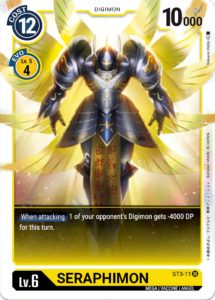 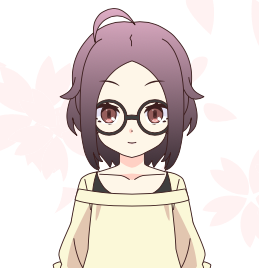 Last week I was playing with my husband and when he played this card, he used the effect on my 4000 DP digimon and then attacks my other suspended digimon, which caught me by surprise because he is able to destroy 2 of my digimons! 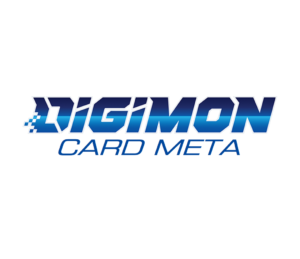 The [ST3-11] Seraphimon can reduce the DP of an opponent's digimon by 4000 when attacking. Let's compare this against other similar DP-reduction effects:

At first glance Seraphimon's effect may look viable, since it triggers on attack hence can be used in consecutive turns. However, when we consider that he only has 10000DP, he will almost certainly not survive your opponent's turn. Furthermore, without inheriting effect from [BT2-035] GeoGreymon, he cannot even destroy most LV4 digimons. With all these being considered puts even SlashAngemon in much better value than Seraphimon. Of course, in the current meta there is simply no competitive yellow decks that does not play ShineGreymon, which should instead by your main nuke instead of Seraphimon.

The only deck that Seraphimon can excel against would be a rookie rush deck, so maybe play just a single copy for that moment? There are better ways to deal with rookie rushes so I cannot recommend Seraphimon for competitive.

Competitive value: 1/5
Art: 3/5 (no offence, but I feel most of Nakano's work lacks pose and details)

We would love to collect your ideas on any digimon cards. If you want to share your ideas on a card, please drop us an email. We will also link back to your blog, facebook or youtube etc.

One thought on “Card of the Week”