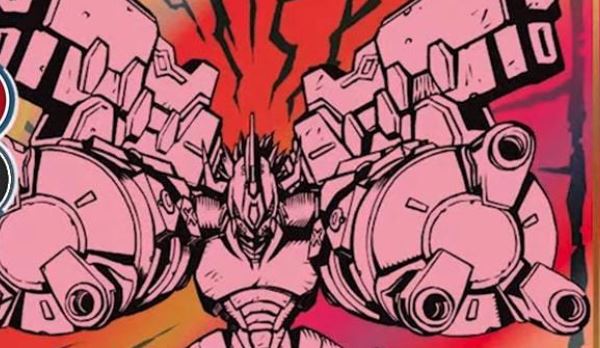 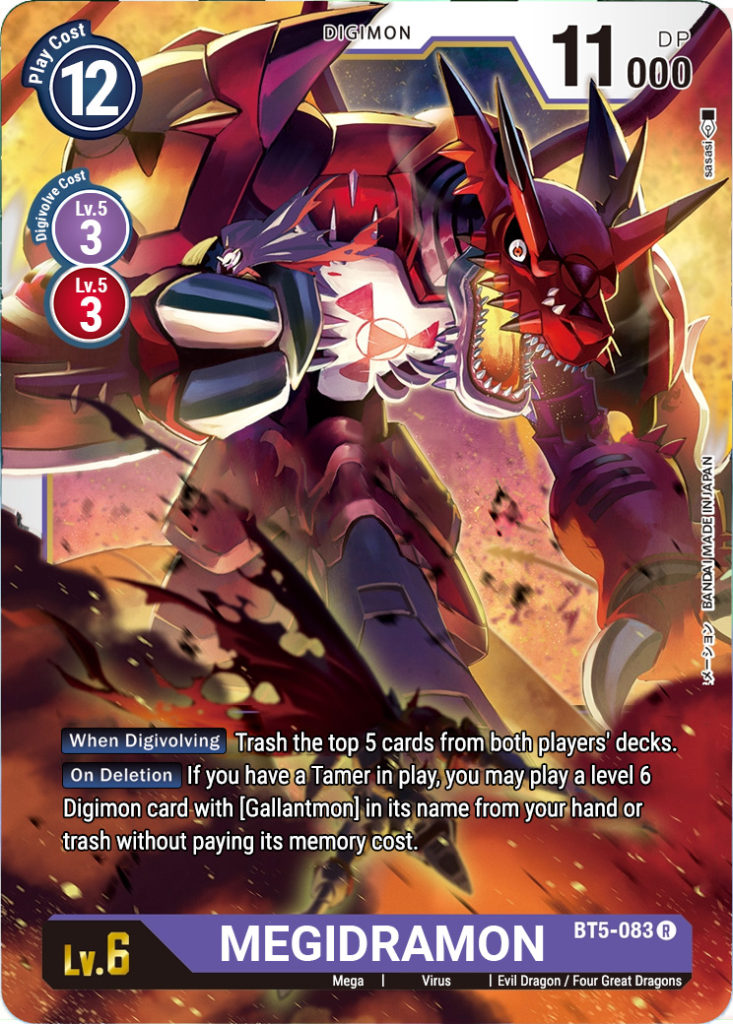 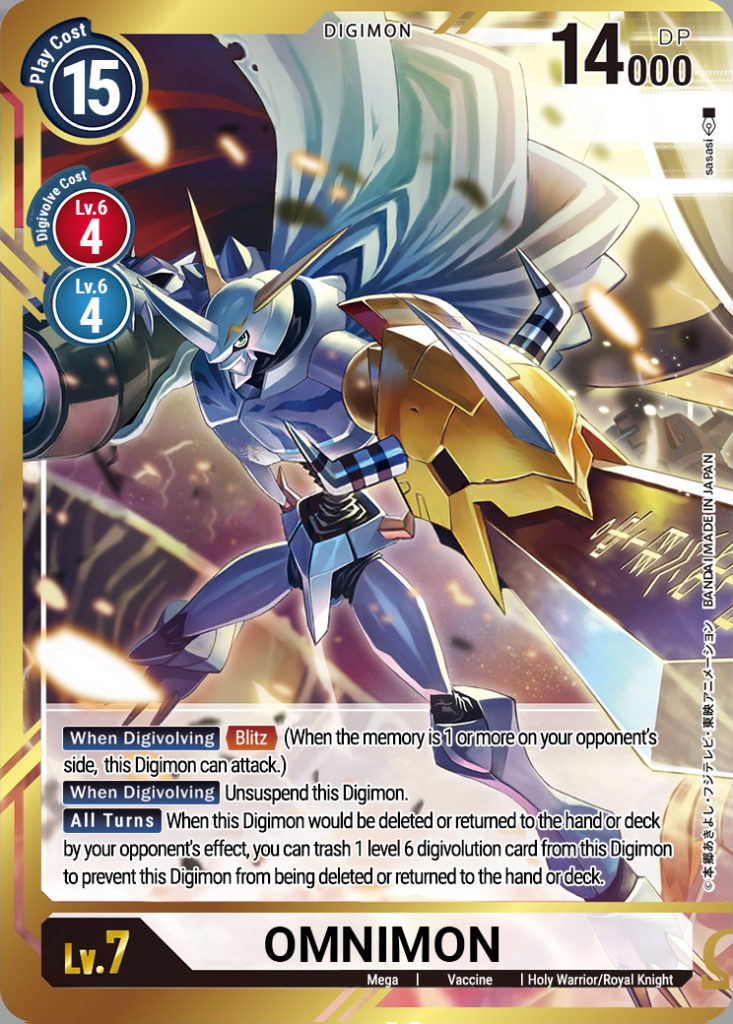 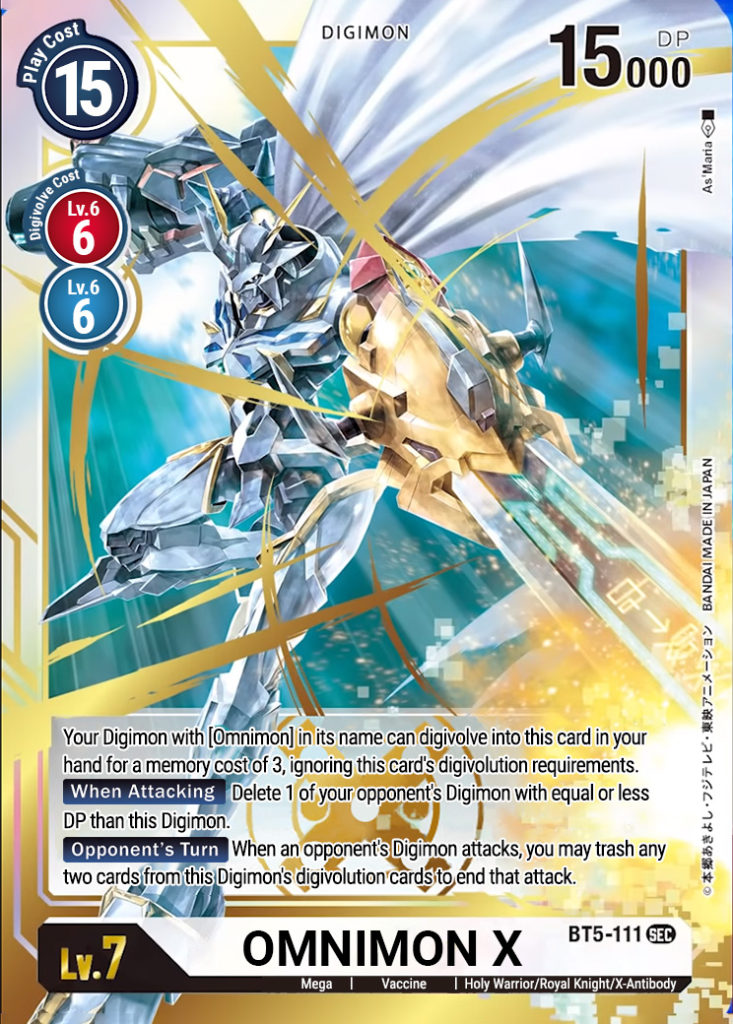 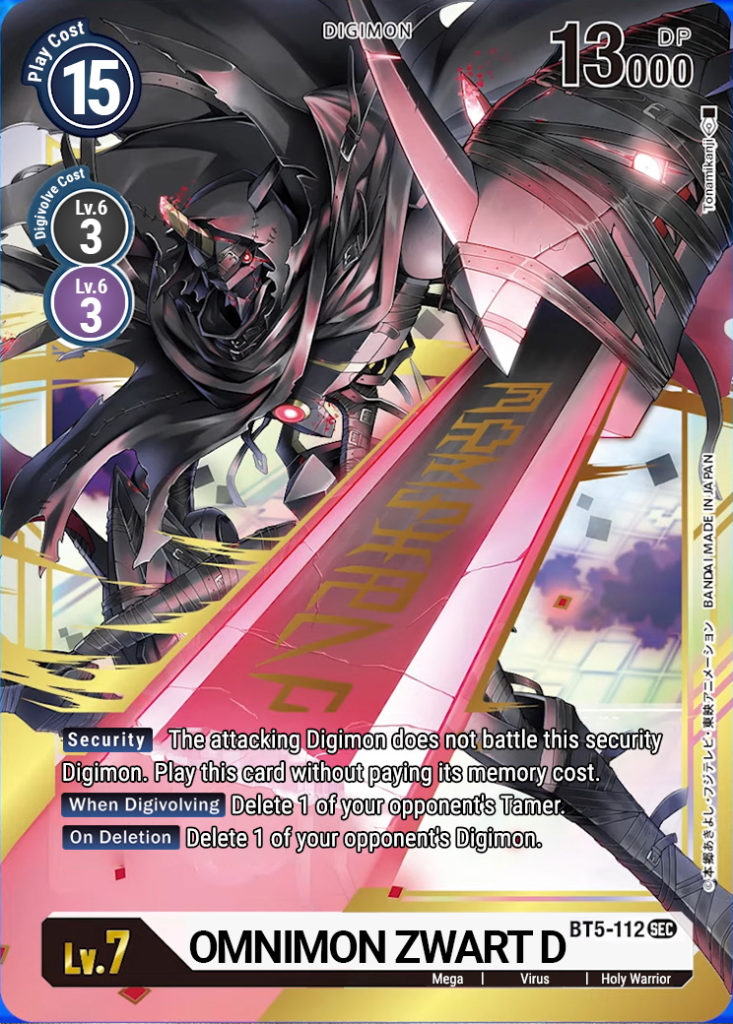 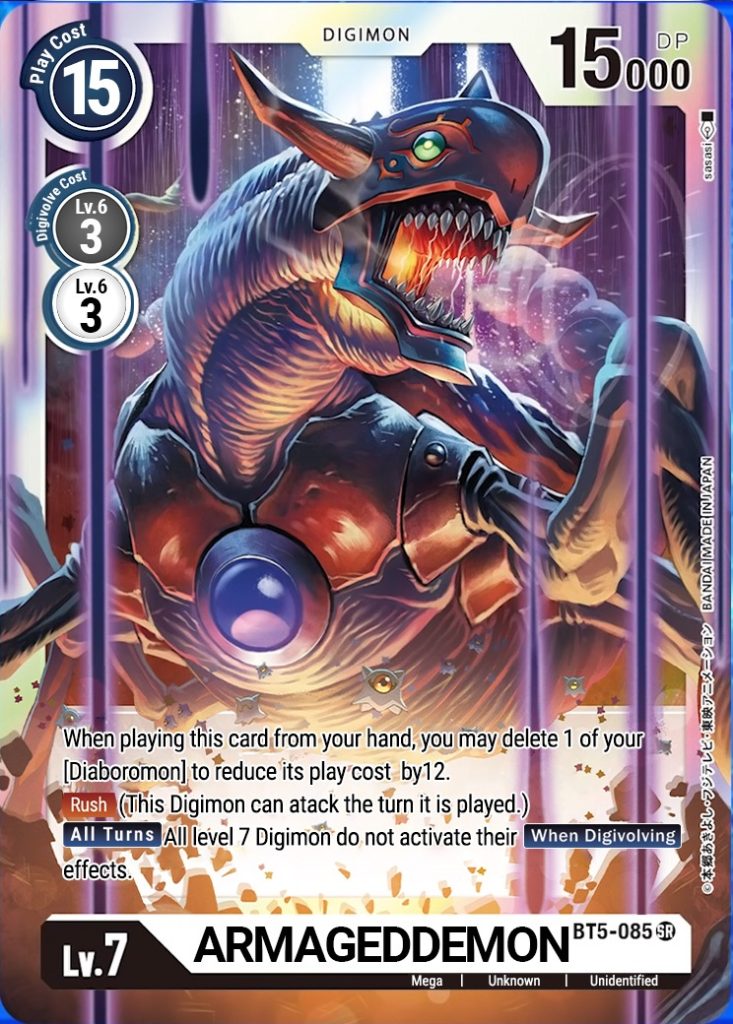 Here are those digimon showing their wills to not be deleted or to revenge you in a worse way. A Megidramon don't care or never care if he is destroyed, because after that he can summon a "Gallantmon" from trash or hand for free. A new Omegamon totally stubbornly wants to stay in the battle, he can trash 1 LV6 under his evolution source to avoid destroying or return to hand or deck, imagine if his digivolution source is Shoutmon DX base, how many LV6 digimon would be there.. Or a Omegamon X antibody can end opponent's attack by removing 2 cards under his evolution source, so we say your digimon powerless against X-antibody.

Other than that, we have a cheap to digivolve LV7 Zwart Defeat, if he dies then somebody needs to follow him to the graveyard, the thing is it is other graveyard, not his (the other side). And last but not least, the 15000DP LV7 digimon Armageddmon, you LV7 digimon with powerful "when digivolving" effect is pointless to appear if this digimon is still in the battle.

De-digivolve is available for red and black colors, the most famous is BlitGreymon and Omegamon Alter-S. 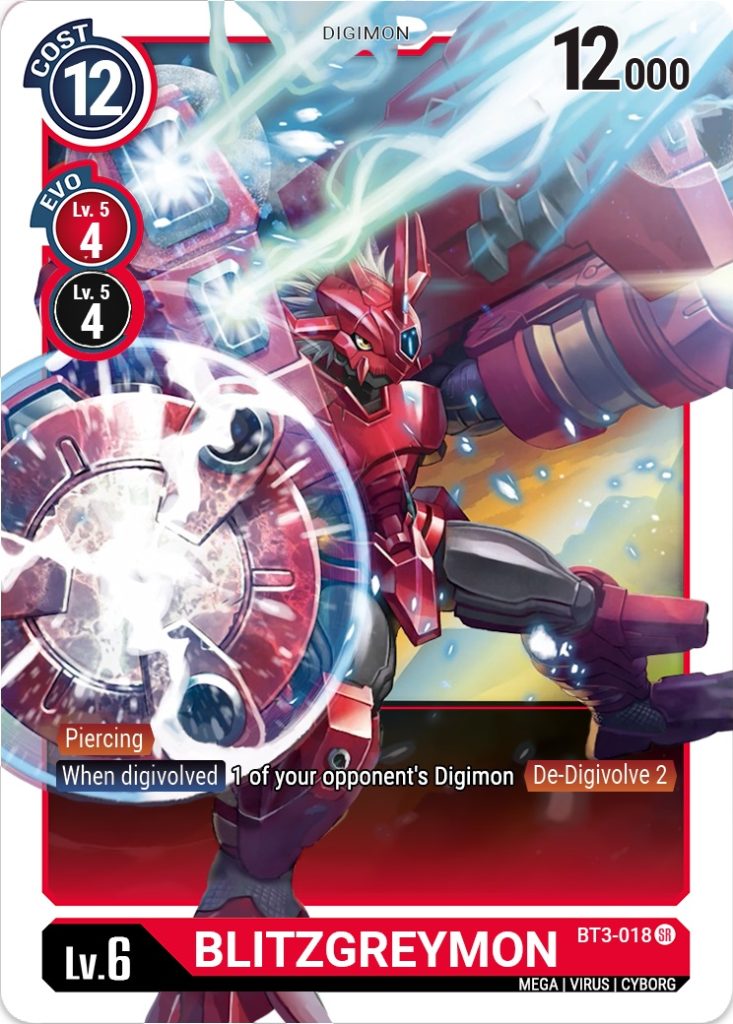 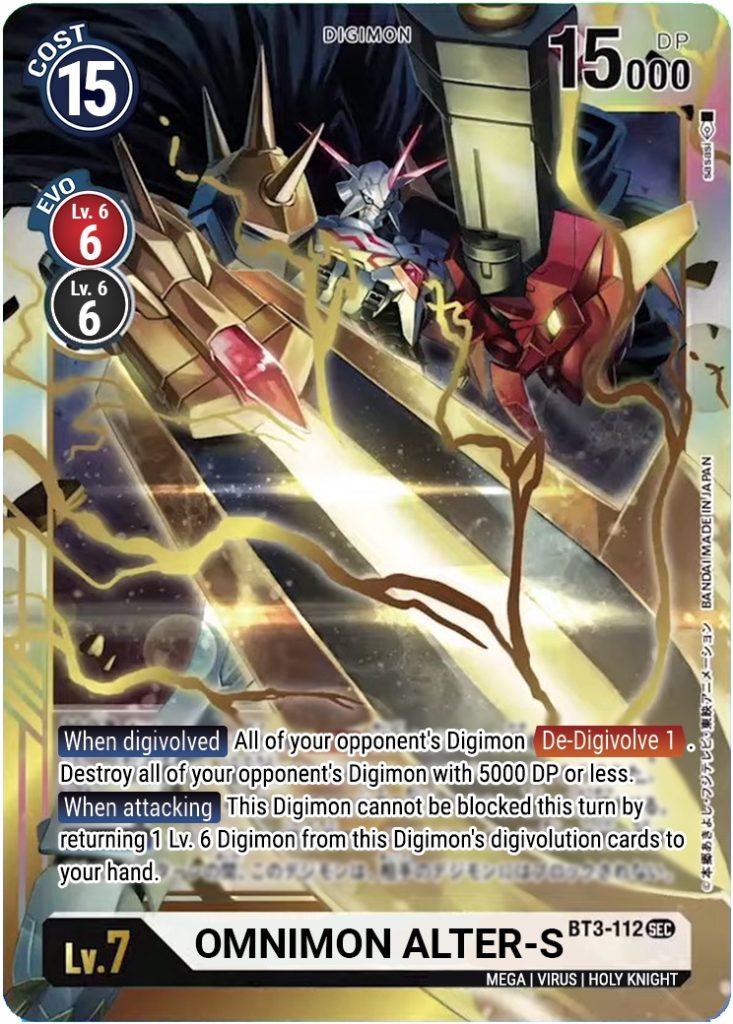 BlitzGreymon is a lv6 digimon with 4 cost to digivolve, it is quite useful during BT3 meta. He can trigger "De-digivolve 2" to one of opponent's digimon when digivolving. The Alter-S is the same, the "De-digivolve 1" is activated "when evolving" and destroy all of opponent's digimon with 5000DP or less. BlitzGreymon and Omegamon Alter-S both can be used in red Omega deck with Nokia White Tamer, or in black deck with Ragnalord or BlackMetagarurumon.

The answer is No, any deck can use this ability with this combo. 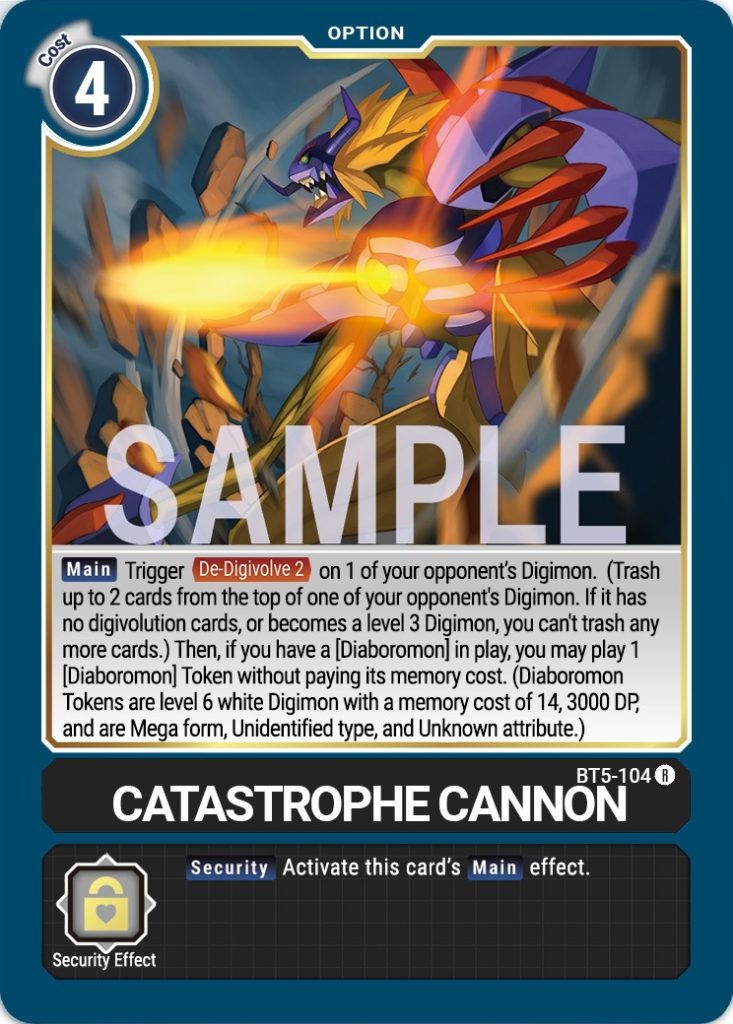 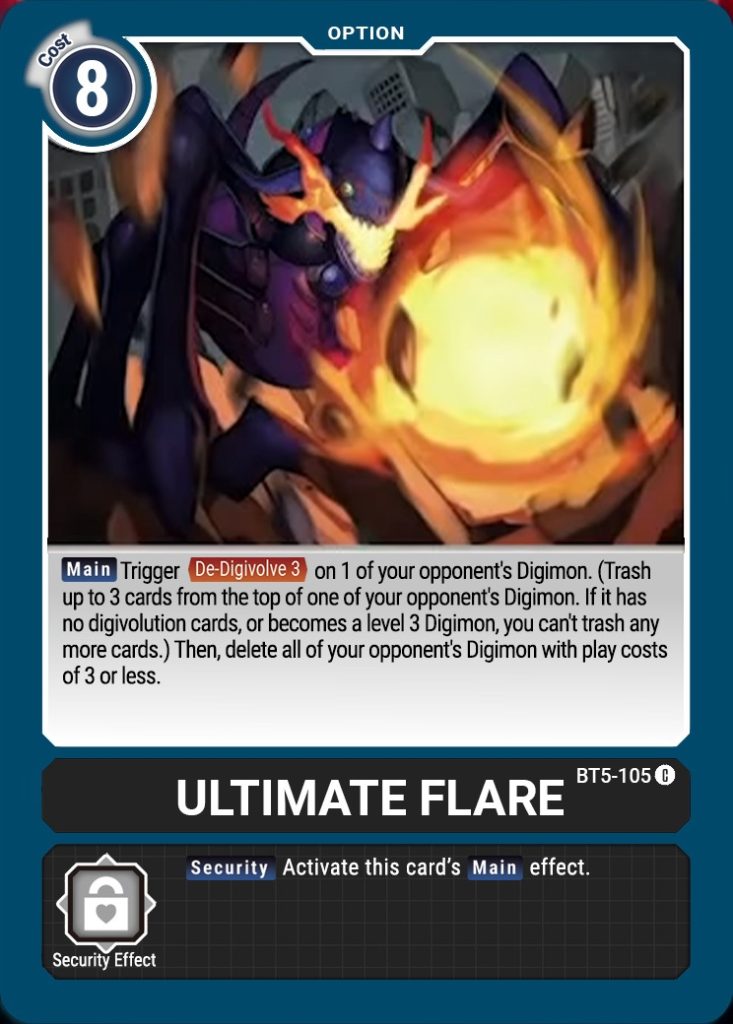 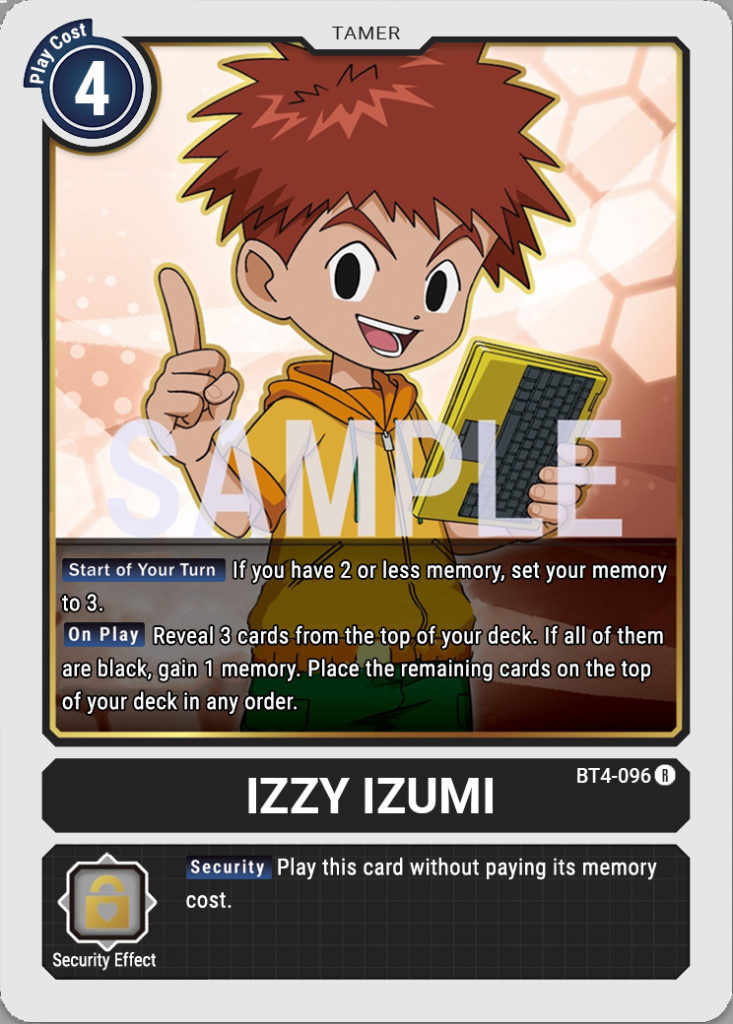 There is 2 new black option cards are introduced in BT5 that provides "De-digivolve", those are Catastrophe Cannon and Ultimate Flare. Both of them are useful and good to have in the black deck. Paying 4 cost to de-digivolve 2 or 8 cost to de-digivolve 3 to an opponent's digimon seems a bit expensive for these days meta, but sometimes it is the only solution that can help your game moving on. Beside de-digivolve, they also give second effect to play a diaboro token (Catastrophe cannon) or delete all opponent's digimon with 3 cost or less to play (Ultimate Flare).

If you are playing other color, you still can use these option cards by adding black tamer Izzy Izumi into your deck. [BT4-096] Izzy Izumi is someone that gives benefit to any deck that wish to know top 3 cards in the deck and sorting them in any order that you wish to draw first in next turn. By the way, since these are different color with all other cards in the deck, you will need to adjust deck distribution properly and not destroy the digimon's level ratio.