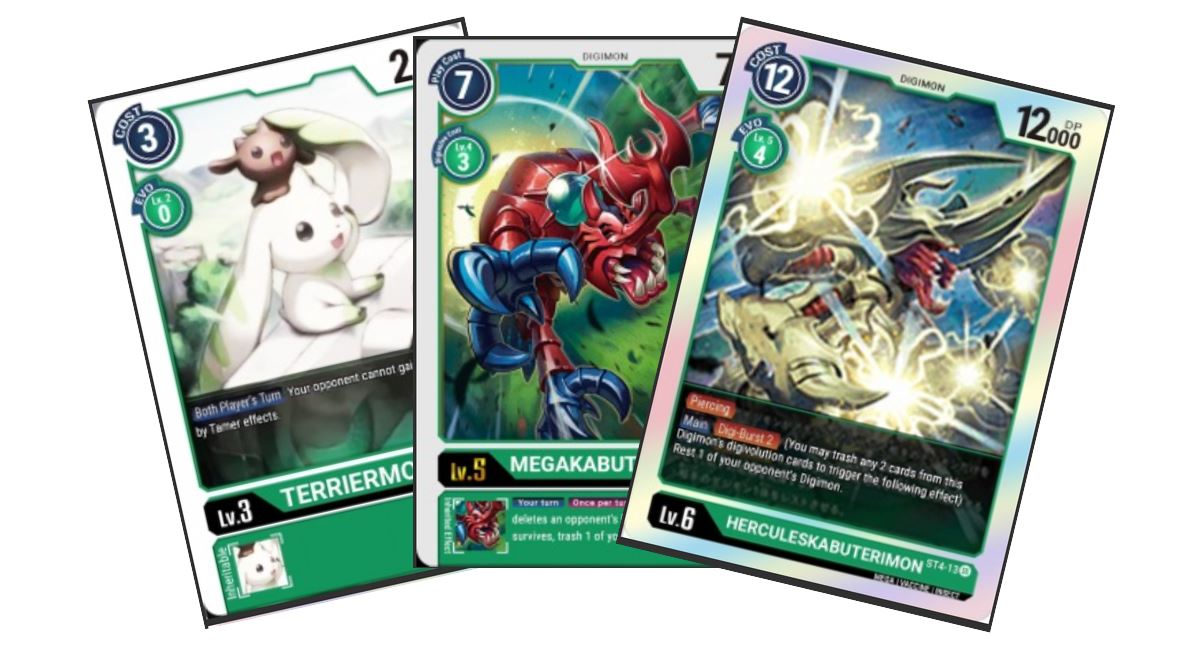 This deck is all about punishing the opponent when they leave their digimons of the breeding zone and establishing tempo by cutting down their stacks, while at the same time hitting their security.
I like to think this deck as a counter-punch deck as it really punishes opponent's mistakes. 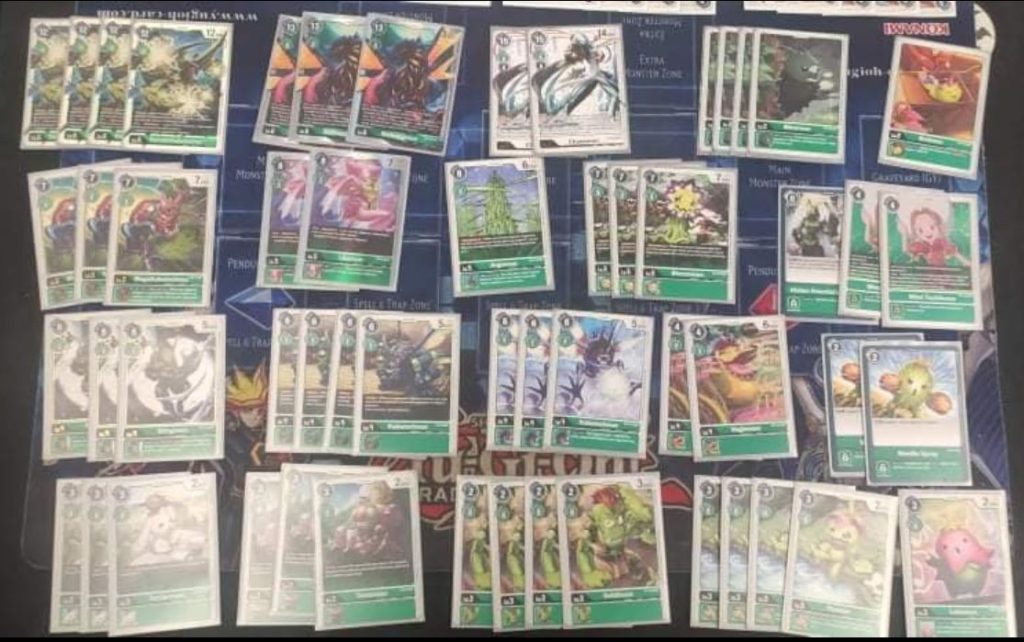 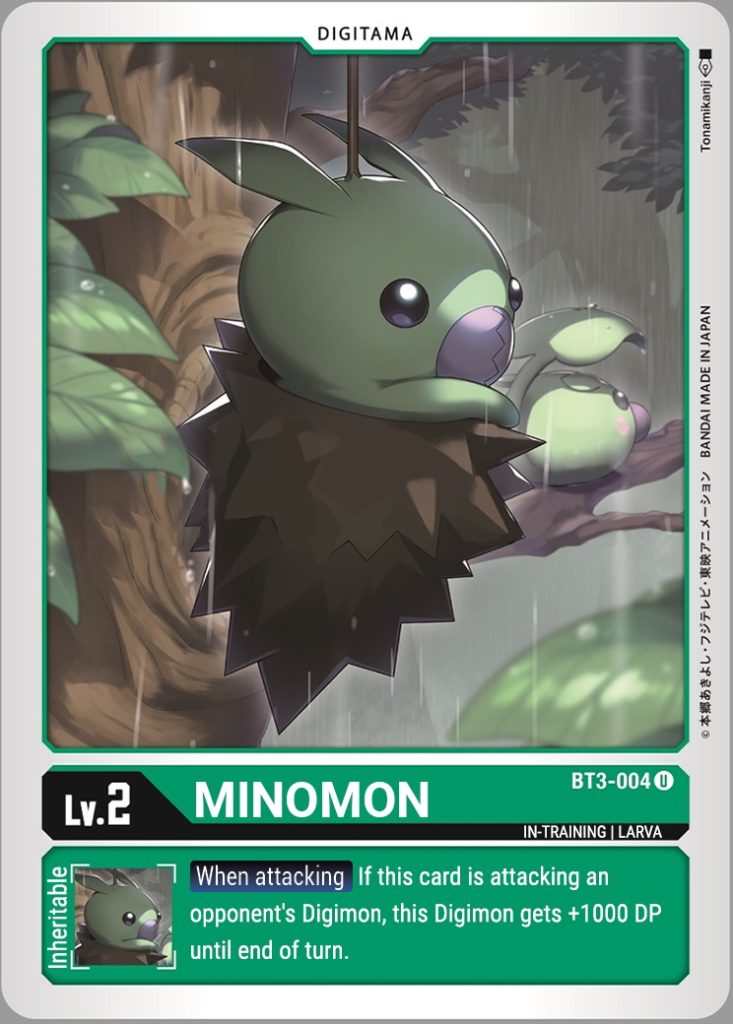 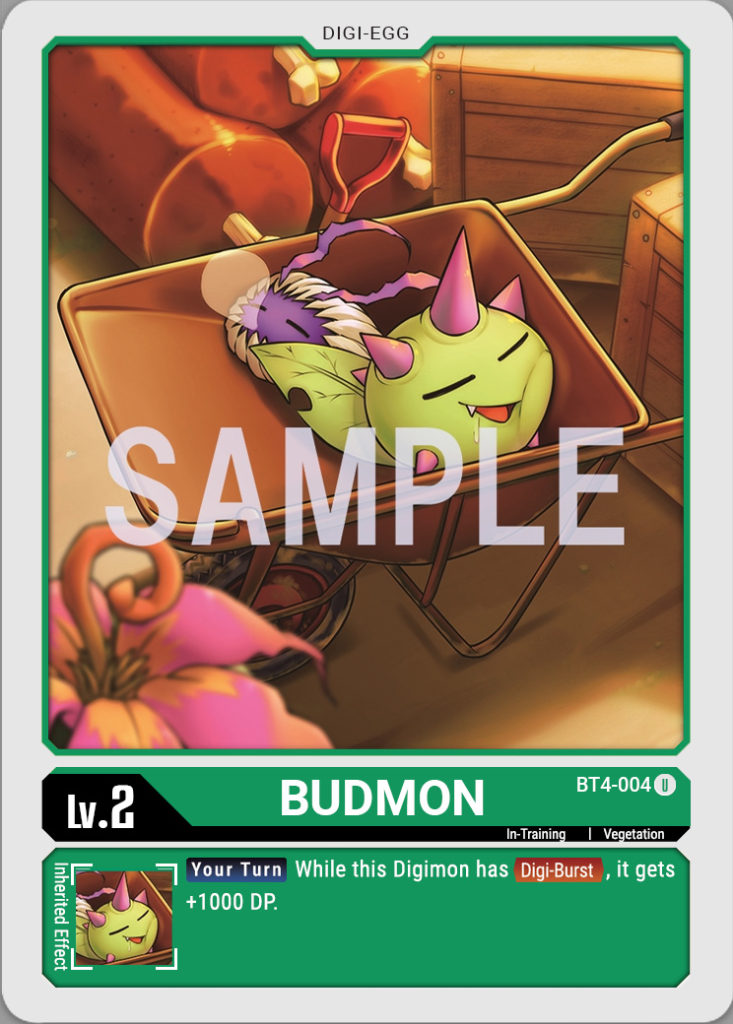 I run 4 Minomons and 1 Budmon as giving the extra DP is crucial for any level digimons in this deck. With the extra DP and the help of Lilamon's effect/Needle Spray/Hercules, any of my digimons can swing over most of the same level or even higher opposing digimons.

For example, with just a Minomon and Kabuterimon inheritance, my MegaKabuterimon swung over the opponent's suspended SlashAngemon today, punishing his play. 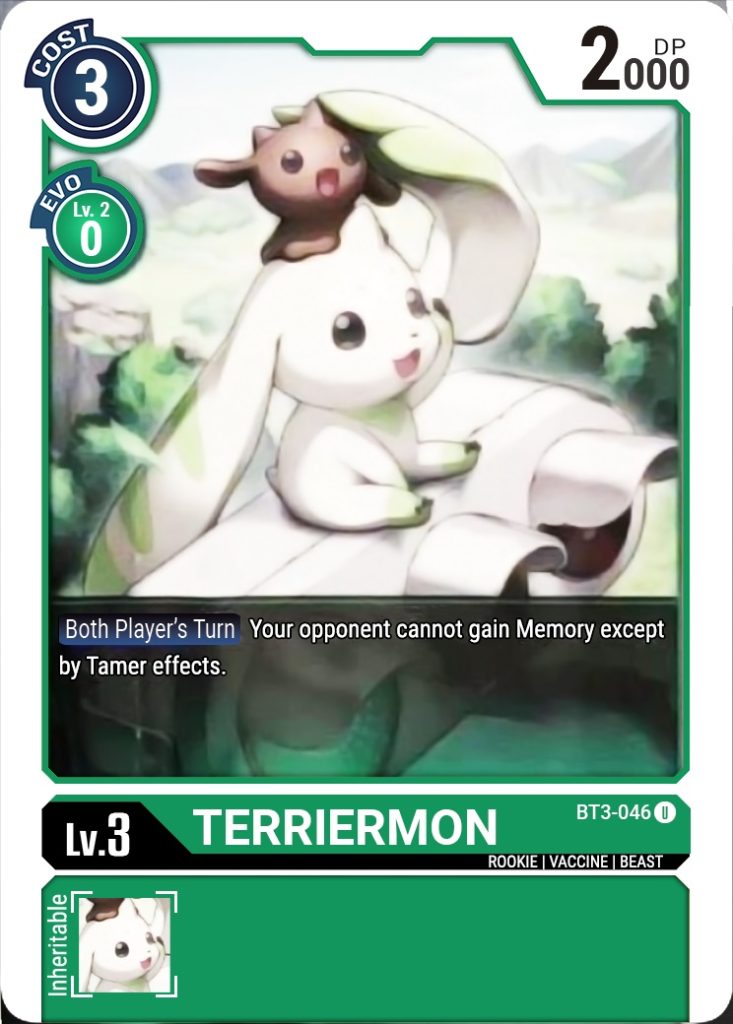 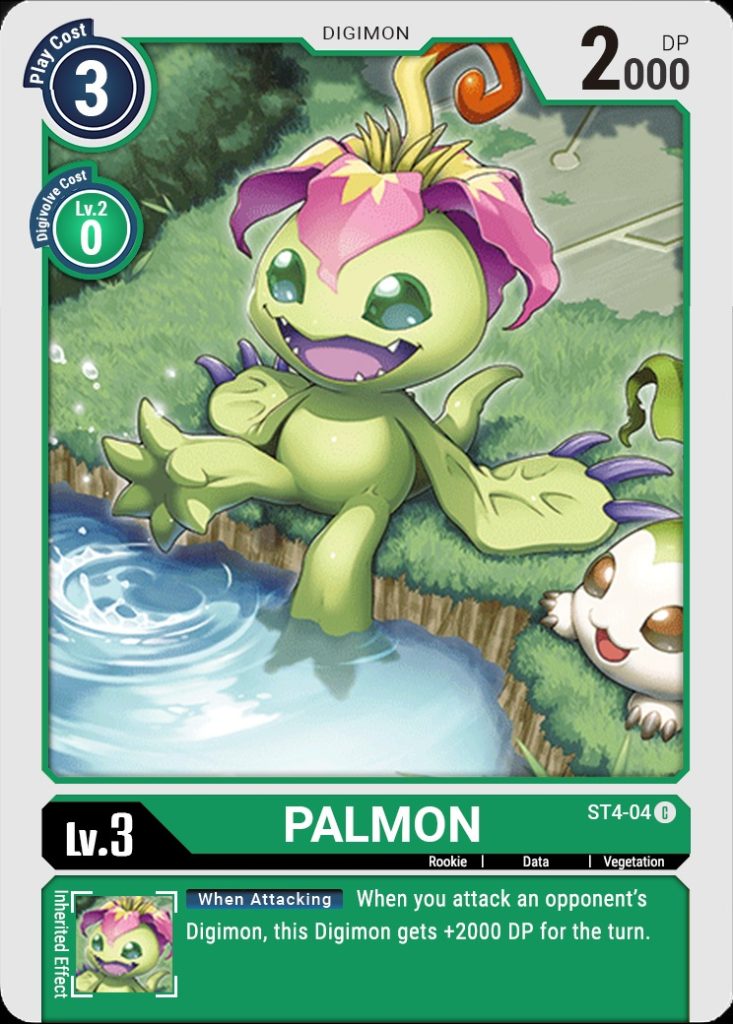 I play 4 copies of [ST4-04] Palmon, as the extra +2000 DP can be super clutch when using Hercules to swing over anything and making safe security checks on pierce. But in my opinion, the MVP rookie for my deck was [BT3-046] Terriermon. I increased from 2 to 3 copies of Terriermon as I expected to run into a lot of Yellow Wargreymon and Blue Imperialdramon decks, which I know would stop their Blinding Rays and Hammer Sparks.

In one match after the opponent played Valdur Arm and cleared my board, I brought out and digivolved into Hercules (had 2000 Palmon inheritance + 1000 from Minomon), hard played a Terriermon and suspended the Valdur Arm with Hercules. When I swung over Valdur Arm, the opponent could not get the 3 memory from Valdur Arm due to Terriermon. 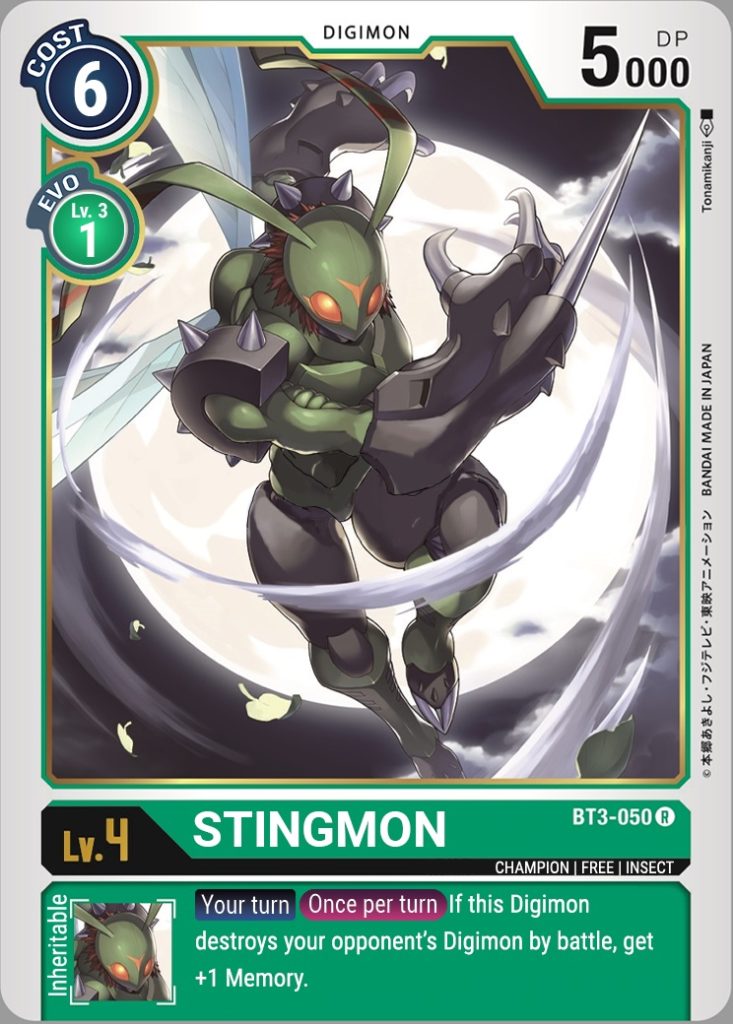 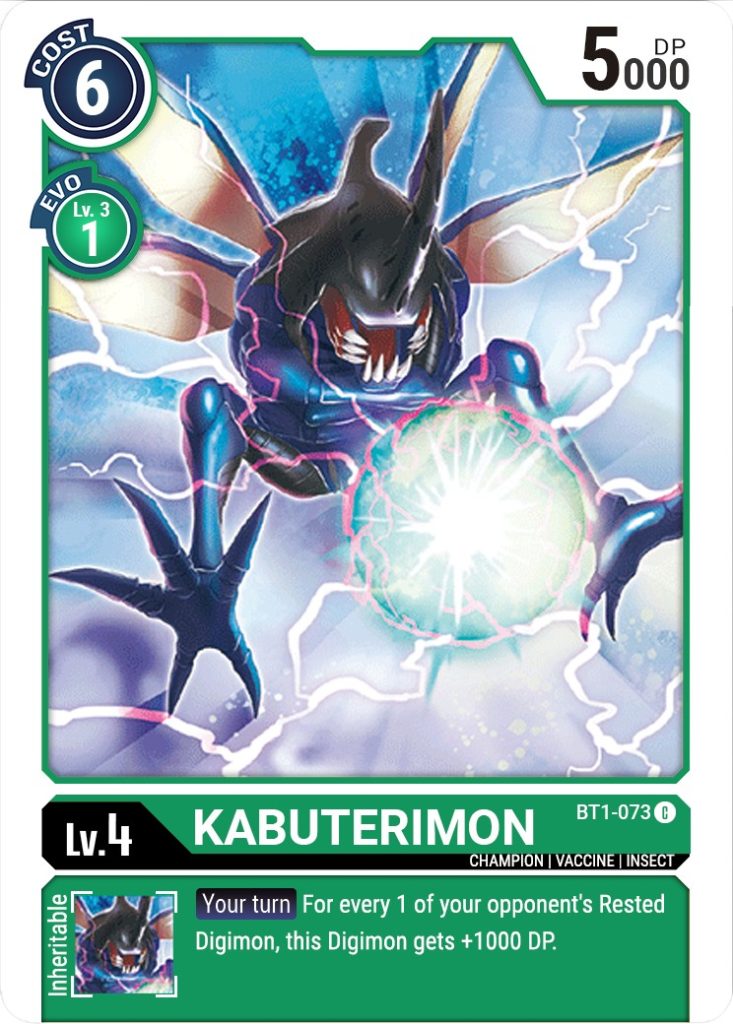 I played 3 copies each of Stingmon and Kabuterimon (+1000 dp for each suspended digimon) as getting one extra memory is nice when you pierce with Hercules, and having that extra DP is always important when swinging over any digimon.

I played 3 copies of MegaKabuterimon as trashing one security when you destroy an opponents digimon is huge for Hercules. I think Green Hercules deck can be pretty low damage compared to Green OTK or Yellow WarGreymon so being able to hit for two securities on a pierce really ramps up. I like to play 3 copies as with Hercules I like to build my stack in my breeding zone, which can be relatively slow, but when it comes out and swings, it can change the board state immediately. Also, with the rise of Security Control decks, I think trashing one security is amazing as you might dodge a scary option card or even a level 7.

This is the result in recent local tournament (Baydragon BT05 Win-a-Box!) I attended and won first place with this deck

Round 1:
Yellow Wargreymon 1-1: In the first game, I managed to pierce through his WarGreymon stack with a perfectly stacked Hercules and swarm the board with rookies to win the game. In the second game it was much closer, at one point he had 3-4 digimons on the field with 1 security. I used Hidden potential to digivolve into Hercules, suspend a digimon and pierce his security, but unfortunately I suspended the wrong digimon when using Hidden Potential and could not close the game. He swarmed me with Wargreymon + Angewoman's effect to play a rookie a couple of turns later. We did not have time for a game 3 so it was a draw.

Round 2
Blue and Purple Rush 2-0: Played against an interesting Blue/Purple Rush deck which featured blue Cerberusmon + purple Cerberusmon werewolf mode combo. First game we both bricked but I managed to build faster and cleared his board and applied pressure by piercing any of his hard played digimon with Hercules. Second game I managed to draw into Terriermon early which I hard played so he was unable to play any of Hammer Sparks. He was memory locked and I just slowly built my board whilst cutting down any of his digimons with mixture of Lilamons and Needle Sprays until I had lethal.

Round 3
Yellow Wargreymon 1-0-1 (1 win 1 draw): First game I made the perfect stack with Hercules and pierced through his stack whilst dealing two damage, and I went into Chaosmon to pierce and did one more damage. He could not remove my Chaosmon from the field so a couple of turns later I took the game. The second game was very long as we both were clearing each other's boards with Nidhogg and Valdur Arm so it ended in a draw. But since I won the first game I took the match.
Round 4
Blue Imperialdramon 2-0: First game I ended up cutting through 3 stacks of Imperialdramon's continuosly when it came out with my HerculesKabuterimon and he could not play any Hammer sparks as I had at least one Terriermons on the field at any time. I closed the game out with board control. Second game he bricked by not drawing into the cards he wanted whilst I had a Terriermon on the field to stop him from playing Hammer Sparks. He managed to build a stack but could only use it to crash into my Hercules to slow me down. But I still had lethal and took the match.
Round 5 (Top 4 now)
Yellow Shinegreymon 2-0: First game he pushed his digimon out of the breeding zone prematurely to get yellow Rizegreymon's effect to play a tamer. I had a Hercules so I could pierce right through and deal two damage, I won the game a few turns later with board control. Second game he pushed out his Red RizeGreymon and it went to my turn. I had a Lilamon with Minomon's inheritance and could suspend the digimon and swung over it. He had to start hard playing digimons after that and I just kept piercing with Hercules to take the match.
Round 6:
Yellow Wargreymon 2-0: Same player as Round 3 so it was a rematch. First game was pretty straightforward as I built a perfect stack with Hercules and continued to apply damage while taking out stacks. In one instance he played SlashAngemon to get rid of my Hercules, but on my turn I swung over with MegaKabuterimon + Kabuterimon + Minomon inheritance. I won the first game with a Needle Spray on his blocker. Second game was a longer game and in one instance he had 4 digimon on the field, including a suspended Valdur Arm and a Piddomon. I managed to Hidden Potential into a Nidhogg and wiped the field, after that I played it slow and swarmed the field with my two Mimis churning out rookies. On the last turn I swung with around 5-6 digimon and he could not block it all.