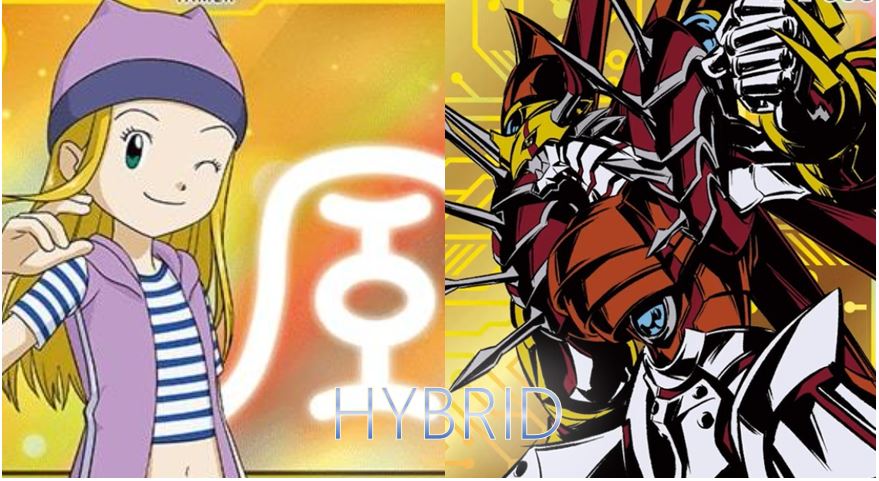 Digimon Frontiers is my favorite season of the Digimon anime series and since BT7 introduced all of the show’s protagonists in the Digimon card game, all I have to do is to build and play a deck with my favorite character in it – Zoe Izumi.

The yellow color has good compatibility with tamers, it also has some of the best tamers in the game like BT1 Takeru and the dual tamer Takeru and Hikari. Because of this color's uniqueness, in theory, should work well with the new hybrid Digimons from BT7. Yellow also has the BT2 Shinegreymon, which is the best Digimon to utilize tamers for control. Combining all of this led to the idea of constructing this deck, the Yellow Shinegreymon-Hybrid Deck. You can also watch a deck profile video of this deck at:

The goal of the deck is simple and can be shown in four points – (1) Play tamers, (2) Recover security with Jet-Silphymon, (3) Control the board with Shinegreymon, and (4) have multiple attacks utilizing the level 4 hybrids.

This deck plays 16 tamers. The 4 copies of BT1 TK and 4 copies of Zoe are there to increase the deck’s consistency. BT1 TK can get fetch any yellow card from the security plus it is a memory fixer. Zoe can fetch a hybrid from the security, increasing the chances of having a hybrid in your hand. The 4 copies of the dual tamer Hikari and Takeru are very important for memory control. In this deck you let your opponent hit first and that can trigger the memory +2 effect of Hikaru and TK giving this deck the chance to have a very large memory to set up explosive plays mid and late game. The -1K DP can also come in clutch to kill small Digimons. I played 4 copies of the start set Takeru, this is good as it is just a 2-cost tamer and it also boosts your security Digimon by 2K. This can also be swapped with 2 BT3 Hikari and 2 [ST3-12] Takeru combinations.
Setting the tamers early on increases the consistency of the deck, gives you more memory and you can utilize them with a barrage of attacks using the level 4 hybrids mid and late game. 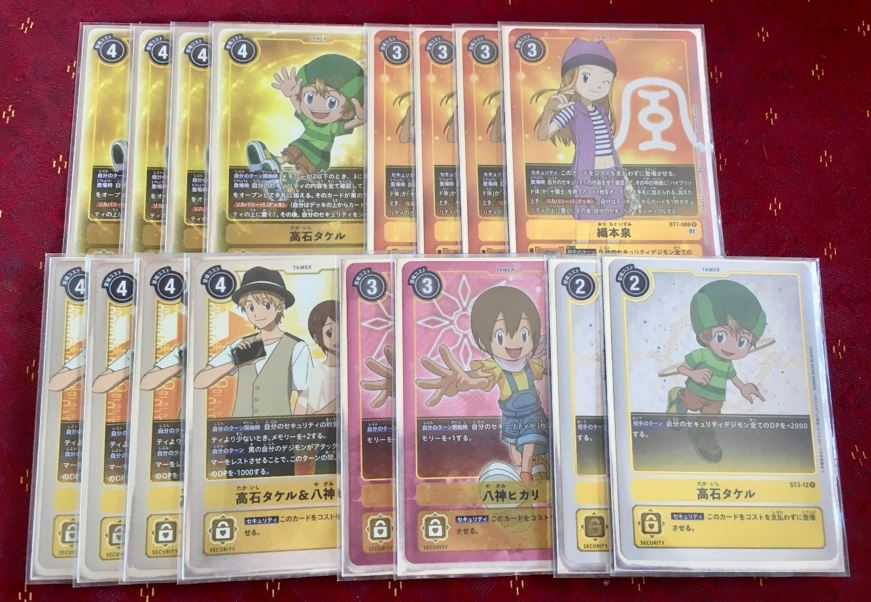 The new level 5 hybrid, Jet-Silphymon, is one of the most important Digimon of the deck. You can evolve it for 1 cost when the Digimon you evolve it from has a tamer underneath and can trigger "Recovery +1" if it evolves from a hybrid, both effects will happen most of the time. This is important because you let your opponent hit your security early game so having a recovery card is good. Another good thing is that it is a 1 cost bridge to Shinegreymon making your minus DP plays easier. 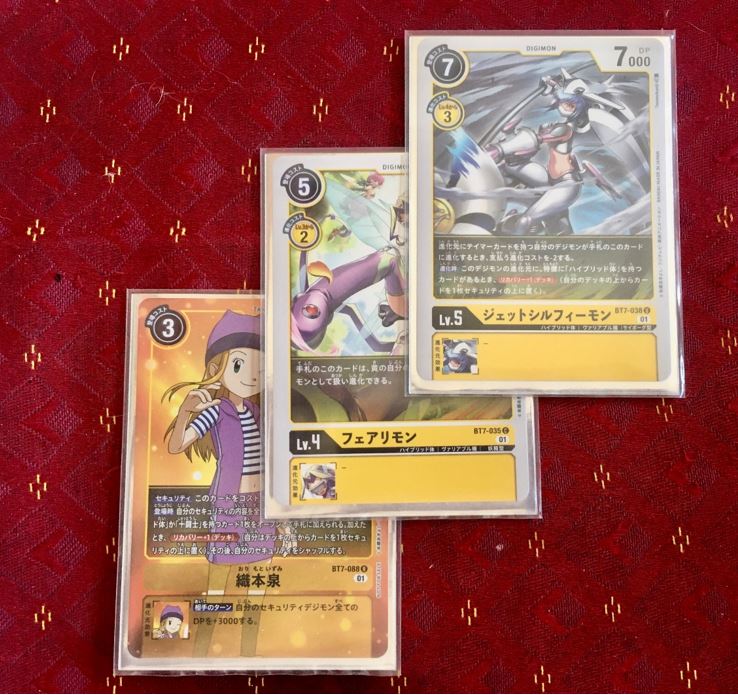 (3) Control the board with Shinegreymon

Since you have many Tamers and you can easily get to a Lv. 5 Digimon through Jet-Silphymon, you can digivolve it into Shinegreymon to clear the opponent’s board easily. 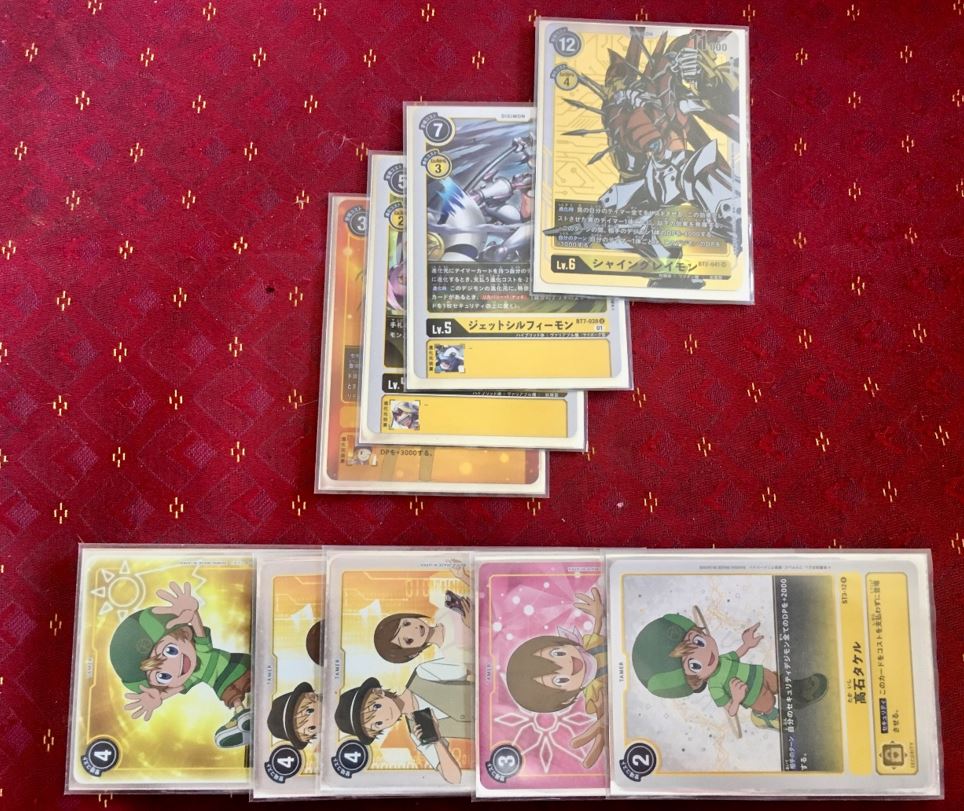 (4) Have multiple attacks with your Lv. 4 Hybrids

I play a total of 8 Lv. 4 Hybrids in this deck – 4 copies of Kazemon and 4 copies of Zephyrmon, both of which evolves from a tamer for 2-memory cost. Since you have lots of tamers and you can gain memory with your tamers (Hikari & Takeru) (and other option cards), you have enough resources to unleash a barrage of attacks – evolving tamers to Lv. 4 hybrids, giving you so much advantage and possibly win the game. 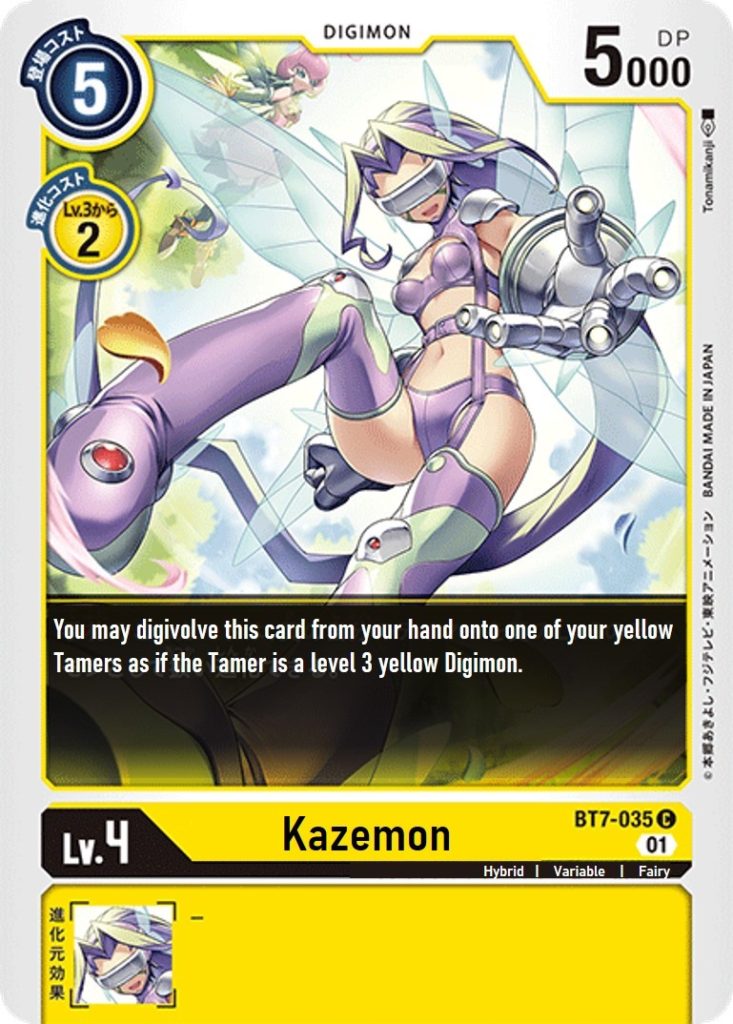 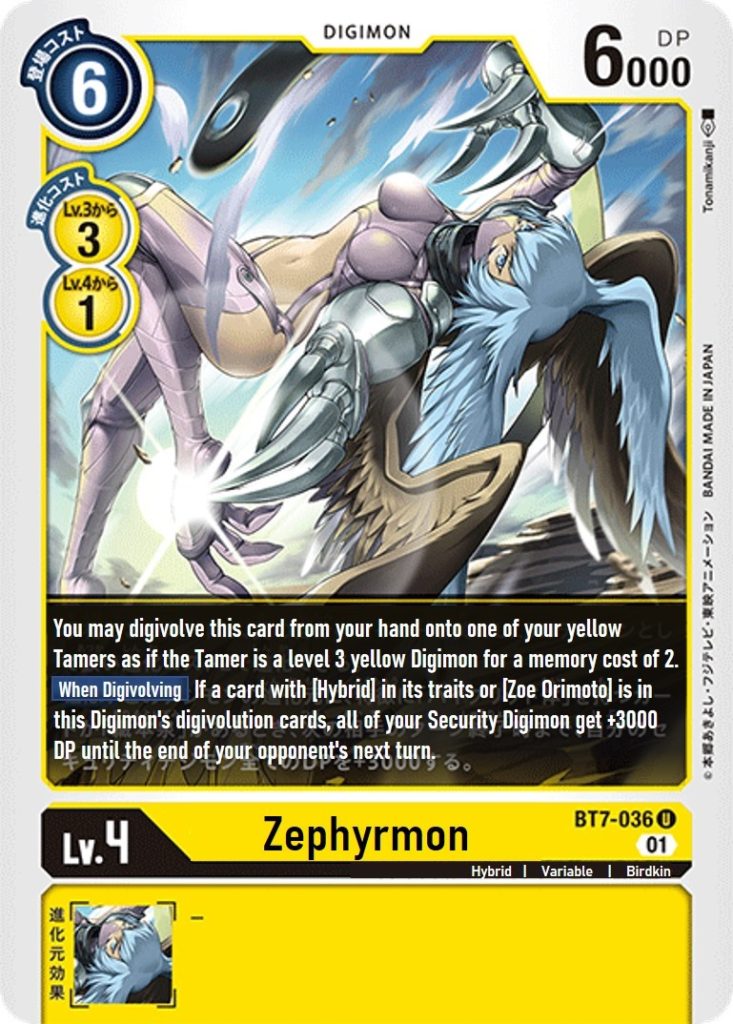 Other cards in the deck:

Bokomon – Bokomon is there to search for tamers and your Hybrids, it is a staple for all the hybrid decks out there. Its other effect to lets you gain 2 memory when you evolve a tamer, making the evolution cost basically free. Leaving a Bokomon alive in the board against hybrid decks is really dangerous which is why it is a usual target for early removal effects.
Patamon – Patamon is there to fetch your tamers, it can also be used as a free evolution for an extra draw.
Upamon – The Digitama of the deck allows you to draw when your Security is less than 3 which is most times.
BushiAgumon – It is there for sneak plays to end the game, but I might cut it and play 4 Patamons instead. Although it can be clutch in the end game, it still uses 5 memory which is too much since you can use that memory to evolve 2 Lv. 4 hybrids already.
Rizegreymon – You won’t get Jet-Silphymon all the time and this is the reason for playing Rizegreymon, not only that it is a versatile Lv. 5 with an ESS of "Security +1" when you have 3 or more tamers, but it also allows you to play a tamer for free.
Sakuyamon – One counter for this deck, especially in red decks, is to build a big Digimon in the nursery and have it attack for multiple security checks and end the game with an OTK. Sakuyamon stops that together with the potential OTK with the rush decks like Agumon BOC and Gabumon BOF.
Susanoomon – A good card end game especially if you have spent a lot of hybrids already. It is a big cannon that can destroy a problematic Digimon and can punch for 3 security.
Blinding Light – This card is there to control your security especially if you want to trigger the memory gain with the Dual tamers. This can also be a clutch end game as one Blinding light can give you one extra Lv. 4 Hybrid evolution and attack.
Wyvern’s Breath – This is to clear out problematic Digimons and counters for this deck. E.g. [BT5-058]Argomon – this card can completely stun this deck as you won’t get the minus DP from Shinegreymon and your tamers can’t evolve to attack since all of them will remain tapped as long as Argomon is in the field.

Overall, the win condition of this deck is simple and easy to understand but executing it is not that easy. You may have to assess the board state and execute the plays at the right time. You can’t be too passive or you’ll lose because there are a lot of aggro decks these days. This deck requires a lot of playtesting and getting used to. I can’t say that it’s one of the best decks out there, but it is the deck that I have the most fun playing with.

Color Match-Ups
Vs. Red – This is one hard match-up as the red hybrid is really fast. If you can’t answer their early game charge especially the 3 checks with Ancientgreymon, you will lose that game, otherwise, if you survived and controlled the board and made it to mid-game, there is a high chance that you can win especially if you can do a memory choke against the red player. The only problem late game is that there is a chance for the Kaisergreymon "Blitz" play which is really problematic.
Vs. Blue – You won’t have a Digimon in the field most of the time so Blue-stun is not really a problem. The real problem is that Blue has a decent speed and it has Hammer spark and Ice Wall so you have to plan your plays carefully.
Vs. Green – Green is a low-cost ramp deck because of Junpei and the download ability but as long as you can control the board, you can gain an advantage with this deck. The real problem is that if they are playing Argomon through download which can really stun the Shinegrey-hybrid deck.
Vs. Black – Black is slower and needs set-up which is favorable for this deck. You need to clear out blockers like Mechanorimon as it can stop your multiple attacks since it is a 6K DP multiple stand blocker, 7K with Taichi.
Vs. Purple – Purple decks like to attack the security early game which is good for this deck because there is a high chance of them hitting tamers from the security. Their Digimon won’t die as well if they hit a tamer which is not the optimal outcome for a purple player.