Lordknightmon has always been a dominant face of yellow ever since its appearance in bt5. In a game where you manage your resources, memory is the biggest factor of the game. And Lordknight being able to play a card for free given the condition is met has always been one of the best resource cheats.

As a yellow player, I made a guess that Shine-yellow hybrid and Lordknight will be the face in BT7 format. However, the lack of usage for Lordknight surprised me and I decided to bring it to my local.

Hybrid is the dominant force in BT7, and their engine tends to run Bokomon, memory blockers, and maybe evolution cost-reduction blockers. Strong in their own rights, their low DP tend to put them under the radar of many nuke decks. Lordknight can do it without any option or tech cards as Knightmon's -4k DP is a great solution while also being a staple in the deck.

What give Lordknight a push in this set is the release of electric rush. At 3 security you are able to restand your Digimon (usually Lordknight) and gives +3k DP to any one of your Digimon.

This means that Lordknight can spawn even more units while dealing damage!

How to play this deck

The question is how to maintain your security at 3: lucky for yellow it has no shortage of such tools.

If your security is more than 3, you can reduce it with BT6 Pulsemon, BT3 Lopmon, and/or BT4 Blinding Light.

If your security is at 2, a Lucemon would suffice.

If you are at 1 or 0, use Binding Light if you have a Takeru on the board, evolve a Knightmon into a Kazuchimon to recover it back to 3.

Once you are at 3 security, feel free to go on a rampage! If you inherit the BT3 Angewomon, each Lordknight attack will cough 2 units, which will quickly pull you apart from your opponent's hard resources (unit on the board). In addition, the BT3 Upamon, BT7 Pulsemon, promo Pulsemon and Electric Rush will give you the resources to fund Lordknight and Angewomon. 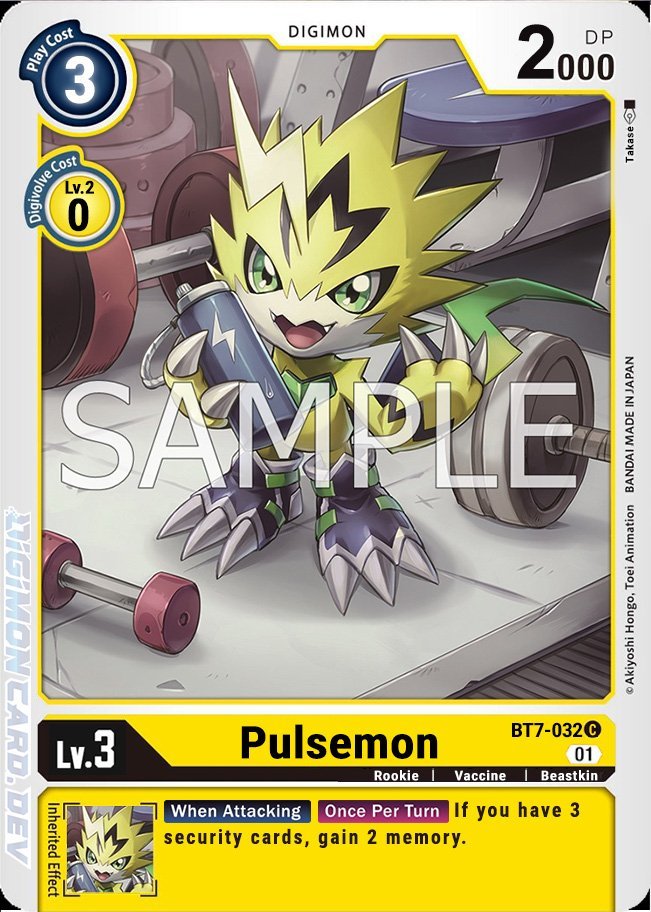 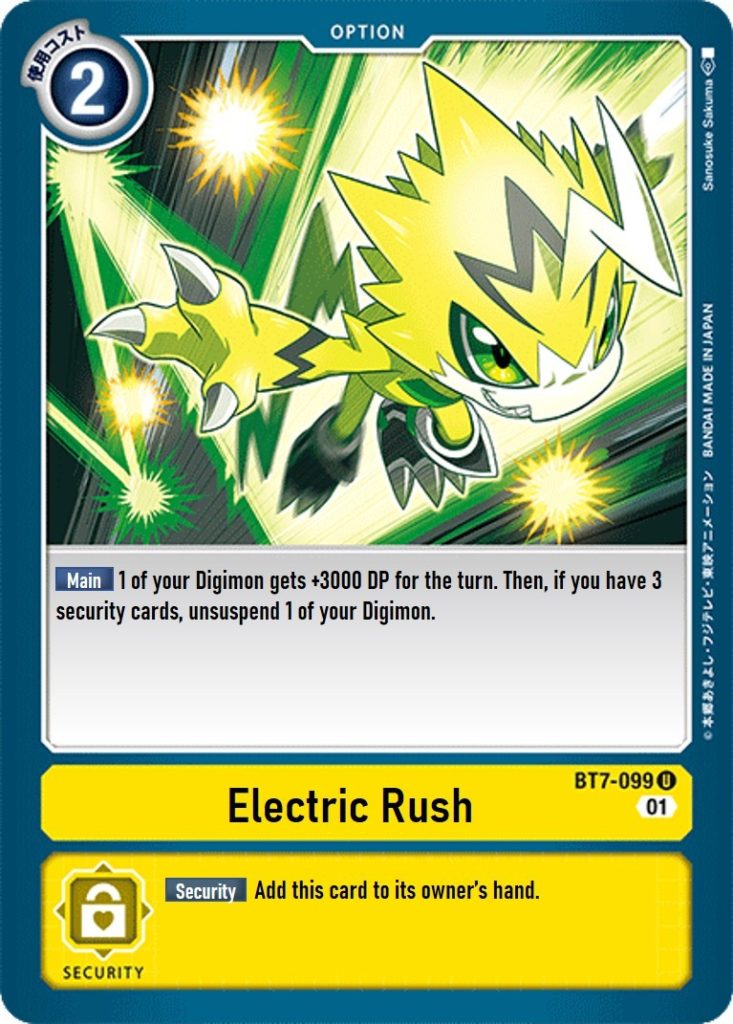 Currently standard digivolution decks, while not as explosive, have better memory control over hybrid deck. Hybrid decks, unlike standard digivolution decks, will have to play a Bokomon and tamer (so on their turn will usually require 3 + 3 memory). Digivolving a LV3 into a 1-cost LV4 will put my opponent at 1 memory, and similarly when digivolving into lvl 5. If my LV6 can remove Bokomon then I will be able to establish a strong board presence until they can rebuild.

While the deck is strong against hybrids, it is weak against:

– Security Control: a Lordknight dying to an option or a big Digimon on the first security check is too painful. However, it is OK if it dies to later security checks since you will already have multiple Digimons on the board.

– Nidhogg: the Lordknight and LV3s will be cleared, 'bankrupting your investments!

– Blue Strip: this matchup is kind of dependent on draws, as Azulong can become super cheap, and Hexablau stopping your advancement since units played by Lordknight do not have digivolution sources. Though you can just digivolve and drag the game out with Kazuchi until Spiral Masquerade comes to hand, I do not think that the deck has a good chance if Hexablau is set up more than 2 times. On a side note, using Blue Strip as a tech is relatively effective as well.

Game 1: I suppose my opponent did not expect that I am playing a different variant from most Lordknight decks (the DP reduction variant), so he put me at 3 security in early game, which allowed me to quickly pull away with 7 units in 1 turn.

Game 2: After learning how I played in game 1, he tried to build his board with tamer and lvl 4 hybrid. I cut my own security to 3 and equalizing his security to 3 while deleting his Bokomon with a Knightmon effect. With 3 memory and only 4 hybrid Digimon in trash, he was unable to end me with some luck on my side. Playing 2 atomic inferno, his BurningGreymon performed 3 checks and is required to die on the last check (so he can launch Kaisergrey) which is an impossible condition given that he is 13k DP large.

Playing against Kyle, a friend of mine, was fun and relaxing since we both know each other tricks well.

Game 1: Due to hand brick, I hardplayed an Angewomon on turn 1. Thankfully, he did not have the best hand thus had no way to remove Angewomon, allowing me to digivolve into Lordknight and pull the game away.

Game 2: Sometime quite early in the game, he managed to warp his Koji into Magnagaruru to bounce my Lordknight back to hand (by returning one of his LV6 hybrid). I was unable to stop his onslaught as I attempt to rebuild my Lordknight, losing that game.

Game 3: I had only vague recollections of this game, but I did remember using Spiral Masquerade on his Magnagaruru (which was not warped from tamer but digivolved the traditional way). I pulled away from then on.

You can watch this game on DPP channel (to be posted later).

Game 1: I managed to pull the game apart with Electric Rush and pressured my opponent early in the game.

Game 2: Must be my highest highroll as I opened with the perfect hand. After game 1, David (my opponent) likely thought that it was safer to farm Tamers first. I quickly digivolved into Lordknight and played the BT6 Pulsemon, setting up the condition needed to pull the game away. What left a strong impression was that this was a game where he was perfectly capable of winning (something I did not expect) despite how strong my board has become. He managed to create a condition where he had 8 memory and 2 Howling Memory with 4 tamers, so he would have won as long as he attacks with 4 hybrid Digimons. However, with lady luck by my side, he was 1 card shy from drawing the part needed.