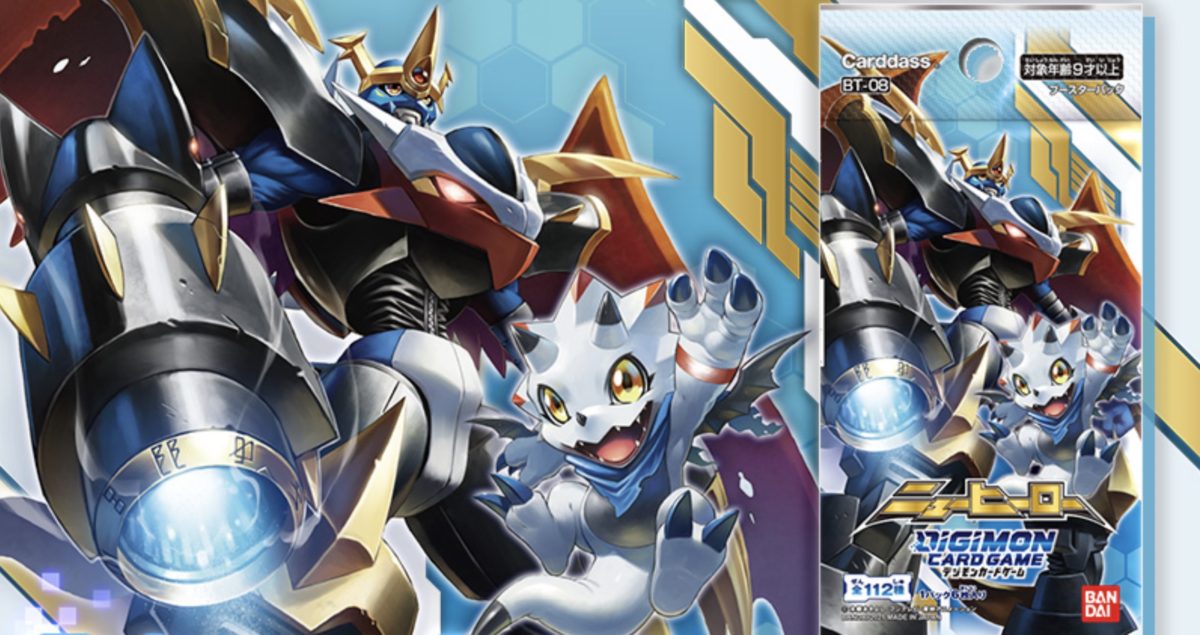 Not exactly a very early review since we are only 1 week away from a full card list reveal, but BT-08 has not been the easiest set to break down. Many cards appeared rather mediocre (at least to us) in the beginning, so we continued to wait for more releases before going into this review.

So far, there are 21 dual-coloured Digimons revealed for BT-08. They do not necessarily mean much, but they do allow many previously unattainable effects to now be stacked. For example, a green LV5 or LV6 Digimon can now inherit [Retaliation], and yellow LV6 Digimons can now inherit DP+ effects from red Digimons. Many more cross-coloured digivolutions can now be explored, and we might see some nice engines as a result.

Armor Purge is an effect exclusive to Digi-Egg Armor Digimons, and a pilot effect in BT-08. While this effect seemed quite lacklustre (at least to us) weeks ago, it now looks to be quite a solid effect, as demonstrated by a proxy gameplay video by the File Island Residents.

The armor digivolutions are pacing to become a solid aggro engine, and should replace the standard rookie rush engine in terms of stability. 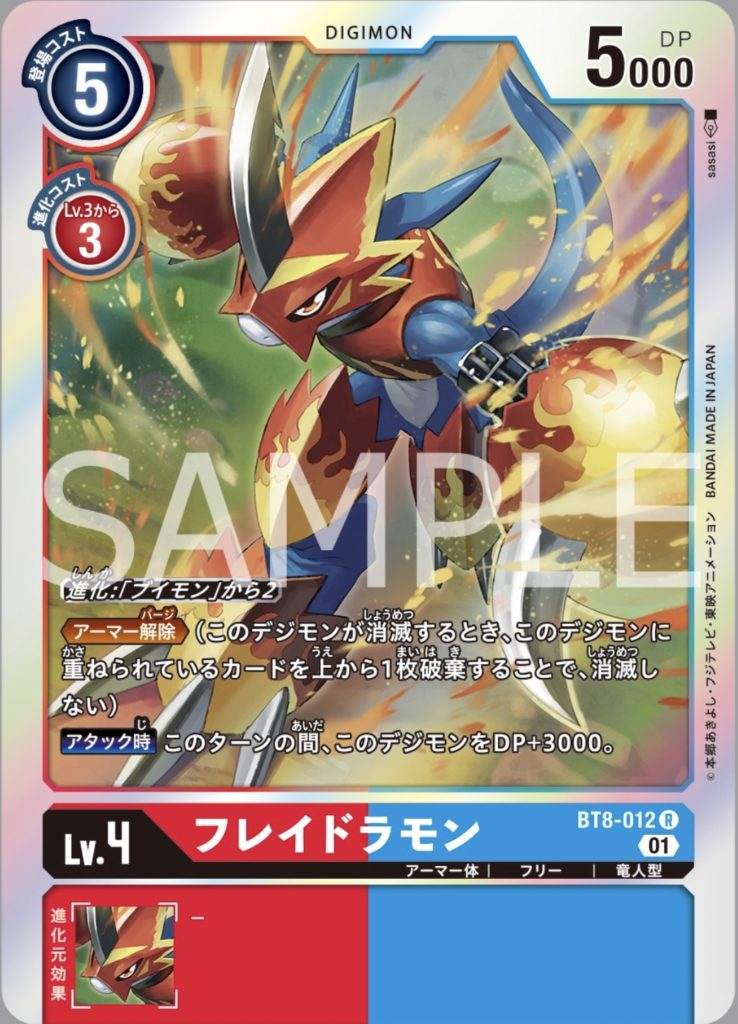 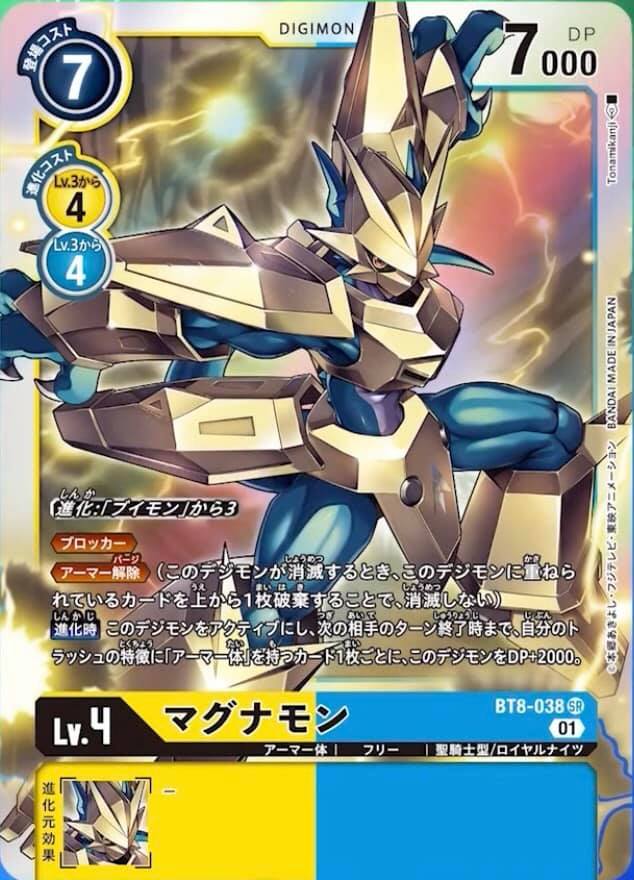 As the main theme of this set, we have 3 new jogress (or DNA digivolution) Digimons such from the year 2000 anime. While they are not super exciting (since we have already tested the jogress effects extensively in ST-09 and ST-10), they do buff up the rest of the colors.

[BT8-042] Shakkoumon is also a very solid card, having both a recovery and board control mechanism in place. He should also do well with the yellow [BT4-048] Wargreymon. 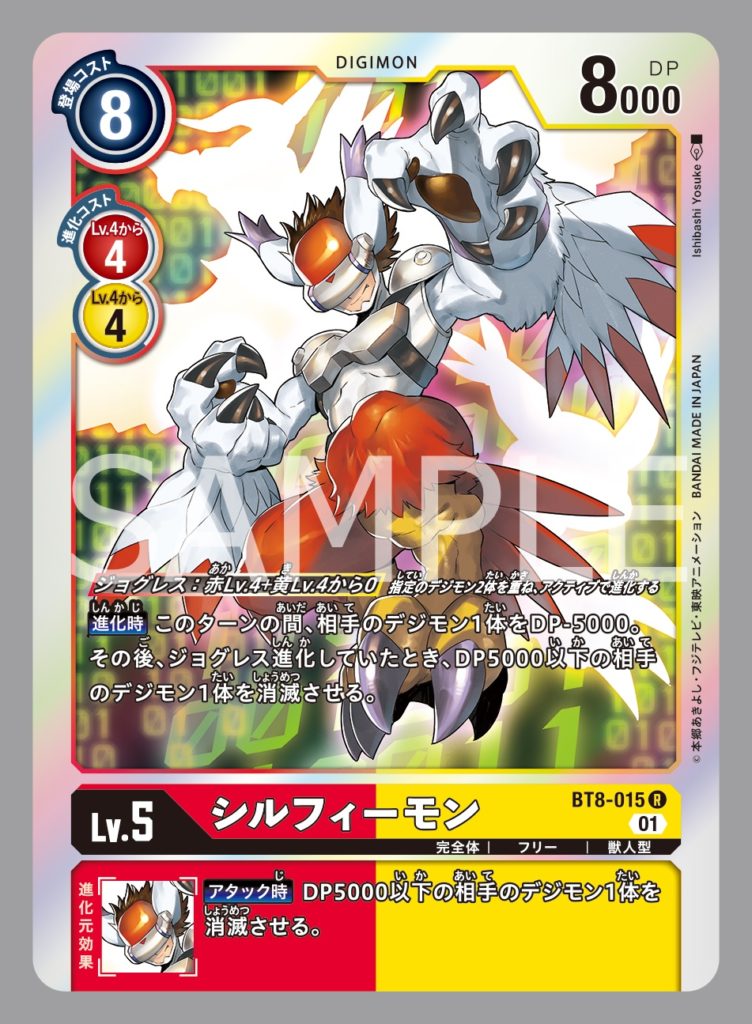 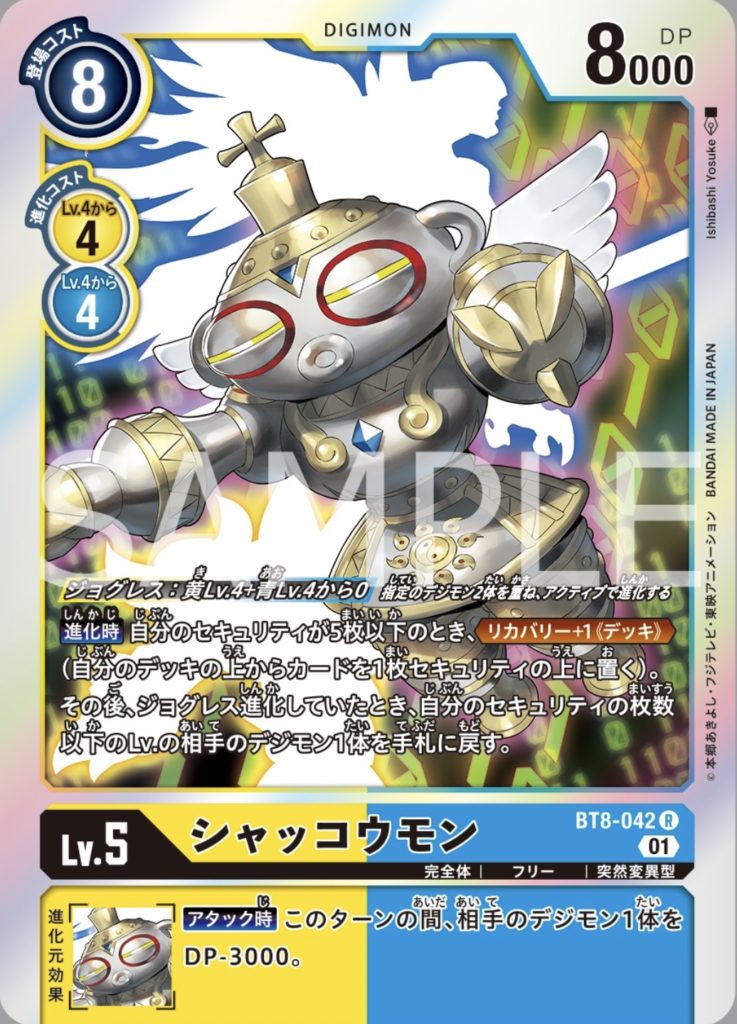 As for [BT8-084] Kimeramon, he is possibly the first card that allows bridging any colors together, allowing previously incompatible effects to be fused into potentially deadly engines. One such engine was raised by  @ageno81040409 on Twitter, fusing Kurisarimon's effect with Eosmon for a deadly aggro loop. 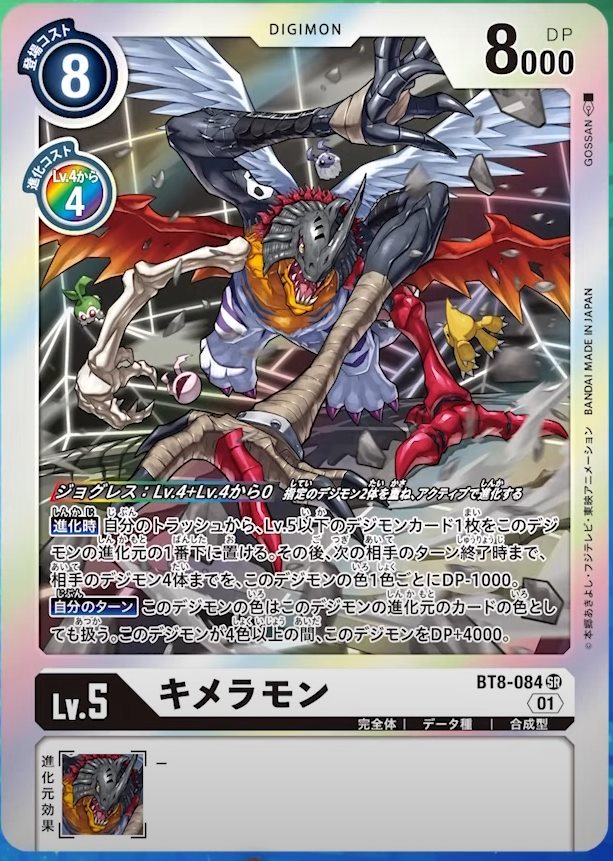 A green Pulsemon digivolution line has been revealed, moving along Exermon, Pistmon, and Shivamon. [BT8-057] Shivamon is a highly raved card, being the first Digimon to be able to disable option cards. This should put pressure on security control decks! 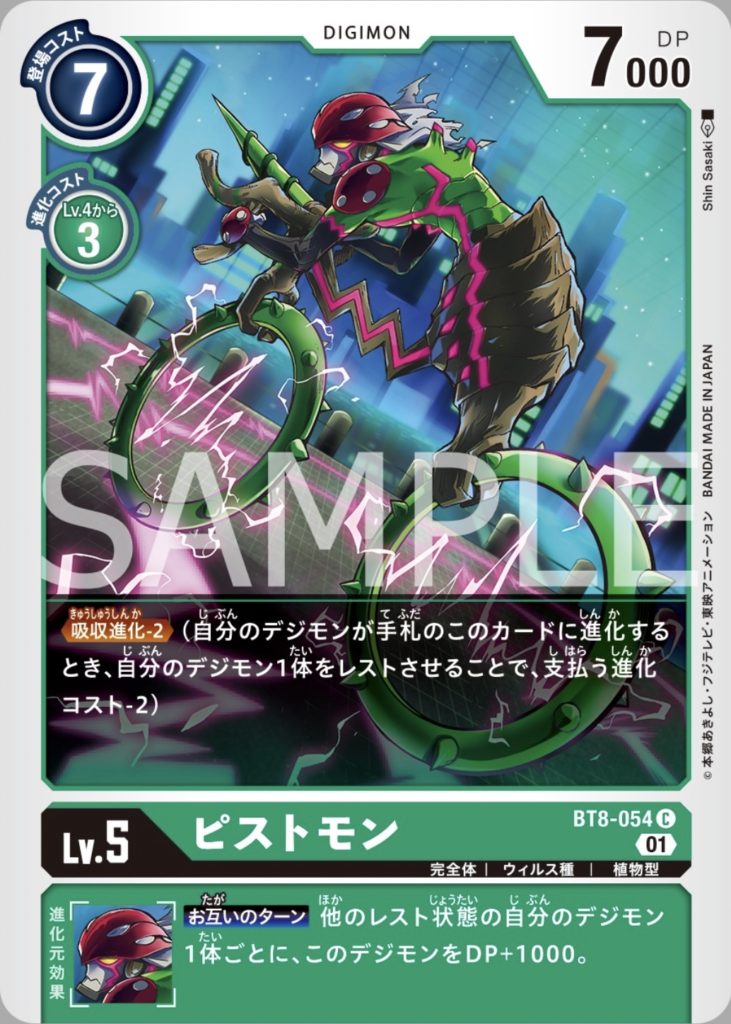 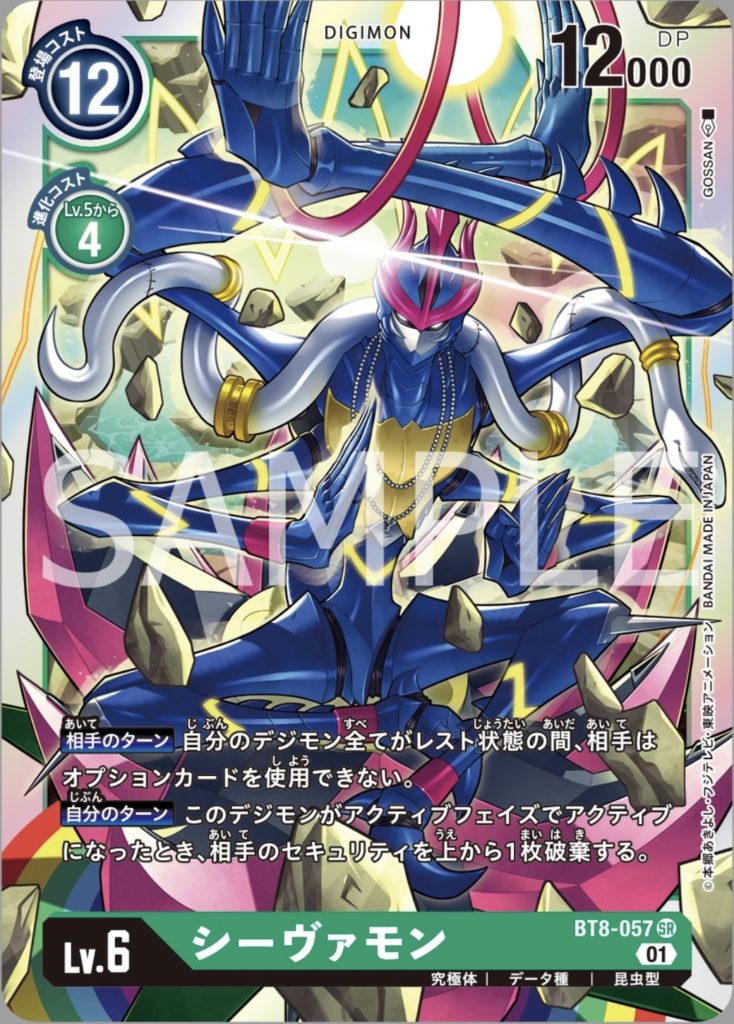 [BT8-054] Pistmon
Effect: [Digisorption-2]
Inherited: [Both Turns] For each of your other suspended Digimon, this Digimon gets +1000 DP.

[BT8-057] Shivamon
Effect 1: [Opponent’s Turn] If all of your Digimon are suspended, your opponent cannot play option cards.
Effect 2: [Your Turn] When this Digimon is unsuspended during your unsuspend phase, your opponent trashed 1 card from the top of their security.

We now have new line of black Agumon to Wargreymon, with [BT8-067] Metalgreymon being the highlight of this line. With an inheritable effect that allows attacking unsuspended Digimons, the new Metalgreymon has suddenly made the old BT-02 Blackwargreymon very playable (which saw its price more than double on YYT and Bigweb).

And this is not discounting how good the new [BT8-070] Blackwargreymon is, as demonstrated in this proxy play by the File Island Residents. 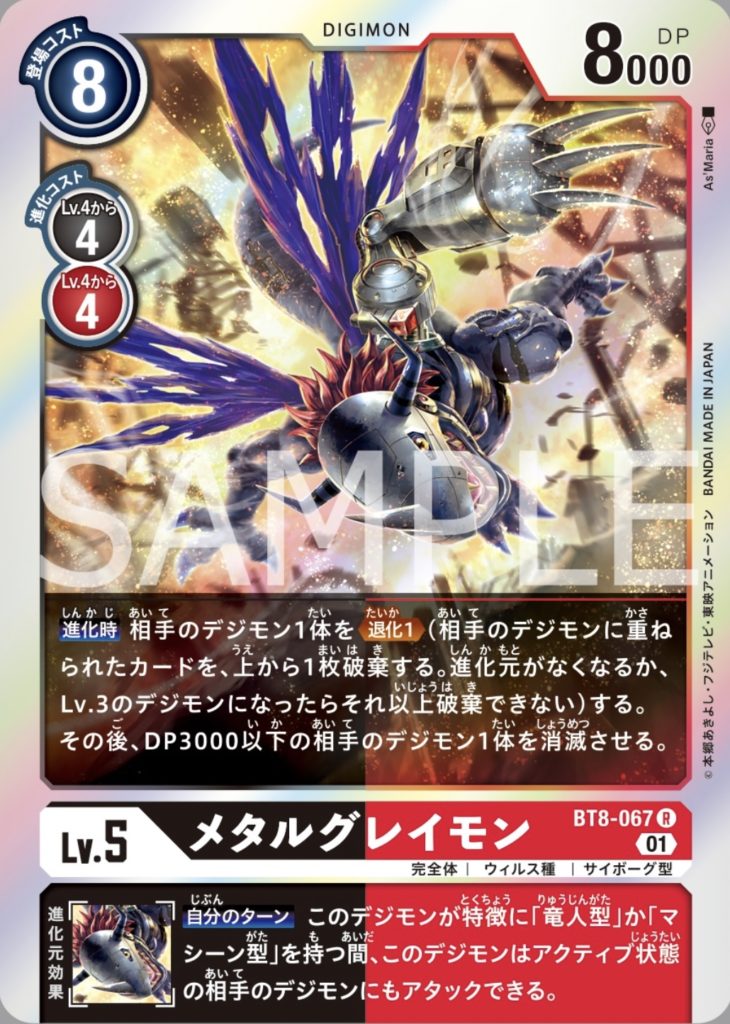 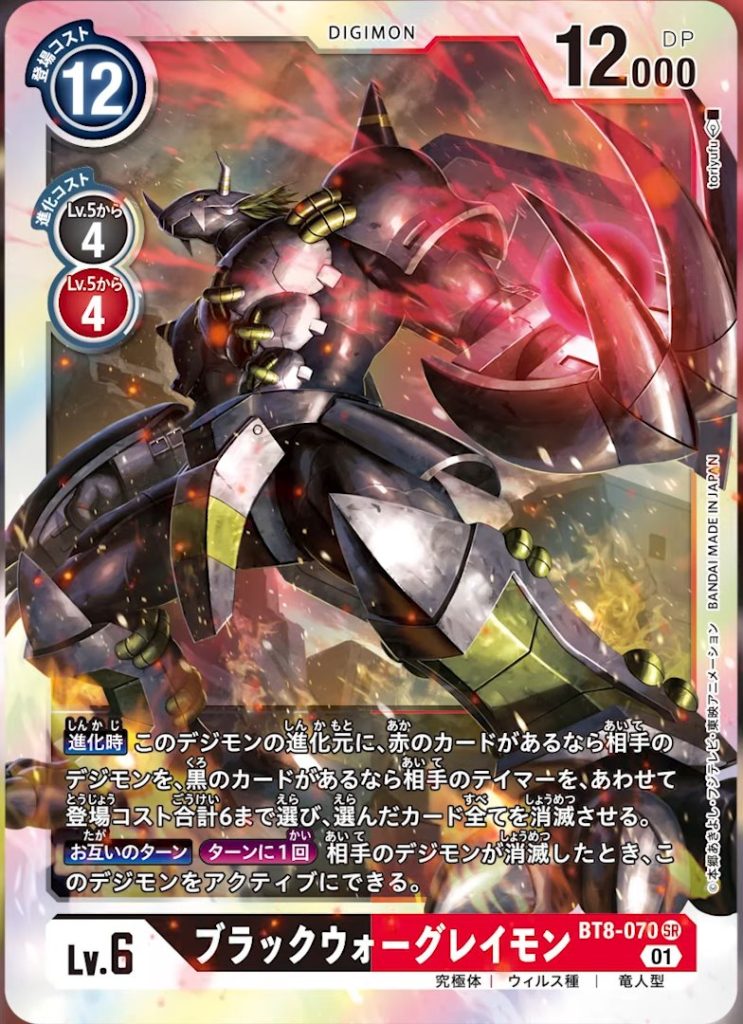 Very surprising was the additional support for the Mamemon line, given [BT8-065] Catchmamemon and [BT8-068] Banchomamemon. It is now possible to play the Mamemon archetype pretty much on it's own, and boy the engine does seem strong! We had written an article for Catchmamemon before Bandai revealed Banchomamemon, but you get the gist! 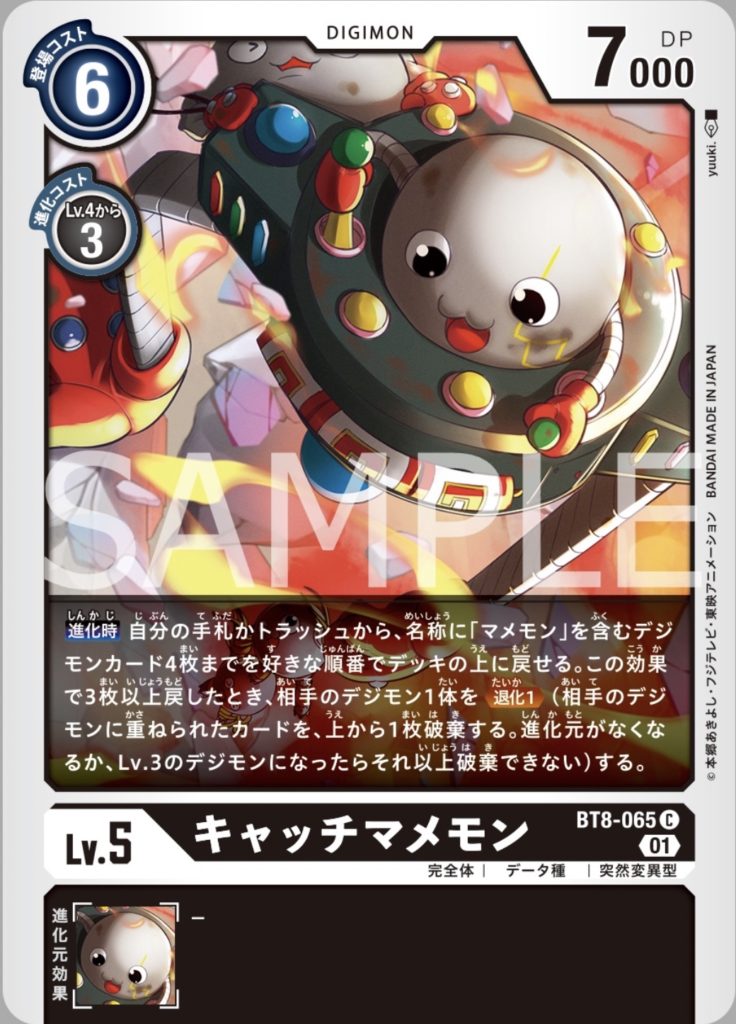 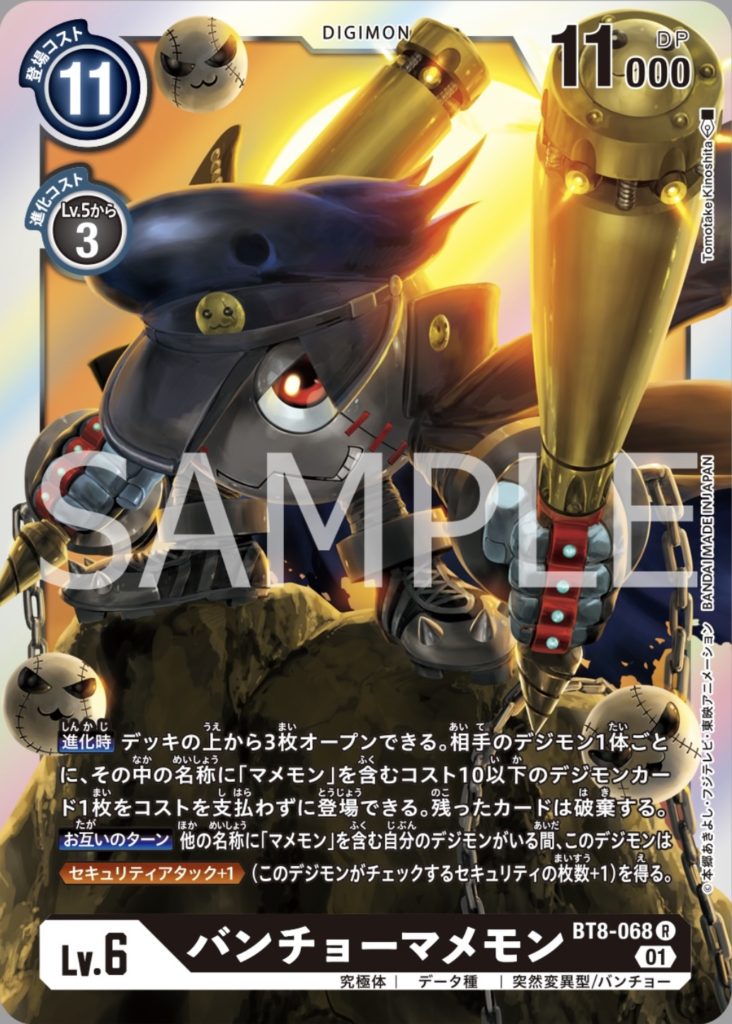 [BT8-065] CatchMamemon
Effect: [When Digivolving] Return up to 4 Digimon cards with [Mamemon] in their name from your hand or trash to the top of your deck in any order. If this effect returns 3 or more cards, 1 of your opponent’s Digimon gets [De-digivolve 1].
[BT8-068] Banchomamemon
Effect 1: [When Digivolving] Reveal the top 3 cards of your deck. For each of your opponent’s Digimon, you may play a card with [Mamemon] in their name and has a play cost of 10 or lower without paying its cost. Trash the remaining cards.
Effect 2: [Both Turns] When you have another Digimon with [Mamemon] in it’s name in play, this Digimon gets [SecurityAttack+1].

While in BT-07 we had the Dorumon-Dorugoramon line, that was more of an independent x-antibody line that did not require or support Alphamon. Fans of Alphamon will rejoice in BT-08, as Ouryumon has finally been revealed and will give Alphamon decks the much needed independence.

There is also a very high chance that we will see Alphamon Ouryuken Mode as a SEC in this set, and that is definitely very good news for this set! 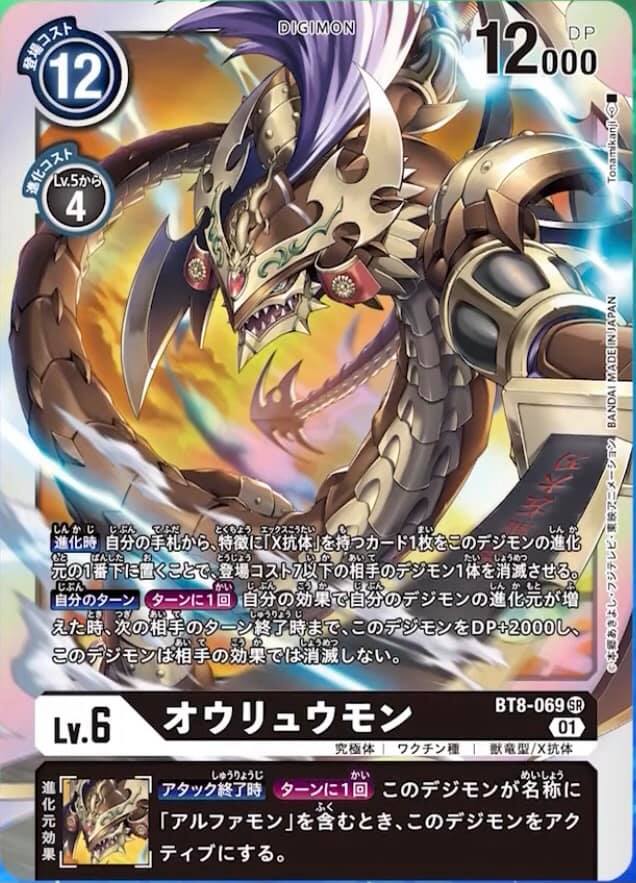 We wrote about Vamdemon/Myotismon support in EX-01, and then again recently for the upcoming Belialvamdemon/Malomyotismon. This is a tricky one, as some recent proxy gameplay videos show that even the new [BT8-083] Belialvamdemon struggle against an non-meta, older BT-03 Belialvamdemon build.

Vamdemon builds so far had been pretty unsuccessful, blaming on a very slow start and very situational late game advantages. We still believe that the new Belialvamdemon can find space in this meta, but someone will have to be more creative or further optimize it's current engine.

All 10 SRs have been revealed, but none of the SECs yet.

So far we would bet on 2 of these 3 cards being SEC: Alphamon Ouryuken Mode, Imperialdramon Paladin Mode, and Gulusgammamon.

Alphamon Ouryuken Mode (OM) would be the easy one, having Ouryumon revealed for this set. However, it is still possible for Alphamon OM to be saved for a later set given how Bandai likes to stagger fan favourites. Furthermore, Alphamon OM has almost nothing to do with the theme of this set (being New Hero) so let's not have our hopes too high.

Imperialdramon Paladin Mode (PM) is our second guess for SEC, based on the fact that this is a Digimon Adventure 02 themed booster, and there is no big protagonist cards yet other than [BT8-032] Imperialdramon Fighter Mode which was revealed very early for this set. There is also no LV7s yet for this set, so Imperialdramon PM could make a good, in-theme SEC.

Our third guess for SEC would be Gulusgammamon, as it would be quite weird for Gammamon to appear in the pack art, and then to have the only "Ghost Game" cards in this set being a Digitama, a LV3 Gammamon, a LV4 Betelgammamon common card, and his tamer Hiro. Gulusgammamon would make a good art, and does not interfere with Gammamon's digivolution line in the future.

Comparing this set to BT-07 Next Adventure, we'd think that this set "liberates" the card game.

Back in BT-07, Bandai has put so much emphasis on tamer and hybrid digivolutions that it had eventually powercrept almost every other standard decks. Aside from purple, every other winning deck were almost certainly built around tamers and hybrids. The card game had suddenly felt restrictive, with almost only a way or two to play any deck.

In BT-08, the focus once again shifts away from hybrids, and with multi-colored Digimons the door to creative freedom is larger than ever. However liberating this may feel, there is a always some chance that a dominating engine could appear to steer and restrict the meta once again, but at least this is Bandai's first step to open up colour restrictions and hopefully drive creativity back into the game.

Final score: 8/10 (with a refreshing feel to the card game)