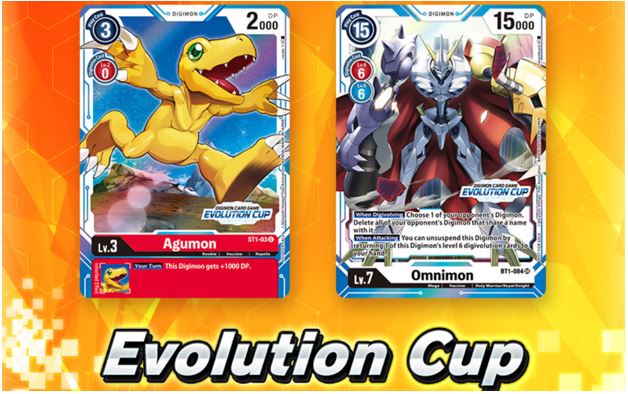 Lilithmon loop is a deck that feels like no other to play.

In all honesty I had no plans to play it before the event. I had not touched the deck in a few weeks and had been testing other decks. It was past midnight and the event started at 8am. I had not yet submitted a decklist and being too lazy to lay out all the cards for another deck and take a new picture, I checked my regional deck list and the photo for some reason did not have a date on it. How convenient! So after submitting the same Lilith Mon deck I played for regionals, it was time to rest up no?.

It turns out that was not the case, after doing practically anything but sleeping, I managed to fall asleep at around 5.30am. Surely two hours was enough rest for a long 8-9 hour event. After waking up at 7.30am, making a cup of tea and sitting at my desk, it was time to play. With 2 hours sleep and playing what is in my opinion the most difficult deck to play optimally, this was bound to be a disaster was it not? It turns out it was anything but that. 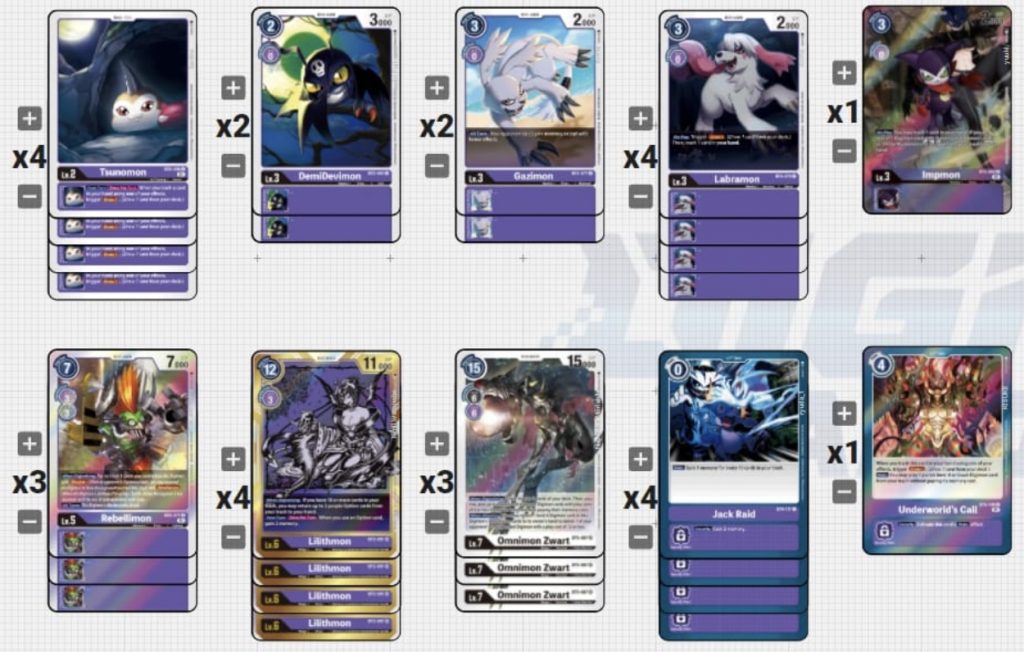 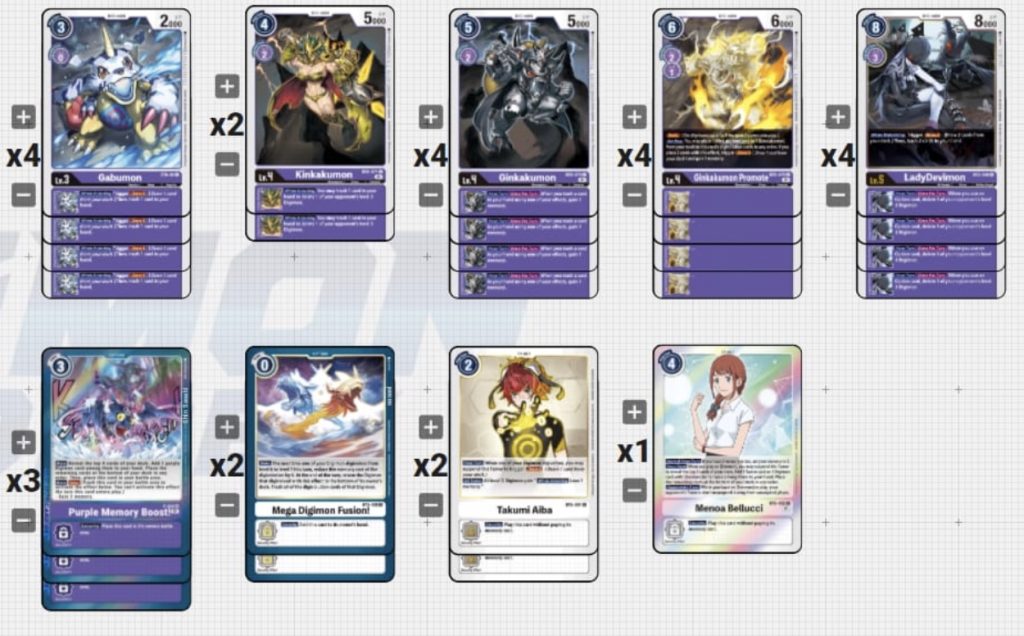 I'm opting to use Tsunomon over Demimeramon due to the ability to utilise it multiple times over many turns and to prevent the need to have to attack security in the hopes that my digimon dies and I can draw a card. It's not often a good idea to attack security early, with the amount of tamers prevalent in this format, hitting a Davis or Matt against Gabubond or a Tai against Jesmon on the first check is often game over there alone due to them getting a free tamer without the loss of tempo. 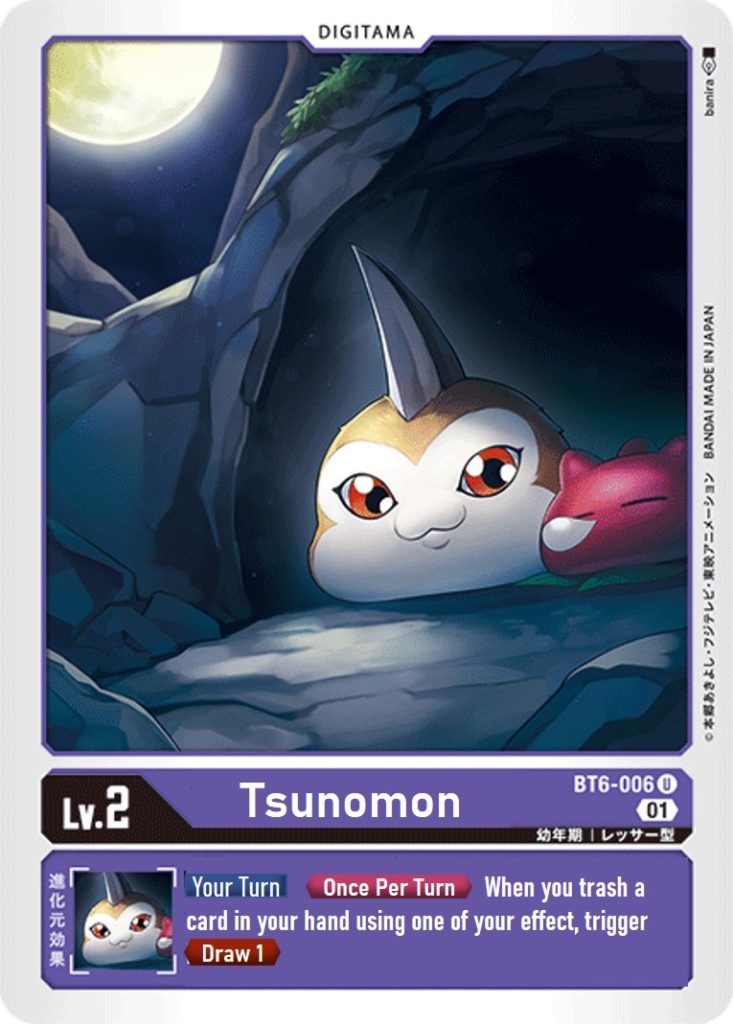 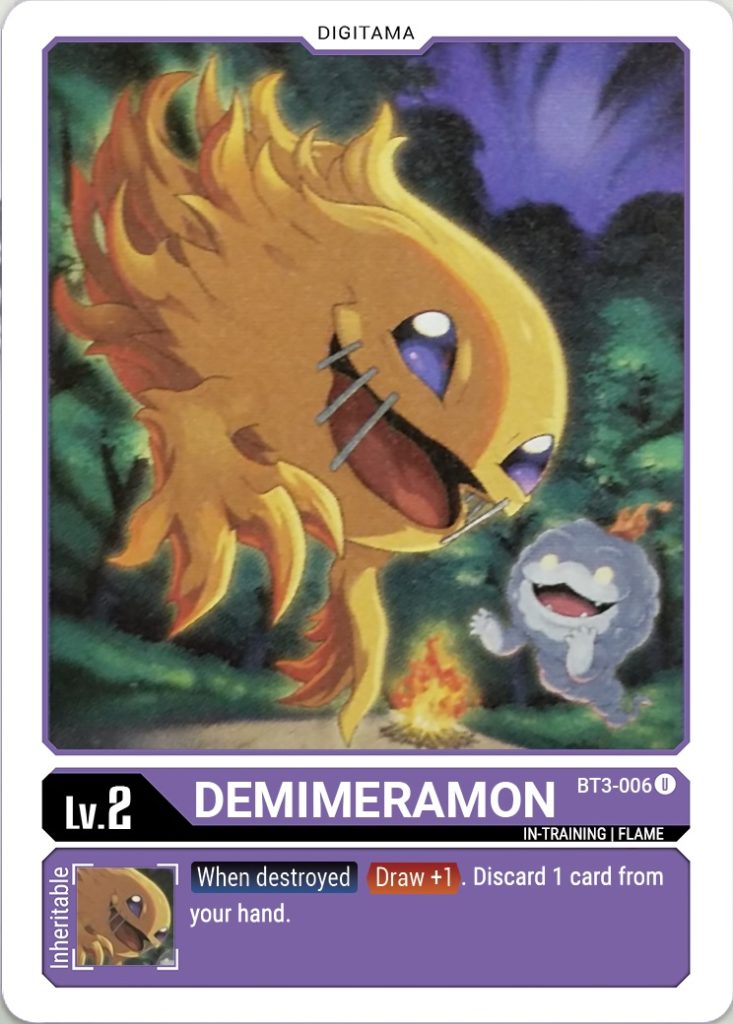 Level 4 Blockers feel rather useless this format outside of Mekanorimon. With the addition of 7k Level 4's, they no longer even trade with them and the one cost blockers also don't trade with the 6k Vanillas. In this deck particularly, sometimes it is a good thing for your opponent to attack you early as it can help add some extra cards into your trash for your Jack Raids to become live. We are using Rebellimon as our only source of blocker and I will later explain where it comes up in matchups.

I've seen numerous Lilithmon lists running the new Wizardmon promo over Ginkakumon. In my opinion I don't really agree with this, we can utilise Ginkakumon better early game by evolving into Ladydevimon and Rebellimon for 2 cost and choking the opponent that way. We can also utilise it better than Wizardmon late game by adding them under the Ginkakumon Promotes that we play off of Zwart.

When you add both of the Ginkakumon Promote components under it, you gain a memory and draw a card, then when you attack with Promote you can use Kinkakumon's inherit to trash a card gaining another memory from Ginkakumon's inherit. If you brought back 2 Promotes, it is likely to gain 3 memories if not 4 through the full engine alone and that is outside of the Jack Raids recycled off of Lilithmon. This provides so much extension and turns that feel like they won’t end until our opponent is defeated, or we build such a large board that they cannot combat. 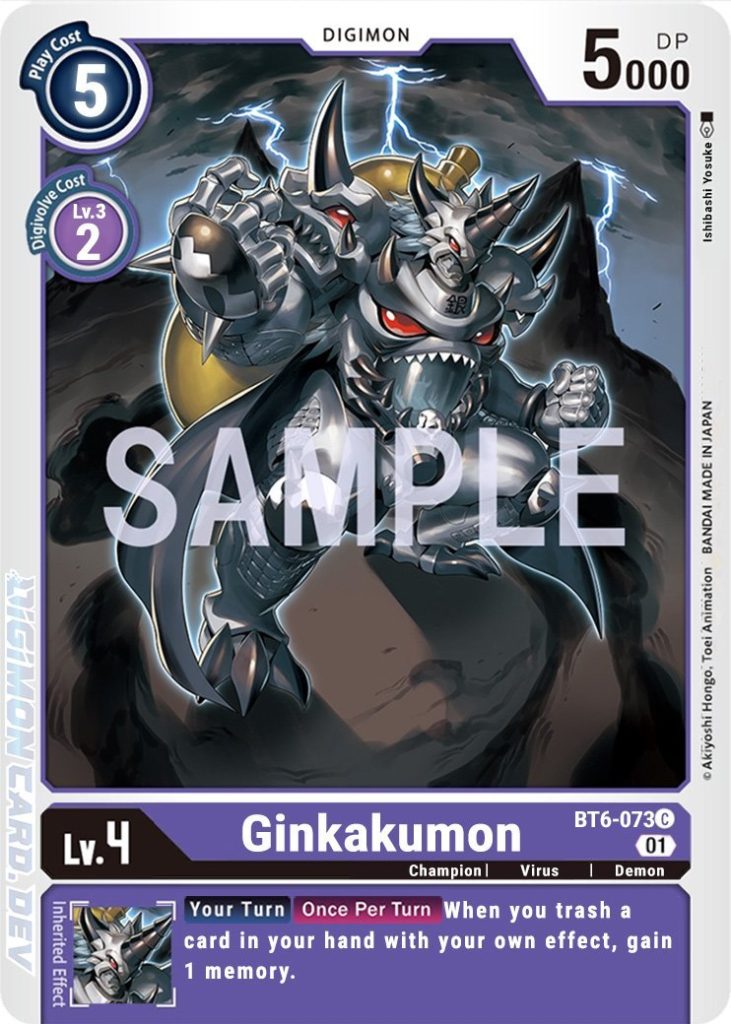 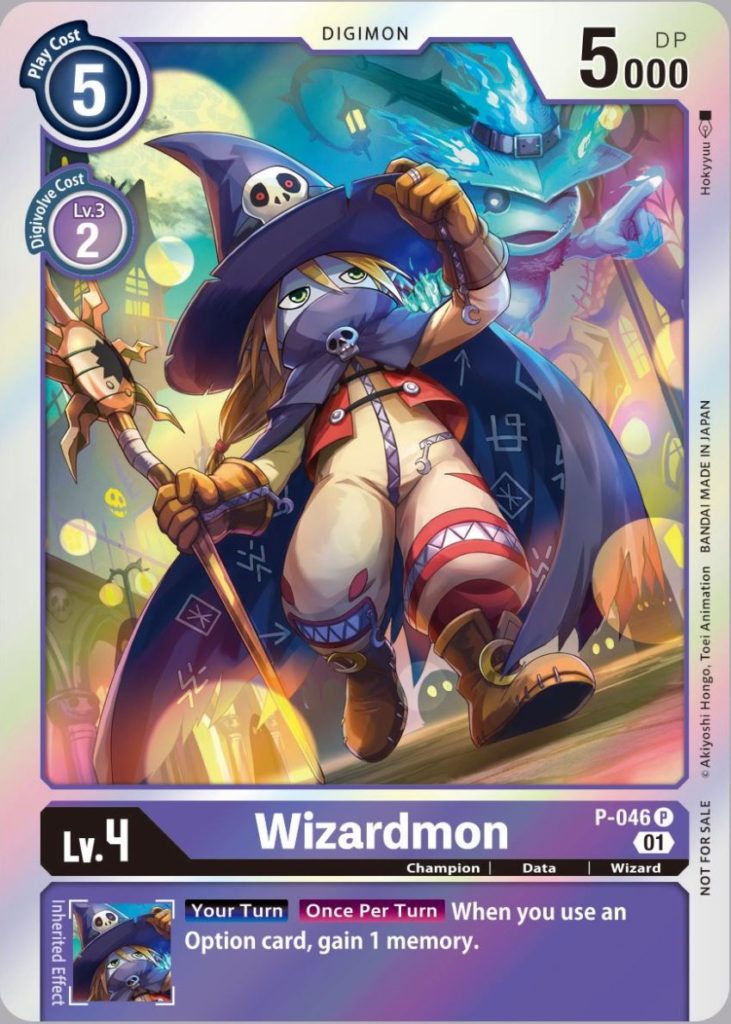 In all honestly this matchup is not too difficult, the deck lacks ways of removal and is more of a stun deck. Ladydevimon and Lilithmon can just sit on the board until you have the pieces you need to start the loop and end the game from there.

On paper not a good matchup, our security is often terrible outside of Jack Raid and even then, the deck has access to a delicate plan to turn that off. Jesmon also has too much DP that it won't die to Zwart either. Rebellimon is the MVP in this matchup, with the ability to gain retaliation and blocker, it can wall off attacks from Jesmon for a turn. That turn is often enough to then make Lilithmon plays the following turn.

The high Rebellimon count we play in combination with the numerous sources of card draw the deck has often allows us to evolve to Rebellimon to stall that extra turn, and then end our Lilithmon loop turn by evolving into another Rebellimon in the case we don't kill our Jesmon opponent in order to prevent them from doing anything on the return and simply finish them with the big board we've made on our next turn.

Possibly the strongest overall deck of the format, Gabubond is an interesting matchup to play against. Out of the three variants, I'd say Lilithmon performs worse against the AncientGarurumon variant due to its ability to end games even faster when it high rolls it's draws. Thankfully, that version seems to be dying out and more people seem to be preferring the rookie rush variant or the variant with the red options cards for the security control matchup.

This round was against the rookie rush variant, Takumi can help in this matchup to deter early aggression from the Gabumons being hard played. The general strategy to beat Gabubond is to turbo up into a Lilithmon as fast as possible with a Ladydevimon underneath it. Outside of Cocytus Breath, the deck has no answers for level 6 digimon. Through the extra memory we will gain off of Lilithmon each turn and the ability of Ladydevimon to pick off any level 3's played; we can gain enough advantage in order for us to win out through a loop turn.

Like Jesmon, normal blockers are rather useless in this matchup, Rebellimon however can once again put in some work. When ending our combo turns, should we have not won the game, with all the memory we gain from cycling jack raids, we can end our turn by evolving a level 4 we have into Rebellimon and then into Lilithmon, meaning she retains the blocker and retaliation and can wall off the Bond of Friendship for a turn which is usually enough for us to end the game through the board advantage we have gained.

An interesting deck combination, the aggression of blue with the board control of yellow. Spiral Masquerade is as good a card as ever, removing our Ladydevimons can be rather troublesome. Takumi was the MVP in this matchup, thankfully I saw him early which really slowed down the aggression my opponent could put out and buy me enough time to get my strategy online and take the win.

A rather popular deck particularly in large tournaments such as this, whilst often an annoying and frustrating matchup to play against for most decks, we can take this one rather easily. The deck gives us so much memory that we can filter through our deck at a rapid pace, adding to this, we don't run out of steam as we are pulling our Ginkakumon Promotes and Ladydevimon from the trash in order to deal our damage and build our board.

Hard evolving into Omnimon Zwart can be a great way to end a turn and build a board large enough that our opponent cannot deal with it. Ladydevimon having a play cost of 8 is extremely important against the common Beelstar versions of security control as there is no easy way for them to clear an Omnimon Zwart, Ladydevimon and another body, requiring 3 cards to do so. In the first game I messed up and decked myself out which was rather embarrassing, but games 2 and 3 we made up for that and took the win.

Against the winner of the tournament overall, although a close match I feel like I threw the game. Forgetting about the Rizegreymon + Baohuckmon interaction to kill my Rebellimon. Though the biggest misplay I made was evolving a Ladydevimon onto a Ginkakumon instead of a Kinkakumon on a turn I could have potentially won. I hit a judgment of the blade in security that gave him a blocker through playing Sistermon Blanc, meaning I couldn't use Kinkakumon's inherit to kill the blocker as I had already used up my memory for the turn.

Against the 2nd place player of the tournament, as stated previously, this matchup is pretty free for us, we can build boards that they cannot clear and never run out of steam due to our reliance on the trash. We have no fear of being killed quickly if we don't hit a defeat early of security and can just build an unanswerable boardstate and kill them through our Ginkakumon Promotes rush and recycling Underworlds Call to play them one at a time to which they cannot be killed off by options in security.

I was incredibly impressed with the decks performance, I felt like I could have won the whole thing if not for the misplays I made in round 7. Whilst it might not be the best deck overall, it has good or even matchups against the majority of the field. In a format where I feel matchups are rather important and some can be an auto loss for certain decks, having a deck that I felt confident could beat anything I came against if I play well enough is a good reason to want to play this deck. Adding onto that, when playing this deck, every little decision matters and can be game winning or game losing, which makes it feels very rewarding to play.

There isn't much that I would want to change about the deck, there is potential to add in a blocker + Skullgreymon synergy instead of Rebellimon or change the rookie line-up a little by adding in a couple of Tsukaimon in place of some Labramon to help to get extra memory against decks that have lots of removal.

Thank you for reading my tournament report and have some fun with your 10-minute turns! 🙂