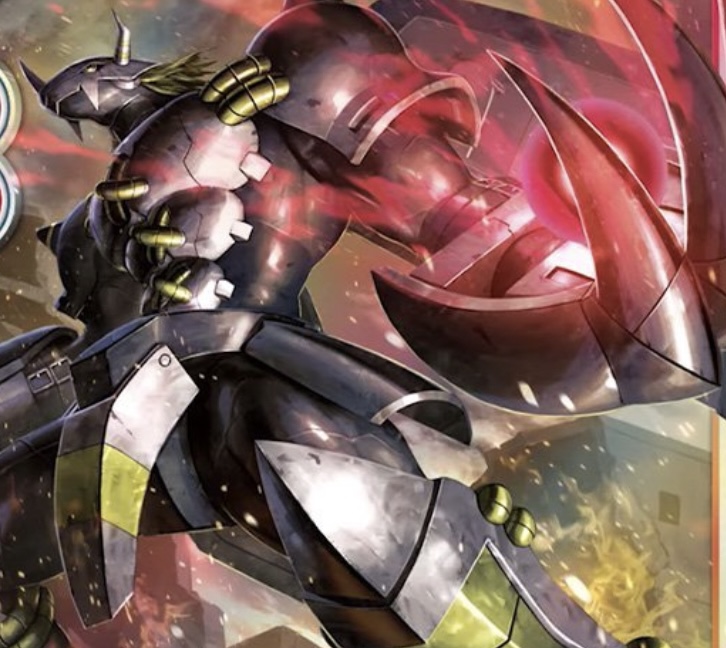 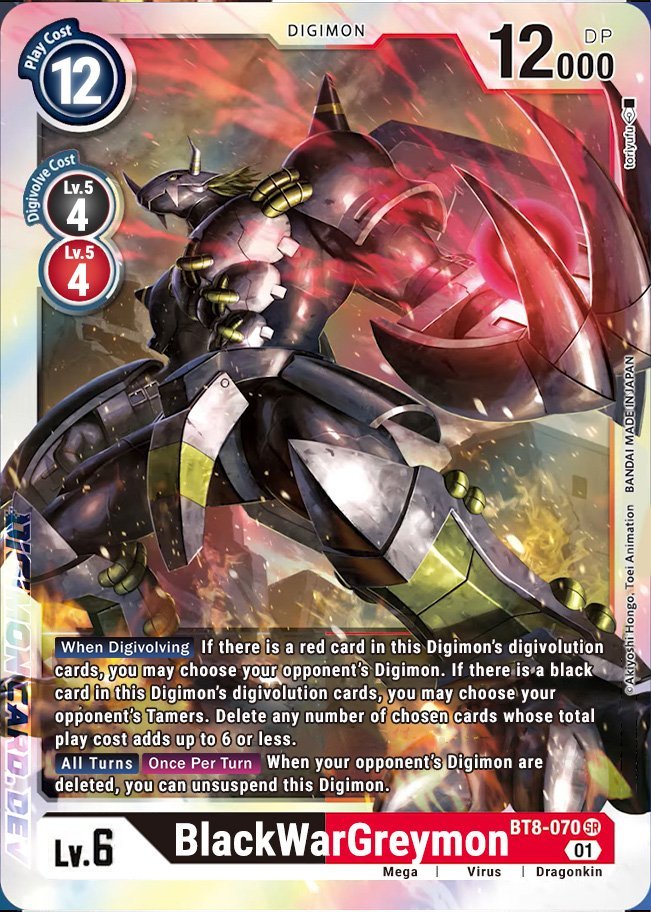 Blackwargreymon was a hot topic during the time this card is revealed. People felt excited not only because they like Blackwargreymon from the anime, but also Bandai has given a totally new mechanic for his deck.

Looking at the current BT8 meta where Imperialdramon and Mastemon are dominating the tournament, Blackwargreymon only can make it to Tier-2 in BT8 format.

Playing Blackwargreymon deck is like playing a Greymon Tribe deck. Things need to be setup for the big boss to appear, need to play more tamers to save the digivolution cost or gain more memory, option card is a must to delay or save the game in early phase. 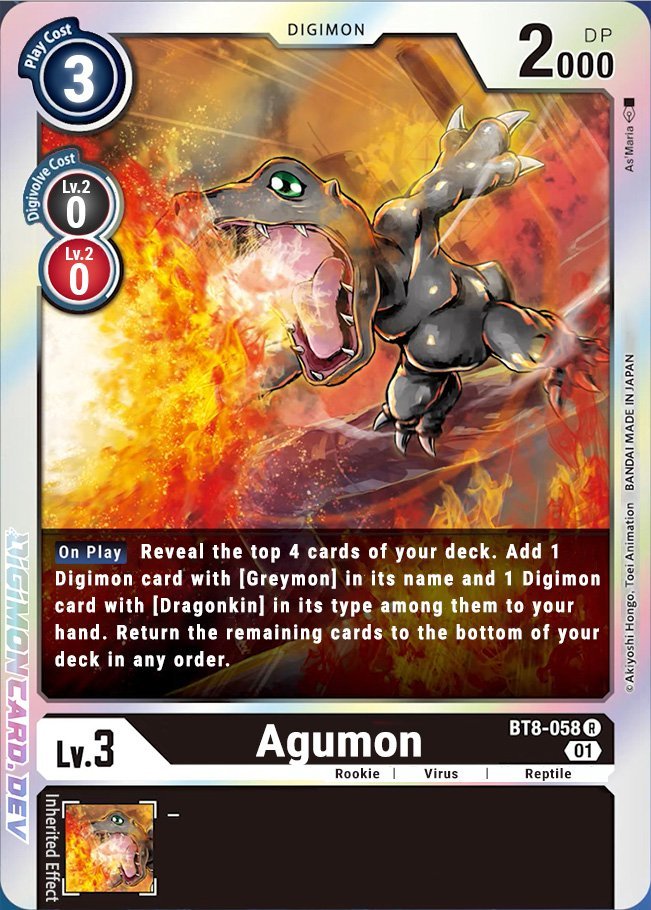 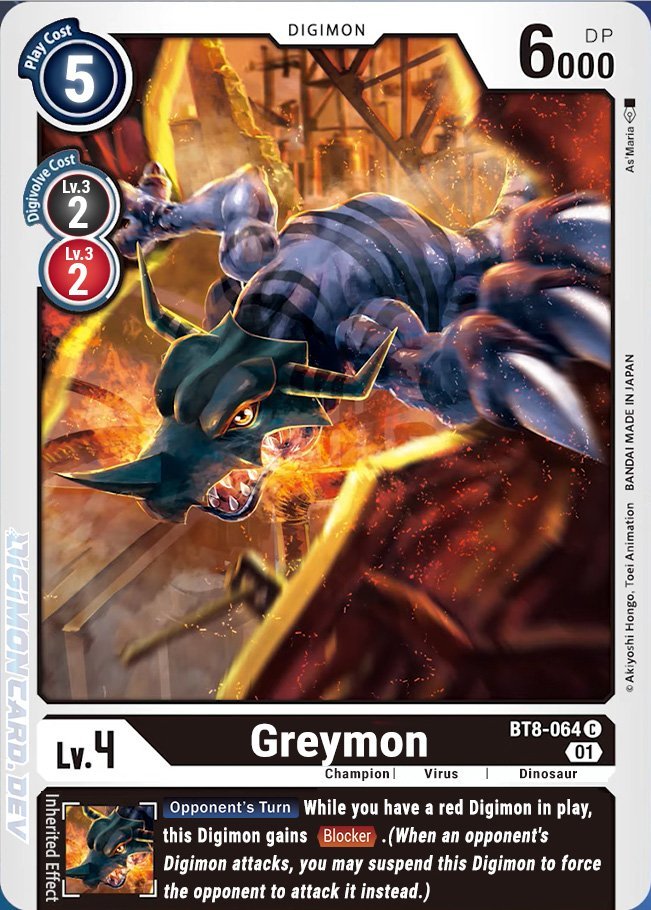 The [BT8-058] Agumon is the best for searching power, we can put to hand a LV6 Blackwargreymon and a Digimon with [Greymon] in its name (so both LV4 Greymon and LV5 MetalGreymon are qualified for the search). The Agumon can be free-played when we hard-play Nokia tamer for 3-costs, or you will just hard-play him for 3 cost as that is maybe the reset-memory in opponent's turn. 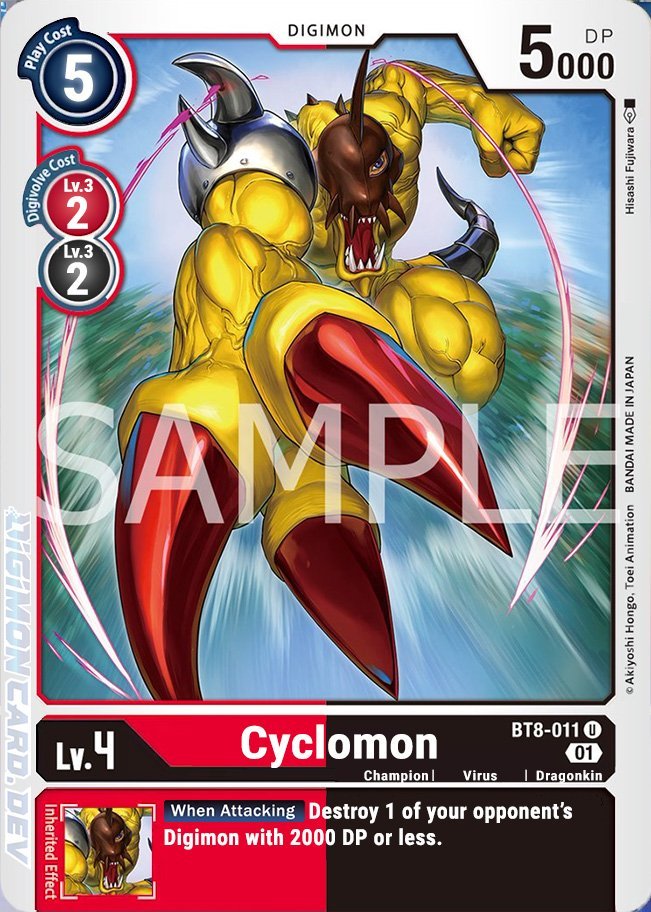 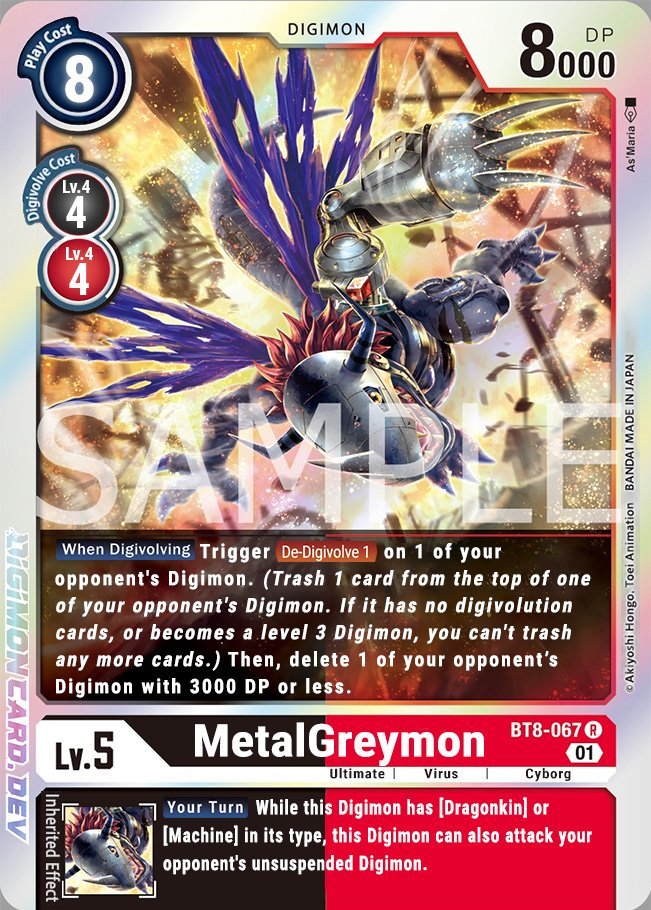 [BT8-011] Cyclomon is a LV4 black and red Digimon and a Dragonkin type. Even though it is not a Digimon with [Greymon] in its name, but it is a Dragonkin type that can be searched from BT8 Agumon, and this Digimon can be evolved from both black and red Agumon which is more flexible for the deck. On top of that, this Digimon's inheritable effect is to destroy 1 of opponent's Digimon with 2000 DP or less. It is a convenient way to destroy those annoying LV3 Digimon, such as Bokomon.

The [BT8-067] MetalGreymon, it would be better if it takes only 3 cost to digivolve into this Digimon like other LV5 Digimon, but no, it costs 4. At least it triggers "De-digivolve 1" on 1 opponent's Digimon, then delete 1 opponent's Digimon with 3000DP or less (sound good to deal with the armor release (Armor Purge)).

The most important role of Metalgreymon lands in his inheritable effect where he can grant Blackwargreymon the ability to attack the unsuspended Digimon. With the DP's boost from LV3 Agumon (ST7 Agumon and promo Agumon), Blackwargreymon can have 14000DP (without considering about which Digitama it has under its digivolution source). And again, if Blackwargreymon destroys an opponent's Digimon, he can be unsuspended once.

Blackwargreymon takes 4 costs to digivolve into, and he can delete 1 opponent's tamer and 1 opponent's Digimon as long as the play-cost of those cards add up to 6 (4-cost to play Tamer and 2-cost to play Digimon). But normally we are able to delete only 1 Tamer or 1 Lv4 or lower Digimon.

The important of Tamers and DarkGaiaForce.

Both Marcus Daimon and Nokia are important for the deck, the more tamers we play in early game, the more memory we can gain back later. But this is also the weakness of this deck. 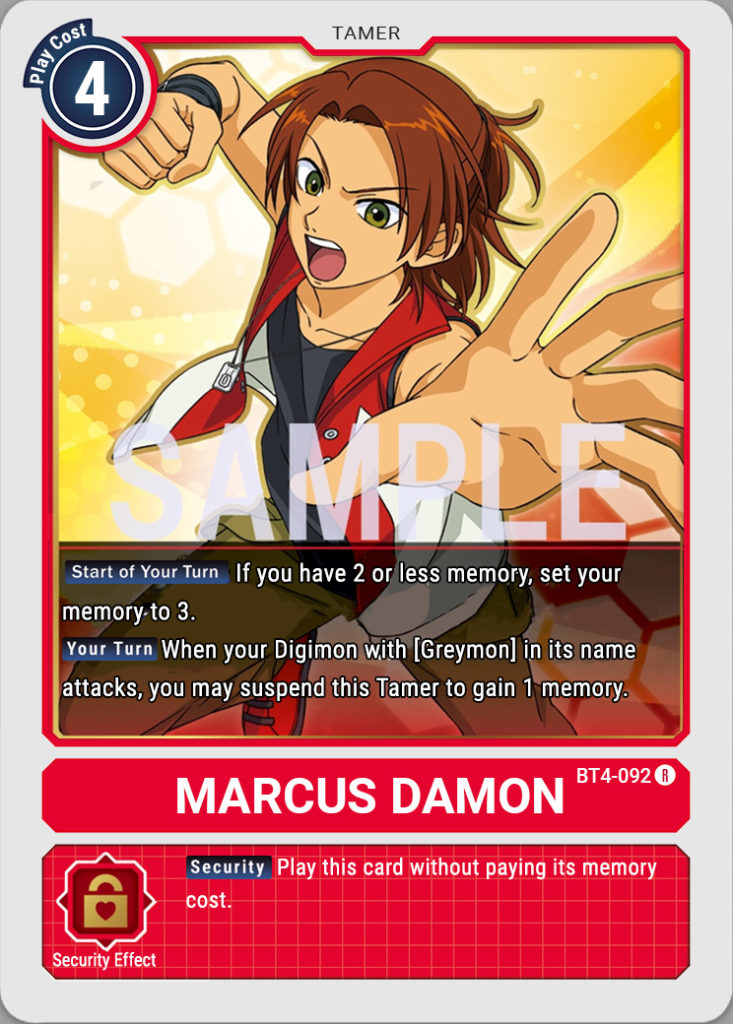 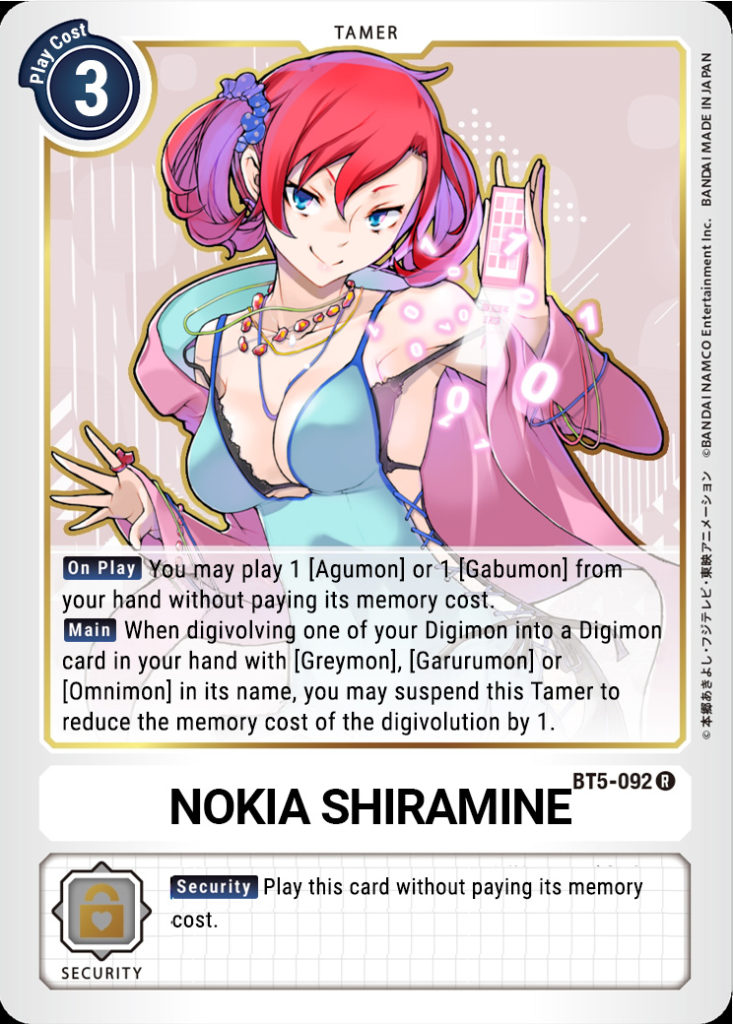 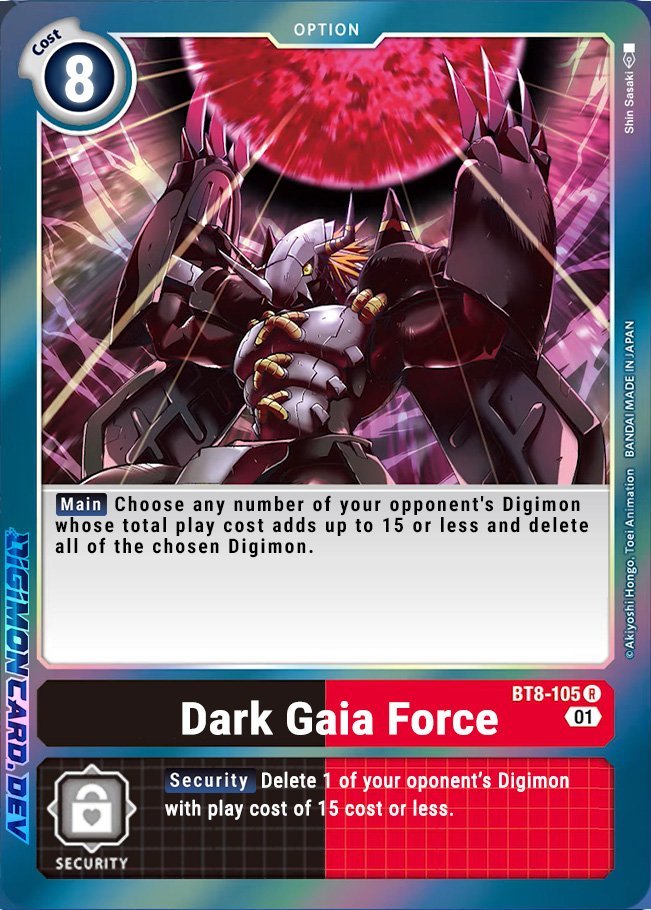 Dark Gaia Force is a very very important card of the deck. With 8-cost to play (equal to play cost of red Gaia Force), this card can destroy 2 opponent's LV5 or 1 LV6 or 1 LV7 Digimon or clear out all the rookies. Usually we should put more Dark Gaia Force in the deck hoping some of them stay in security stack.

The Weakness of the Deck

It takes too much time to set-up the digivolution source for Blackwargreymon while there are too many fast-pace decks in current meta. On top of that, we have to build the digivolution source inside the nursing area to keep it safe, beside, we need to play more tamers in early game in order to have enough memory to digivolve into Blackwargreymon while not passing our turn.

Once the Blackwargreymon appears in the battle area, it focuses too much on destroying opponent's Digimon instead of their security stack, so for sometimes we didn't recognise that the opponent has already finished our security LOLx.

In this case, consider using the EX1 Metalgreymon to grant Blackwargreymon "piercing" is the right way to optimise for the deck. With "piercing" and "security attack+1" from ST1 Greymon, maybe Blackwargreymon will have better chance. 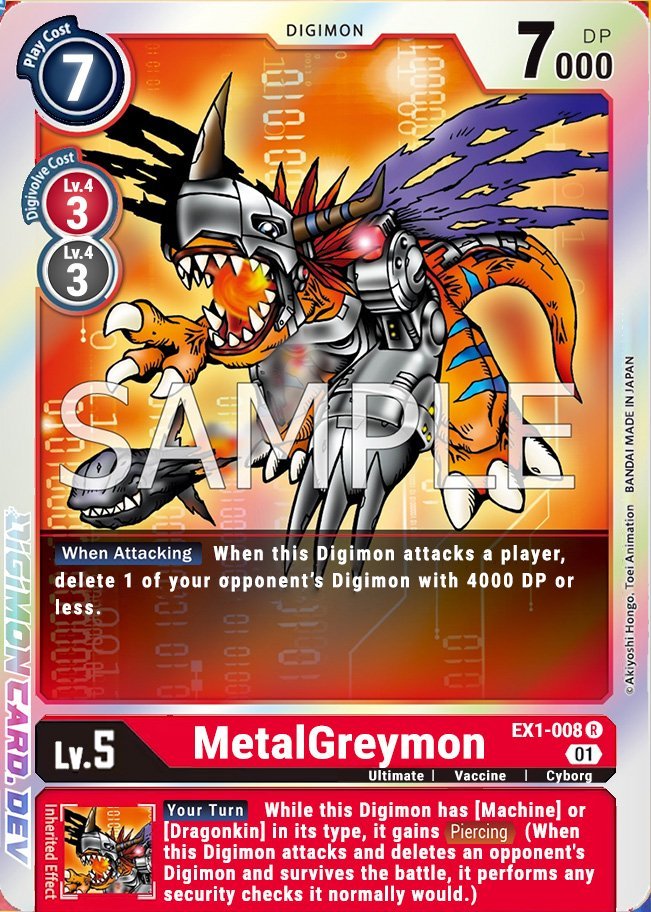