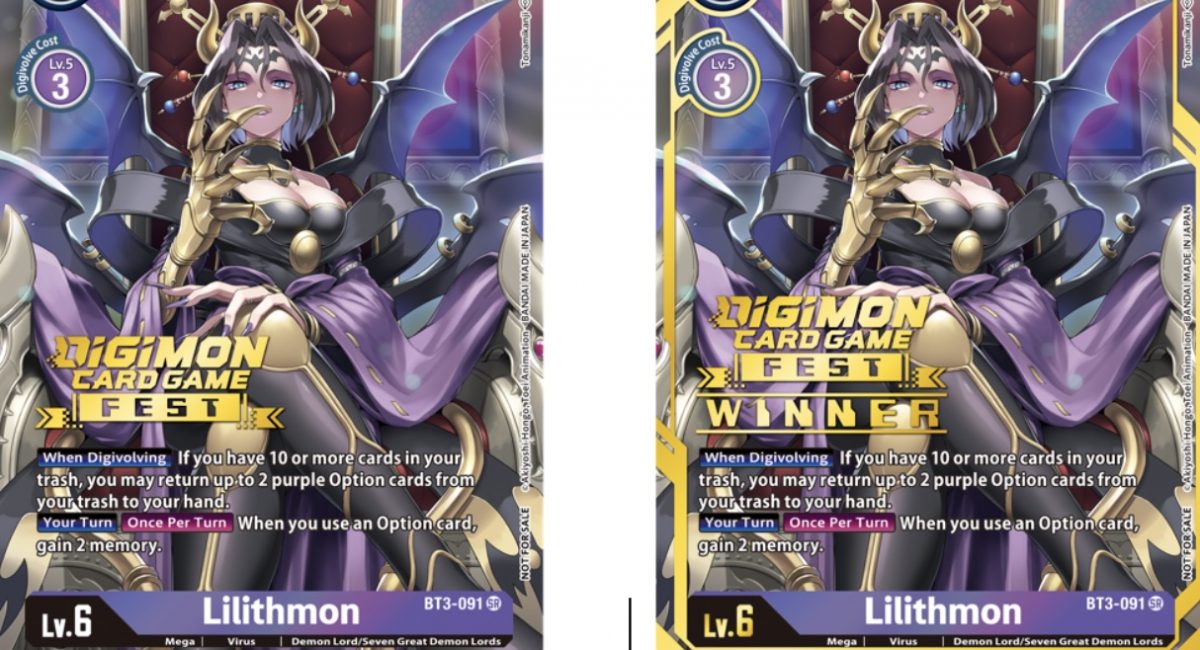 [Digimon Card Game Fest – Modified Rules]
Hello Digimon Tamers!
The Digimon Card Game Fest is a new event held in March 2022 to celebrate the Digimon Card Game with an exciting tournament and new exclusive Fest prizes!
Modified gameplay rules will be tested for the main event as follows. For Card Game Fest store events in Europe, please confirm with the store that the following rules will be used.
https://world.digimoncard.com/…/pdf/modified_rules.pdf
MULLIGAN
• After players have placed their security and drawn their starting hand, they may review their hand and mulligan.
• To mulligan, place all cards in your hand to the bottom of your deck.
• Do not shuffle, and do not replace your security cards.
• Draw five new cards from the top of your deck.
• Subsequent mulligans are not permitted.
SIDE DECKS
• Players will be permitted to bring their main deck of 50 cards and a side deck of up to 10 cards.
• Side decks may include main deck and Digi-Egg cards.
• The limit on copies of cards with the same card number that can be included applies to the total cards in your deck and side deck. If rules or effects change the limit on copies of cards that can be included, the limit applies to the total cards in both your deck and side deck.
• The contents of the side deck are considered a secret area and should not be shown to the opponent. Both players should count out their side decks in view of their opponent to confirm how many cards are in there at the start of each match. Your side deck may be returned to a deck box for safekeeping, which must be kept on the table in view of both players.
• After the end of each game in a match, players may choose to swap cards into their deck from their side deck. The same number of cards must be swapped between each deck. The quantity of both decks must remain the same before and after siding.
• Please keep the time between games to under three minutes. All preparation for the next game and exchanging of cards between main deck and side deck must be carried out within these three minutes.
• Players may be penalized if a judge determines them to be time wasting between games.
• Before the start of each game, if a player has a side deck, they should present it to their opponent face down. The number of cards in the side deck is public information, but a player is not required to reveal how many cards were swapped between decks.
• Players are not permitted to review their side deck contents during a game.
• At the end of the match, players must return their decks and side decks to their original states.
• If a player receives a Game Loss penalty prior to the start of the first game, players are not allowed to switch cards out from their side decks before the start of Game 2.
For more information on your region and which events are closest to you, please visit our website. We hope to see you at these events!
https://world.digimoncard.com/event/fest_2022/
Digimon Card Game Team

Here is the detail info, this post will be updated once Bandai release new news for the event.

[Digimon Card Game Fest Announcement]
Hello Digimon tamers! Today we are excited to announce a new event called Digimon Card Game Fest, held in March 2022 to celebrate the Digimon Card Game! Join this event for an exciting tournament and a chance to earn exclusive new Fest prizes! Today we’re showing off the card selections, which have a gold Card Fest stamp, and some new alternate artworks and backgrounds! There might be some never before seen BT7 and BT8 English cards too!
All supported regions will have a version of this event! We are making our best efforts to run some of these events safely in-person. Please understand that events are subject to cancellation, changes, or a switch to online due to COVID-19 considerations.
EVENT DETAILS
North America
Organizer: Play! TCG
Website: https://www.playtcg.gg/
Date: March 19-20
Venue: Esports Stadium Arlington, Arlington, TX
Capacity: 512
Registration Link: To be announced Friday, January 21
Organizer: PPG Events
Website: https://www.ppgeventmanagement.com/
Date: March 26-27
Venue: Miami Airport Convention Center (MACC), Miami, FL
Capacity: 512
Registration Link: To be announced Friday, January 21
—
Europe (UK, France, Italy, Spain, Germany, Netherlands)
To be organized by our distributing partners at a large-store level for mid-March. Online or offline event based on local COVID-19 considerations. Details to be announced.
—
Oceania
Organizer: TAK Games
Date: March 26-27
Capacity: 128
Location: Brisbane Convention & Entertainment Centre, Brisbane, Australia
Registration Link: To be announced Friday, January 21
—
Latin America
Organizer: Coqui
Date: March 19-20
Location: Online Event
Capacity: 512
Registration Link: To be announced
Organizer: Coqui
Date: March 26-27
Location: Chile (Under Consideration)
Venue: (Under Consideration)
Capacity: 256
Registration Link: To be announced
—
*For some events, the main tournament will run at the same time as another Card Game Fest tournament by Bandai in a separate room at the same venue. You may only register and participate in one tournament at the same venue. If competitors are found to register for both events, their registrations for both events will be cancelled.
Stay tuned for more prizing and registration info, and the new designs!
Digimon Card Game Team 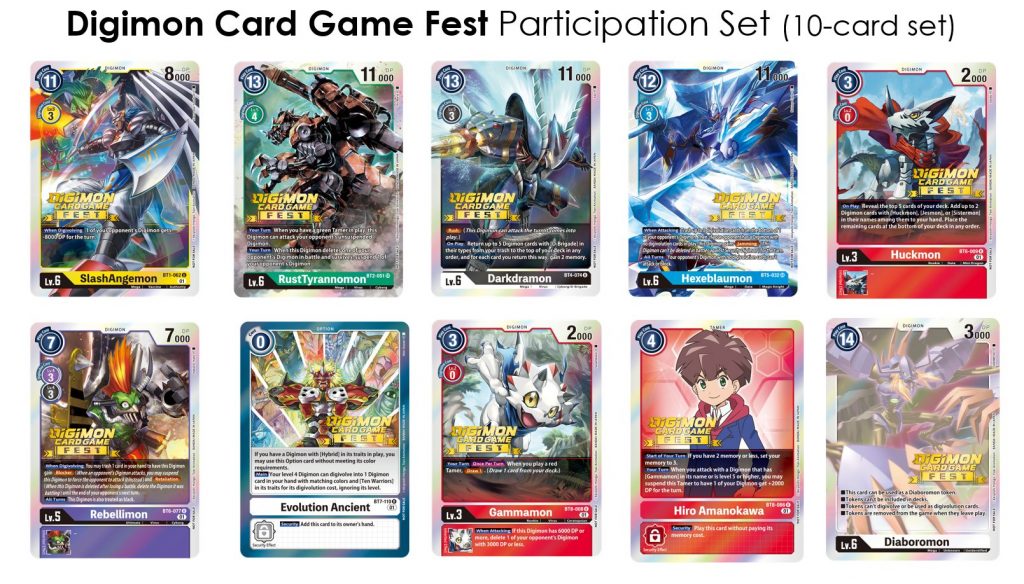 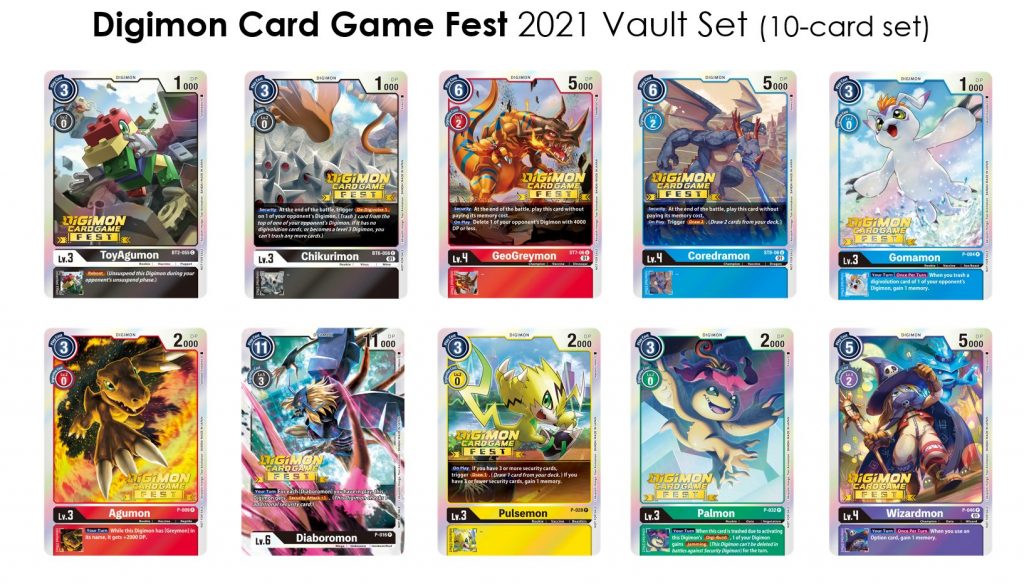 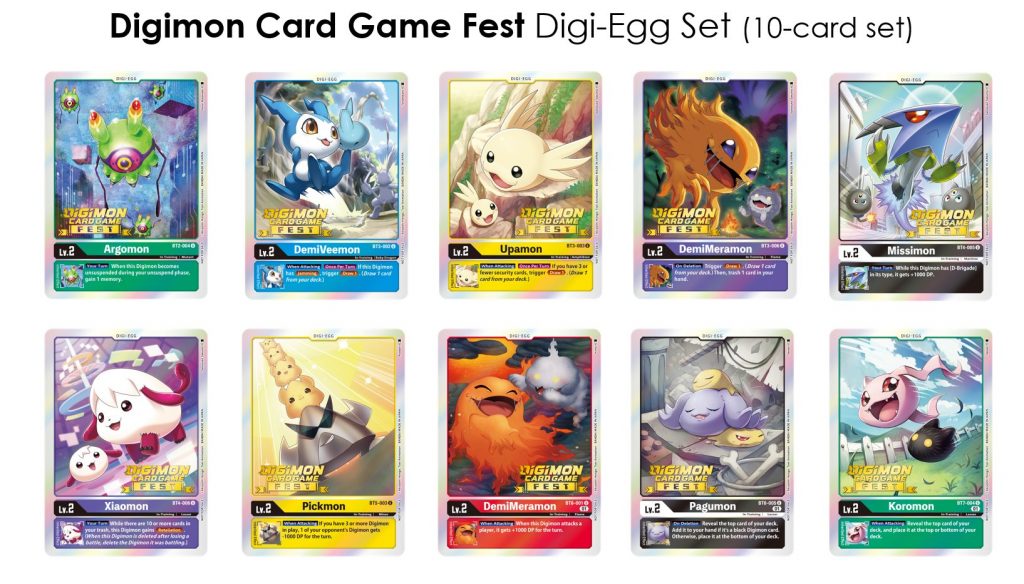