Why did I choose this deck?

After testing all the decks on the BT6 meta I came to the conclusion: “I don’t like any of the decks I’ve played on this format” and I thought, what if I play the ol’ reliable and I took my Lilith Loop from BT5 and updated it to BT6, getting a top 8 on the Evolution Cup and then winning the LatAm regionals with a huge different list, but still the same idea with Lilith Loop 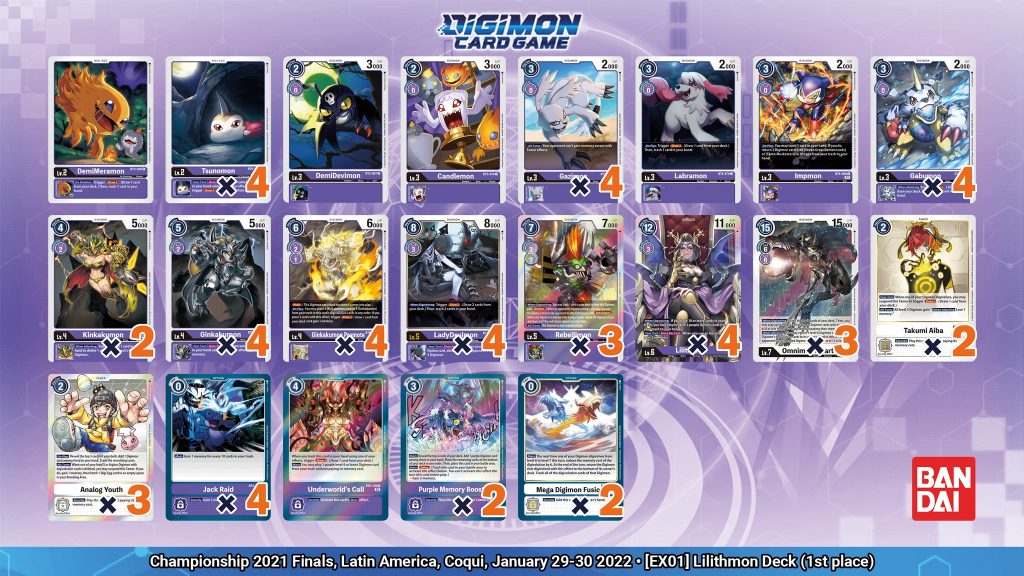 Why I’m playing Purple since BT5?

First, I started playing at the end of BT4 with the purple Structure Deck and I get started against a Security Control, and, as obvious, I lost several times but as a goal I said “I must win against that deck” and I get my playsets of LadyDevimon (BT3-088) and Metalgarurumon (P-027) and finally I get my first win doing 3 Nail Bone in a turn. And that was the start of a new TCG for me, a Yu-Gi-Oh player that was meeting Digimon TCG, and well, Lilith Loop is like playing Yu-Gi-Oh with the infinite combos that the deck can do.

Everyone knows what Lilith Loop does, but the main thing was to adapt the deck with EX1 with 1 day of testing it. Analog Youth was a pretty solid card that my deck must carry but I can’t get my favorite card on the game, Takumi Aiba (BT5-091), out of the deck because it was a counter against some Rookie Rush decks like GabuBond and Musketeer on their first turns. Also, the other doubt was Purple Memory Boost (P-040), and I had to adapt all my numbers of the deck.

Digitamas: 4 Tsunomon (BT6-006) and 1 DemiMeramon (BT3-006): As I’m running the Ginkakumon/Kinkakumon/KinkakuPromote version of the deck, I prefer to run 4 Tsunomon as my main Digi-Egg, and I added a 5th digitama (DemiMeramon) because I thought the games would be larger because Ice Wall! (EX1-068) was on the format.

Rookies: 4 Gabumon (ST6-03) because it was the best rookie to start with on a Ginka/Kinka/Promote build, 4 Gazimon (BT3-077) because it’s the memory locker and one of the best cards against the mirror match (or TitaLoop), GabuBond and even Security Control decks. The other 4 rookies are a mini-toolbox: 2 vanillas, DemiDevimon (BT2-067) and Candlemon (BT3-076) to get another Ginkakumon Promote hit by 4 memories; Labramon (BT4-079) to complete the Ginkakumon promote with Zwart or to trigger the Ginkakumon effect on the same opportunity (Ginkakumon effect to put Ginkakumon and Kinkakumon (+1 memory) and Labramon with a discard to trigger Ginkakumon (+1 memory)), and the last but not least, Impmon (BT6-068) to get back my Lilithmon when I get them on Security or I discarded them on a bad situation.

Ultimates: 3 Rebellimon (BT6-077) to stop Jesmon and GabuBond (evolving it on a Lilithmon on the same turn to don’t get it back to the deck with Bond) and 4 LadyDevimon (BT3-088) for the draw power and because it has synergy with Ginkakumon and Tsunomon

Options: 4 Jack Raid (BT4-111), 1 Underworld’s Call (BT6-108) to get the Ginkakumon Promote from the Trash without Zwart, 2 Purple Memory Boost! (P-040) because it helps to get a future vision of the bottom of the deck and can give me more memories on an Ice Wall! turn or against Security Control, and the best card on the game, Mega Digimon Fusion!, that absolutely deserves the ban.

Tamers: 3 Analog Youth (EX1-066) because it has an incredible synergy with my deck and Takumi Aiba (BT5-091) because it gets the draw power and the stall against Rookie Rush decks.

Maybe I would take out the DemiMeramon since the game is not so slow with Ice Wall!.

Your ideal turn 1 is to start with a rookie and a tamer to get a good start (Takumi for future draws and Analog to complete the evolution scale), also, you must worry about to get a great trash (ideally +20, but +10 is right), and you must worry about draw the cards of the loop (Mega Digimon Fusion!, Omnimon Zwart, Lilithmon, a level 5 on play, Jack Raid, etc.)

If you think you’re not going to win on the turn you loop, try to make a mini loop and wait for the Zwart you get on the bottom with Mega Digimon Fusion, or simply don’t loop and get free attacks with the promotes and save a Lv5 on the Breeding Area.

R1: Rookie Rush Yellow / Blue (2-0): I was too scared, with the power of Ice Wall! and Spiral Masquerade on the deck this match could be very hard, but it was not. Takumi Aiba saved me and the power of Kinkakumon and LadyDevimon was crucial to get out the rookies.

R2: AncientTroymon (0-2): Impossible matchup, he started with a perfect hand and I opened a bit bricked but with a playable hand. When he stated his AncientTroymon with some Terriermons on the table I think that was all for me, and it was.

R4: Imperialdramon (1-2): bricked on the 3 games, on the game 1 I opened without rookies, and I won; on the game 2 I never got the Lv4 and was impossible to play and in the game 3 I didn’t opened rookies again. I was very sad and I was marking my drop but my friends encouraged me to still playing.

R5: Jesmon (2-0): this was the Jesmon that did 3rd place on the DC-1 Grand Prix, Ciro Delgado, and he’s a solid player, but even with his Emergency Program Shutdown he got the game.

R6: Three Musketeer (2-0): I don’t remember this match too much, I was tired on this moment and I wanted to sleep haha.

R7: Agumon Bond of Courage (2-0): I get on the situation that my opponent has 2 memorys, a Tamer and I had 0 securities, and well, the luck was on my side and he didn’t had the Hybrid, then, I looped until I won.

R8: Security Control (2-1): I had this match very studied, as one of my pals is playing this deck since BT4 (the one that beated me every time when I had my Venomous Violet deck), and I get the game. On the 1st game, he got as his last security a Wyvern’s Breath and he get the deckout with that, and the second and third game was very favorable to me.

R9: Gabumon Bond of Friendship (2-0): Rebellimon was crucial, get the anti-Ice Wall combo (Lilithmon With Blocker and Retaliation) and I won both games.

R10: Jesmon (2-1): I was too hyped with the idea of doing a Top 32 and I don’t remember too much this match, i only remember that in one game I started with a Ginkakumon Promote on play.

TOP 32: Security Control (2-0): It was Francisco Huentecura, previous Evo Cup Winner, and I get a bit nervous, but with the loop on my side is hard to lose against Security Control, so, I won the match.

TOP 16: Titamon Lilithmon Loop (2-1): I didn’t expect this on top, and I was very proud of see another Lilith on top, it was the Gazimon war, on the game one I lose because he stablished 2 Gazimon and Titamon combo, and in game 2 and 3 I get the Gazimons. The Game 3 was a good meme, both players bricked hard, but I get the Analog x2 to get a rookie and a champion

TOP 8: Agumon Bond of Courage (2-0): Mr. Polako, a great player, very hyped because we get the top 8, I opened with perfect hands on both games, so I get the win.

TOP 4: Jesmon (2-0): The first game was hard, he get the Jesmon with Delicate Plan but he didn’t win; and in the second game I stalled with Rebellimon and then get the loop, being a very easy game compared with the first one.

Finals: Security control (2-0): I misplayed a lot (forgetting effects like Analog Youth and Lilithmon (+2 memory)), but the matchup was very favorable for me, because Security Control has several problems against Lilith Loop. I think I used Underworld’s Call like 3 times on a turn on the last game, and I get the Championship attacking with my loyal Gazimon.

This was a good way to say goodbye to Mega Digimon Fusion!, the most ridiculous card of the game. I loved to play Lilithmon Loop on BT6/EX1 format and well, I can try to get it alive again with cards like Win Rate 60% and with a blue version with the one Ice Wall! and 4 Hammer Sparks, but I must test all the meta as I did on BT6.

Thanks to all the people that supported me on all the rounds! Now I have to prepare me for the World Championship, I’m Cheems with that now