We were a bit late doing this BT-10 review, having all the cards from this set fully revealed a couple of days ago. Nevertheless, this should allow us to take a more holistic look at this set so lets get into it!

Xros wars comes to the DCG

Digimon Xros Wars (or Digimon Fusion in EN dub) introduced us to Kudou Taiki (or Mikey Kudo in EN dub) and Shoutmon back in 2010. In the anime adaptation, there were 4 factions led by different generals: Taiki's Xros Heart, Kiriha's Blue Flare, Nene's Twilight, and Yuu's Bagra Army. These factions has now been properly introduced in BT-10.

Before diving into the cards, let us quickly recap some new effects that were introduced in this set.

The general idea of the [DigiXros] system is to play Digimons instead of taking the usual digivolution route. Rookie Digimons can be played for their [On Play] effects, and then swinging at your opponent aka rookie-rush style. When they are deleted, they can use [Safe] to return to your tamer, to be later relaunched as a [DigiXros] Digimon. 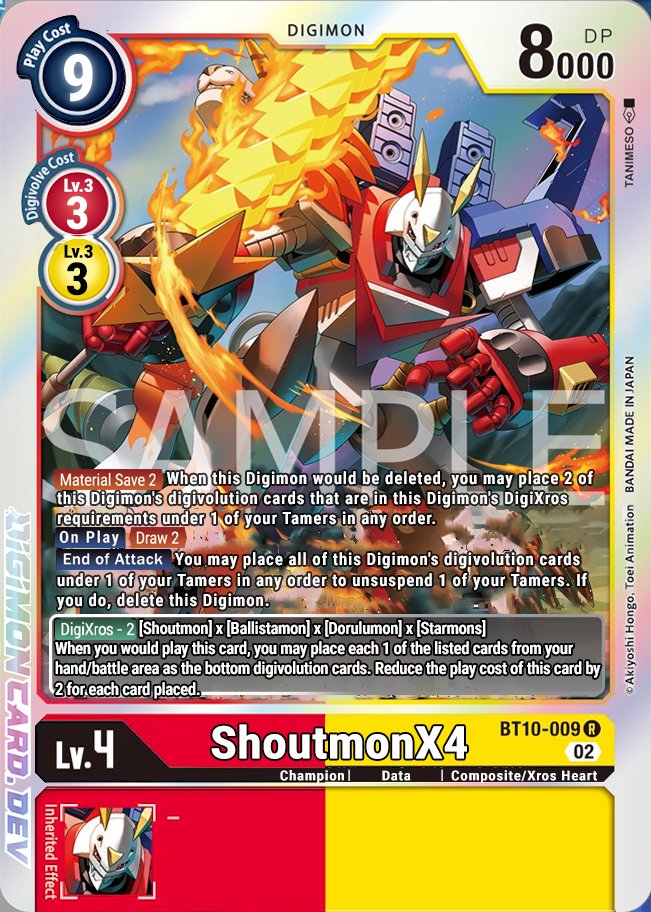 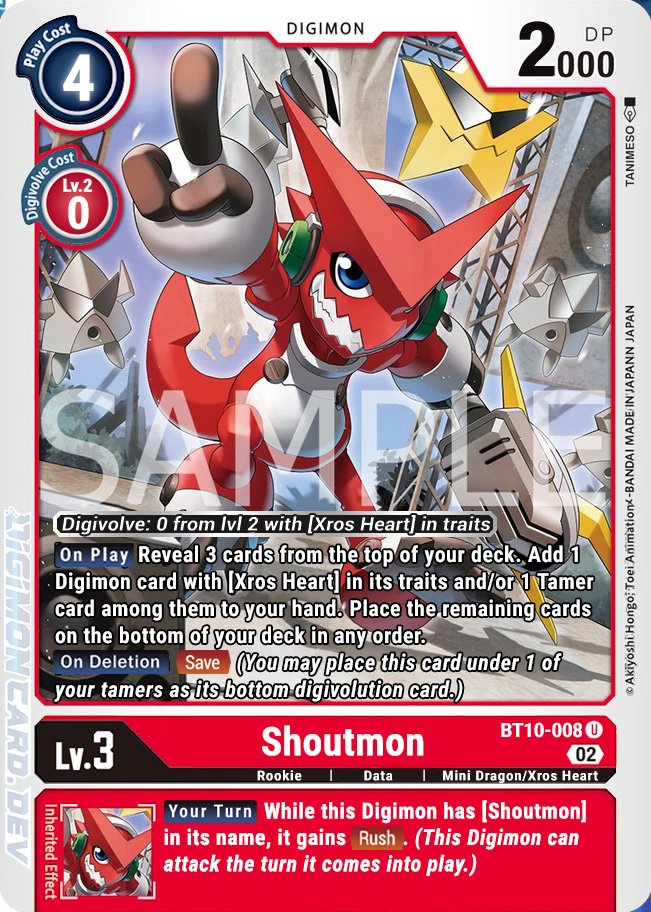 [BT10-087] Kudou Taiki and his [Xros Heart] crew would fully embody the [DigiXros] system, taking advantage of the different affinities of his Digimons (across different colors) to launch Shoutmon X4, Shoutmon X4B, Shoutmon X5, and Shoutmon X5B. Taiki is a natural strategist in the anime, and this has been made evident in the card game as his deck's playstyle may be the most complex among the other factions. 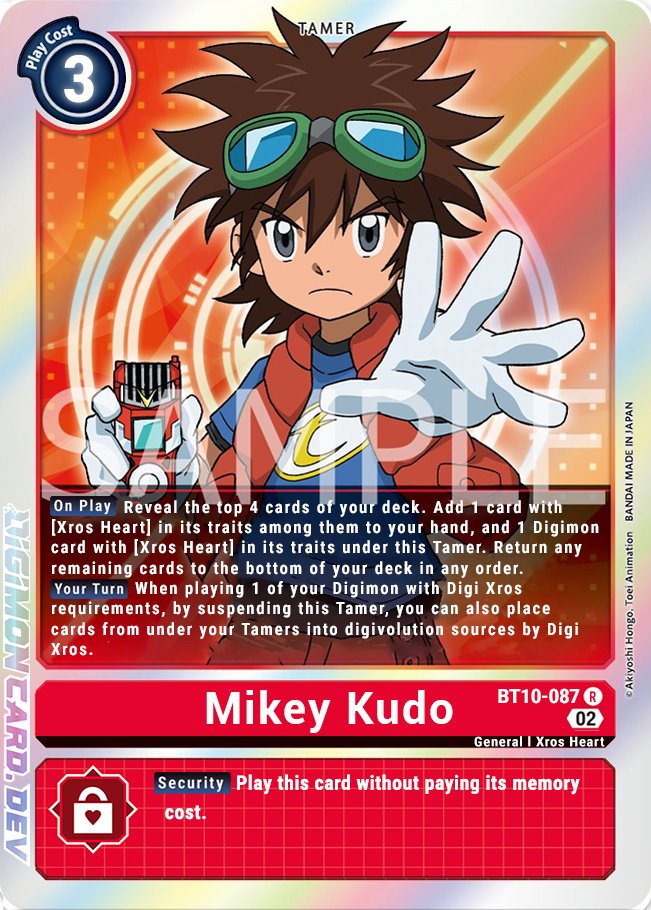 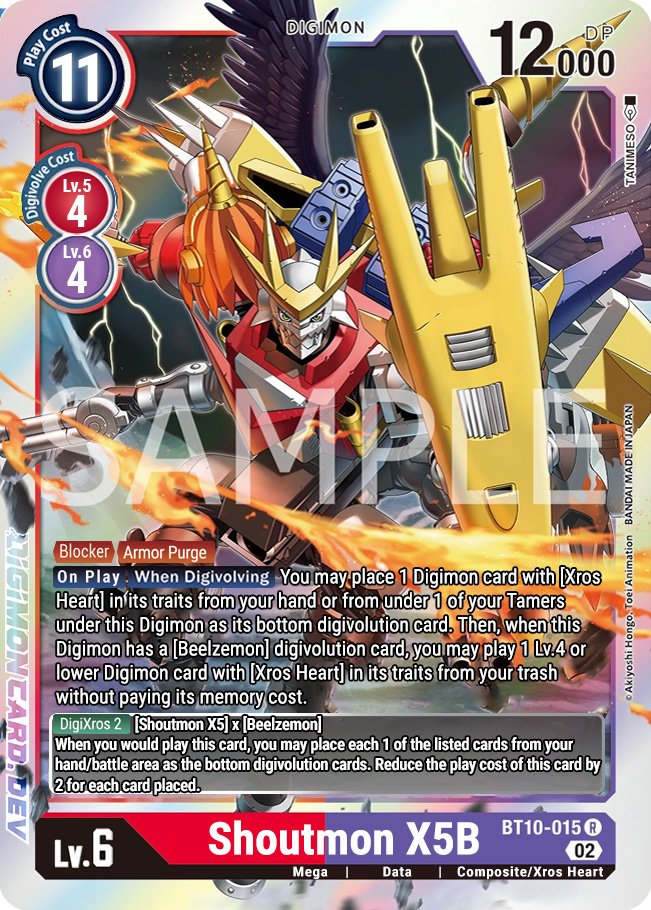 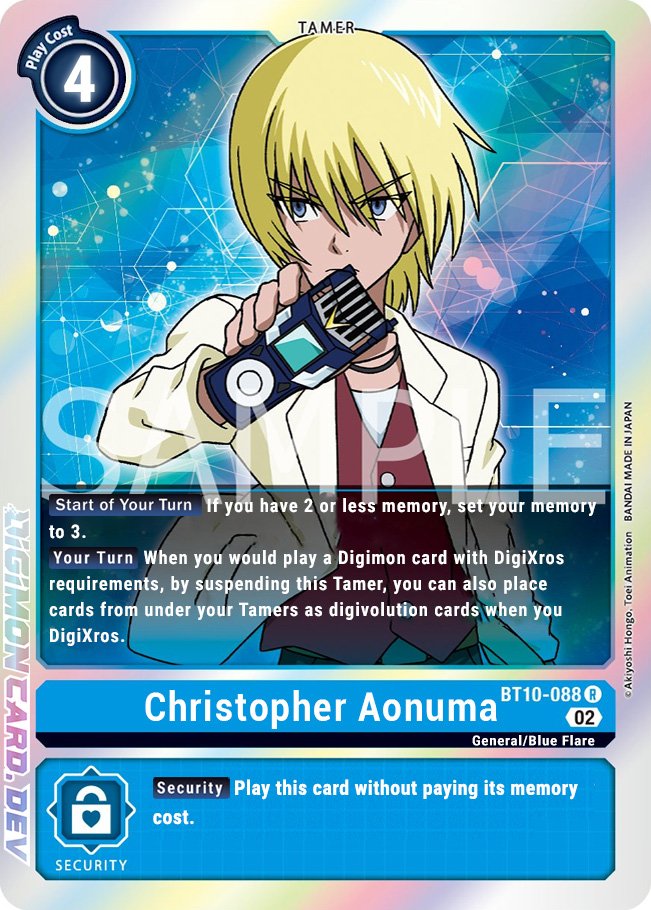 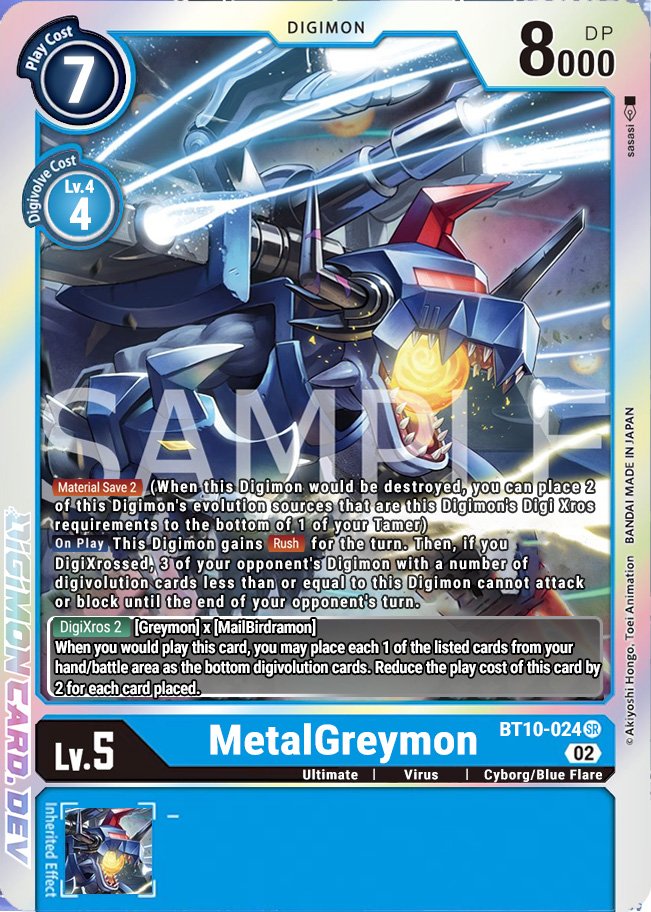 Meanwhile, [BT10-092] Amano Nene would mostly work with DarkKnightmon, embodying the role of the undying. In addition, this set also introduces [BT10-069] DarkKnightmon X-Antibody along with a new [BT10-066] DarkKnightmon that has a [DigiXros] effect, which should further strengthen the original DarkKnightmon tribal deck. 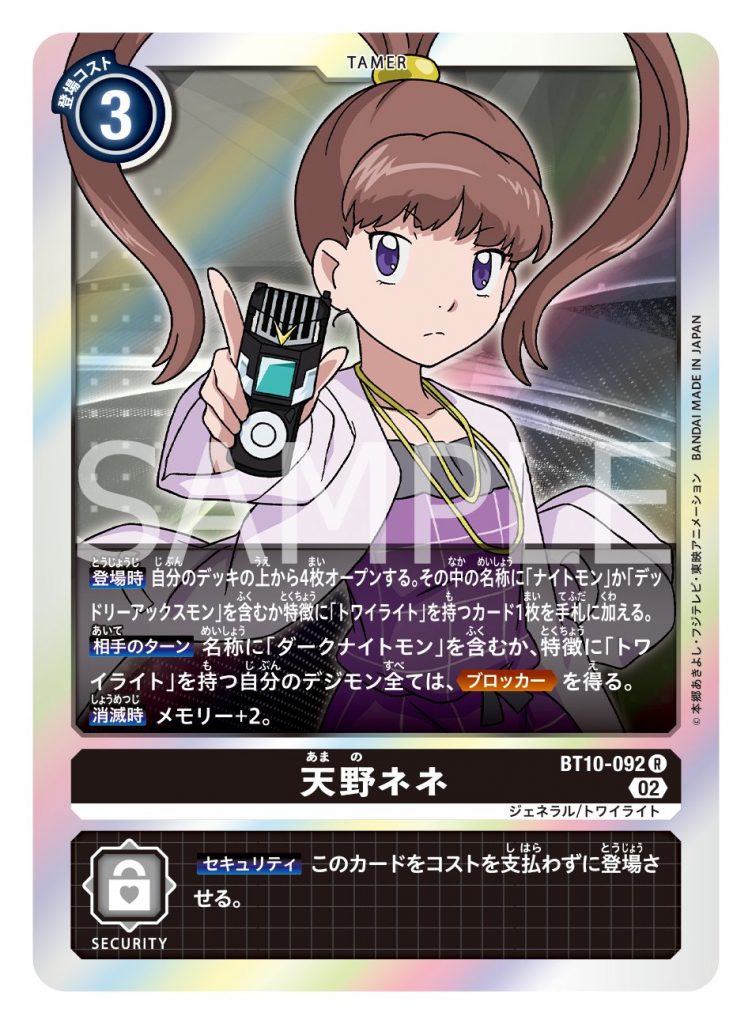 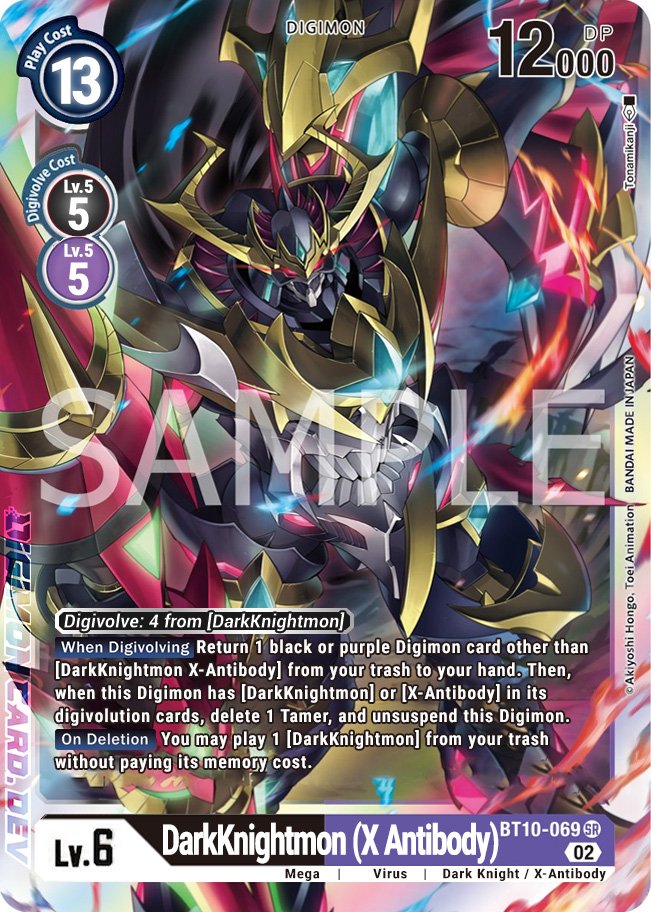 On the other hand, her younger brother [BT10-093] Amano Yuu (Ewan) would lead the Bagra Army using a Darkness Loader that allows him to force a [DigiXros], which is reflected in his tamer card effect allowing him to reduce a Digimon's play cost without that Digimon needing a [DigiXros] effect. 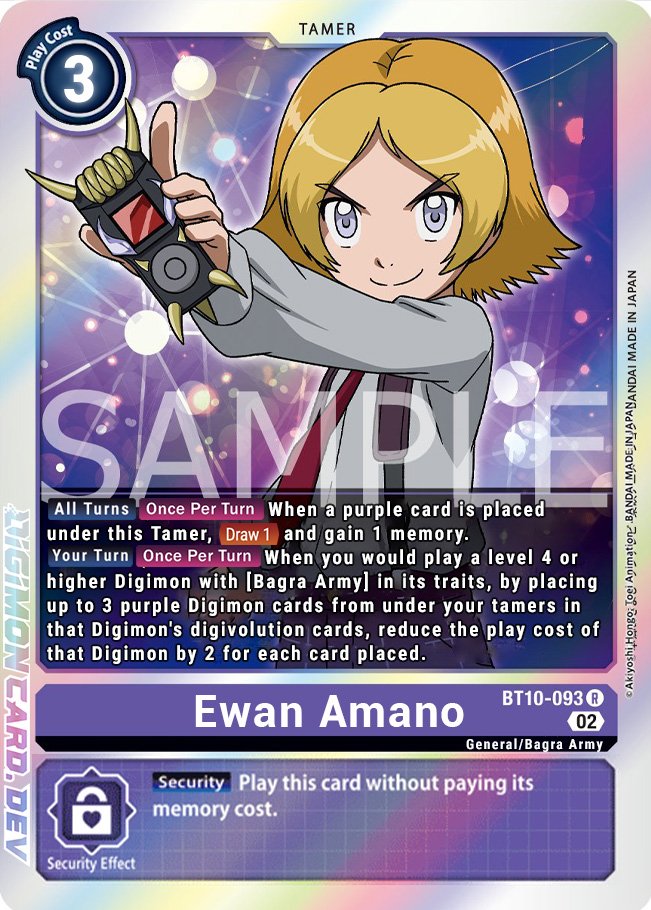 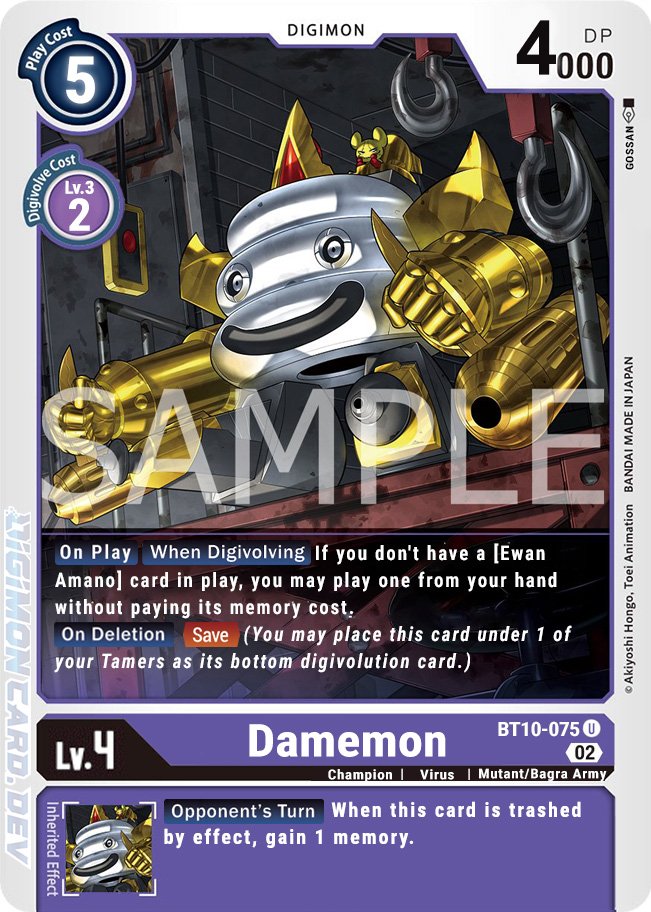 This new system would definitely introduce a much-needed new dimension to the game's complexity, and we very much welcome this system after the rather stale BT-09 X-Antibody meta.

Yes, the Ghost Game Digimons finally get the updated digivolution forms. But we will focus our attention on Gammamon's darker form [BT10-078] GulusGammamon and his LV5 form [BT10-011] Canoweissmon. While GulusGammamon is a very reliable LV4 Digimon, having both a [Retaliation] effect and a semi-revival [On Deletion] effect, the spotlight shines on his LV5 Canoweissmon, which has a unique effect that allows him to gain all the effects from all his digivolution cards with [Gammamon] in name.

Gammamon has got some great potential in the past, and with these new additions we may finally have a mechanic that is uniquely Gammamon! 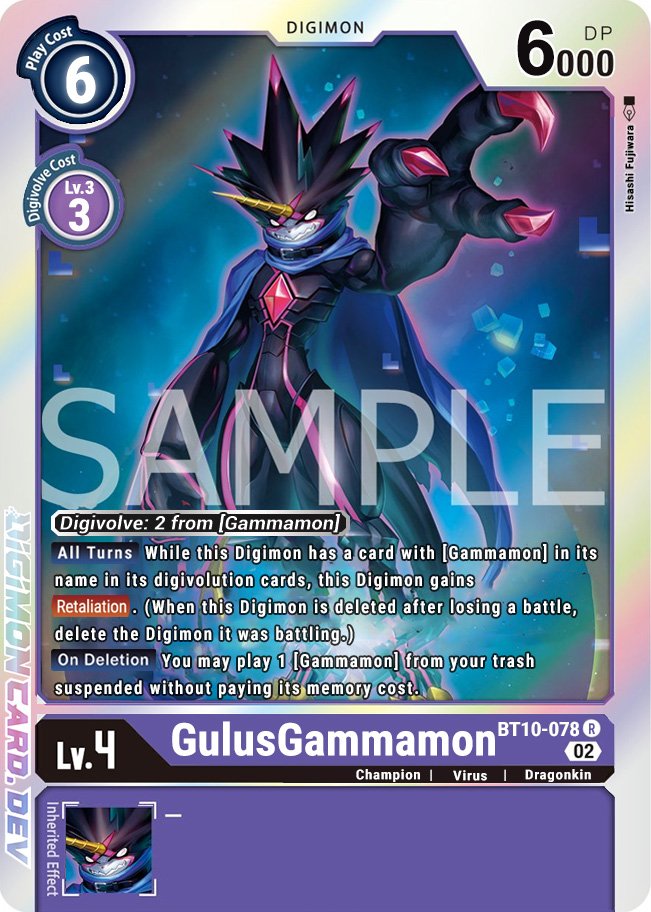 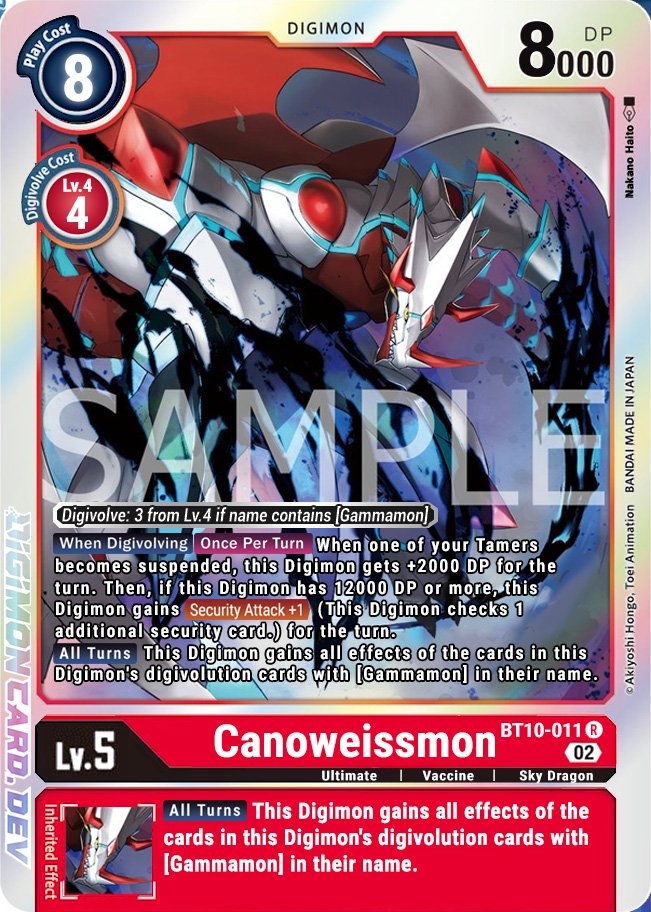 When Rika and her Sakuyamon were introduced in EX-02 there was a lot of hype that lacked substance: a mechanic that relied on plug-in option cards was missing some serious consistency. Honestly, it came to us a surprise that [BT10-041] Sakuyamon: Maid Mode would be introduced so soon, but this Digimon has a seriously good effect allowing some option cards to not only be played for free, but returned to the top of your security. Along with her new line of LV3 to LV5 forms, they should help to stabilize the Rika/Sakuyamon mechanic.

In addition, it is also largely speculated that Sakuyamon: Maid Mode be very useful in a security control deck, so sec-con fans can rejoice! 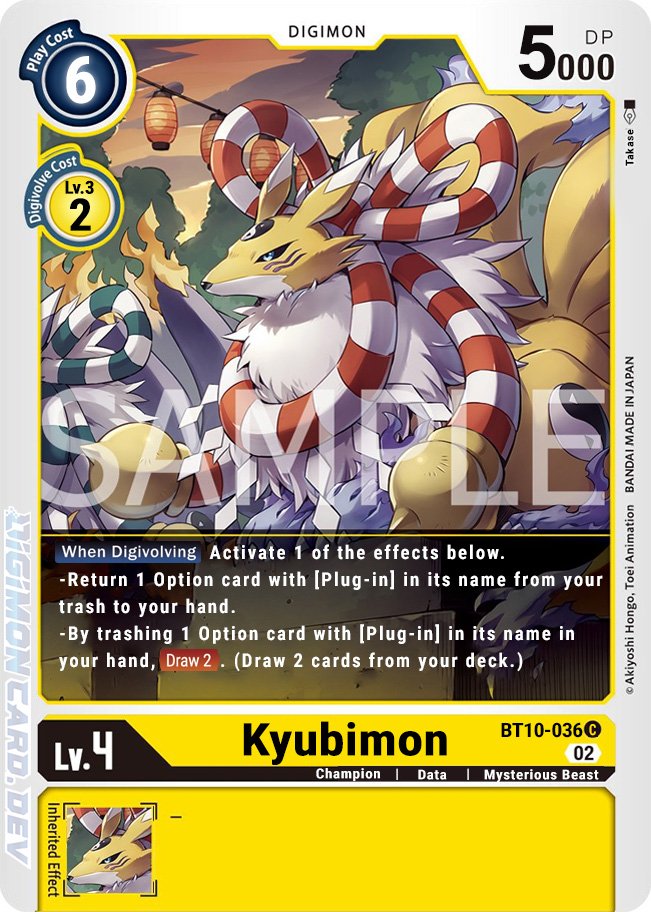 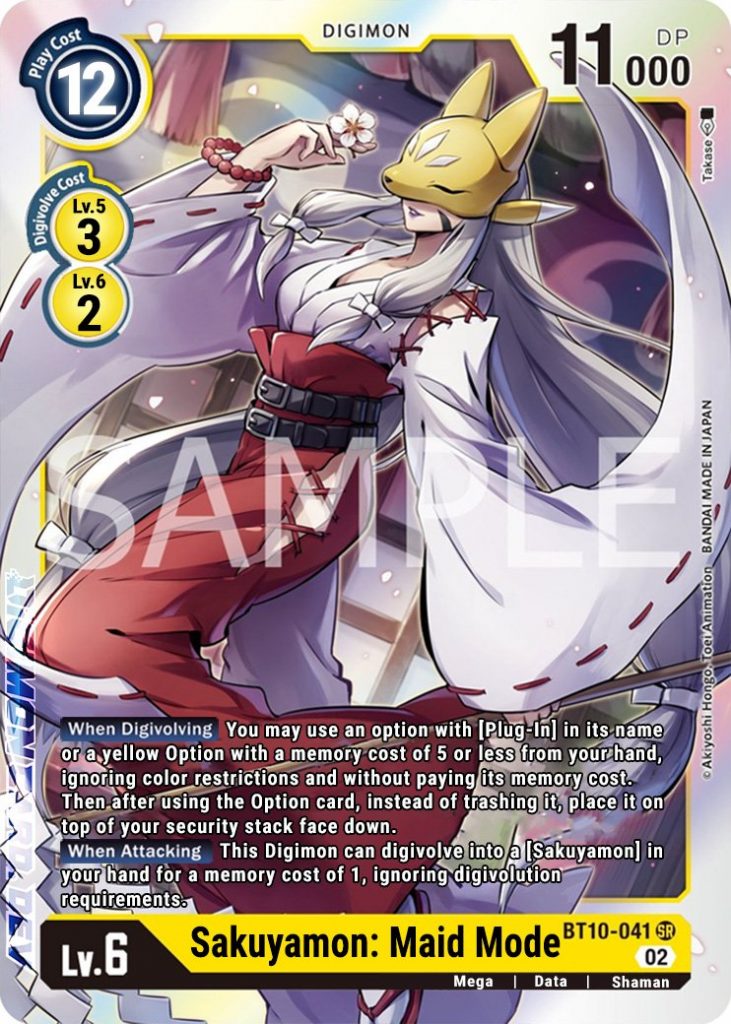 … and saving the fire from an OTK meta

The previous set can pretty much sum to an OTK meta, with the X-Antibody Wargreymon, Metalgarurumon, Grandiskuwagamon, and Alphamon doing too much damage in competitive games. It comes as no surprise that Bandai would first try to dampen this by using some anti-OTK effect, and the first of this came in the form of a sexy [BT10-042] Venusmon. 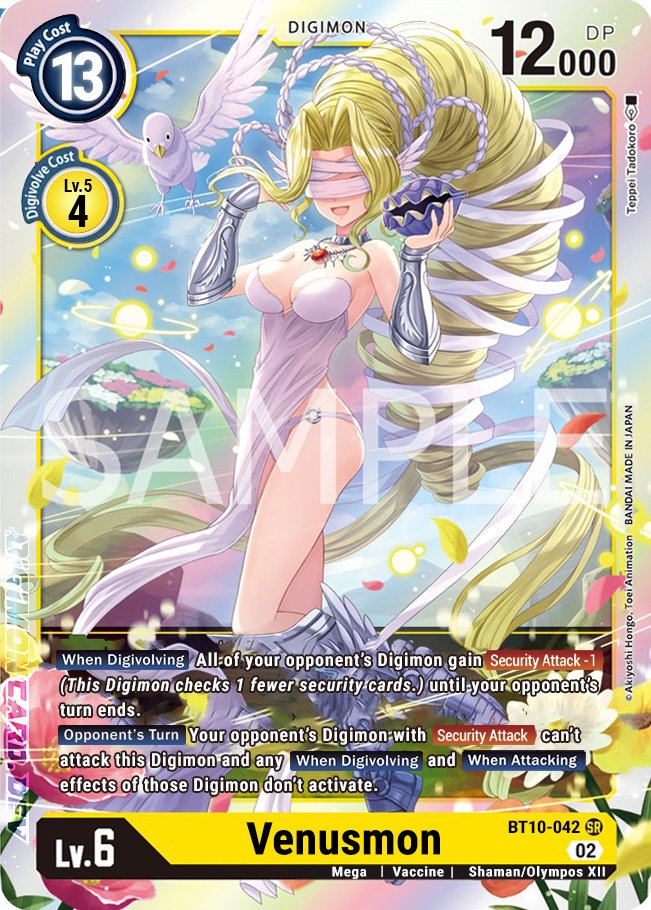 [BT10-023] Thetismon hastens Jellymon's hand-recycling capability, which may see its engine borrowed into other decks for milling. A new [BT10-031] Pulsemon with [Blocker] and the new [BT10-100] Impulse Memory Boost!! option card would allow this mechanic to better sustain the 3-security condition. The new [BT10-052] Cherrymon should strengthen Shivamon, and Justimon gets a new arm in [BT10-067] Justimon: Critical Arm. [BT10-083] Minervamon is a hidden potential that should work with a number of different deck mechanics such as Lucemon Falldown Mode. A new [BT10-086] Omegamon X-Antibody with a unique effect that should help cripple some security control decks. 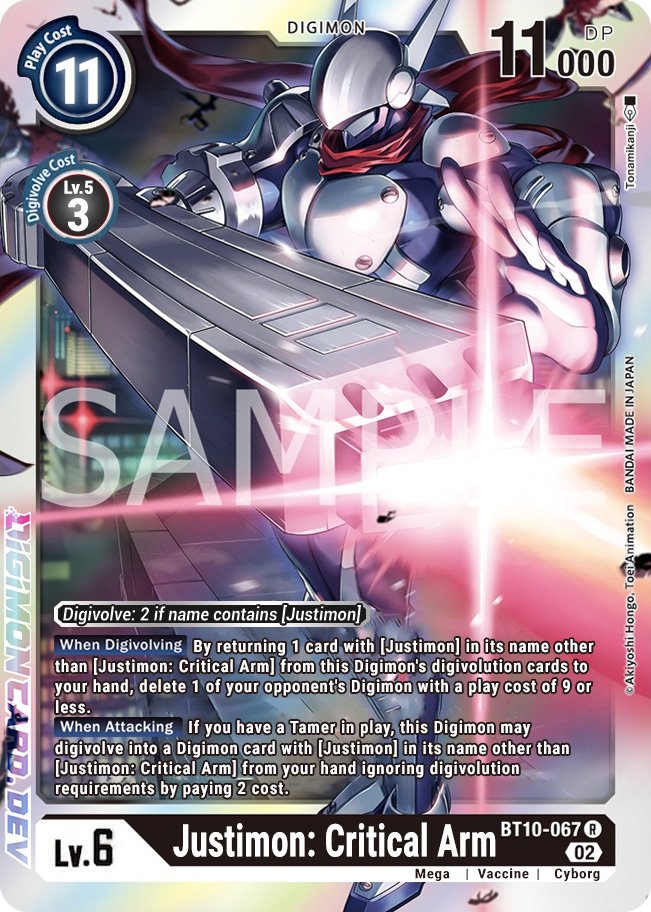 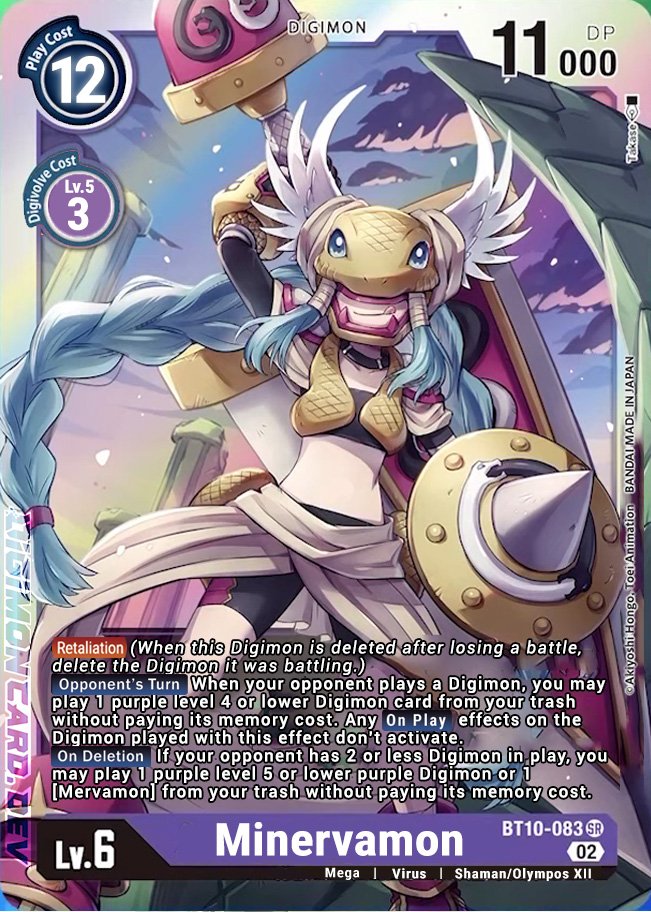 The secret rares of BT-10

BT-10 has 3 secret rare cards, 2 of which were already revealed with the remaining rumoured to be a low pull-rate ghost-rare Alphamon. 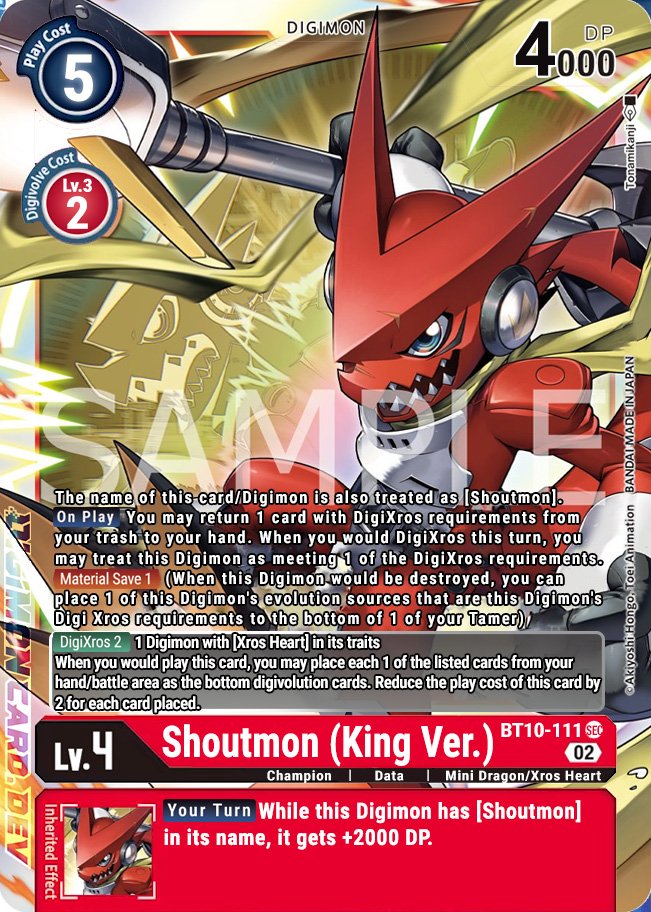 The first SEC revealed was a surprise. [BT10-111] Shoutmon King Ver. is akin to a joker card in any digiXros decks, cementing his position in playability during this meta. 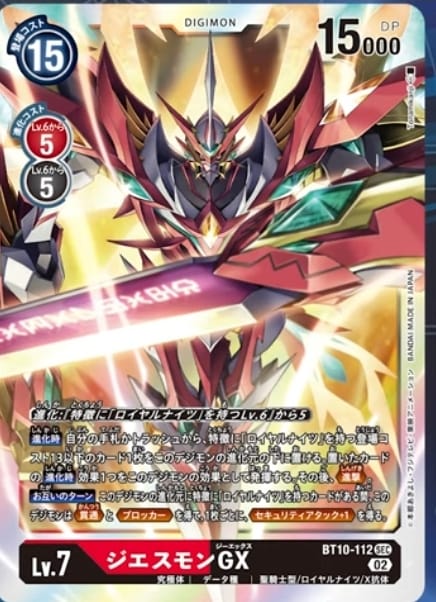 The second SEC is none other than [BT10-112] Jesmon GX, whose effect also came as a surprise as it does not buff specifically the Jesmon archetype but rather the Royal Knights. With so many [Royal Knight] Digimons we have thus far (9 of them has a [When Digivolving] effect), it would be interesting to see if Jesmon GX could revive the older deck engines, or bringing forth some new mechanics never seen before!

BT-10 is certainly an more exciting set than its predecessor, running new [DigiXros] mechanics and some random rebalancing that should shake up some creative deck building. Though there may be some misses and disappointments that some of your anticipated cards were not introduced in this set (such as Bagramon or Shoutmon X7), the current lineup should be sufficient to re-energize the stale BT-09.