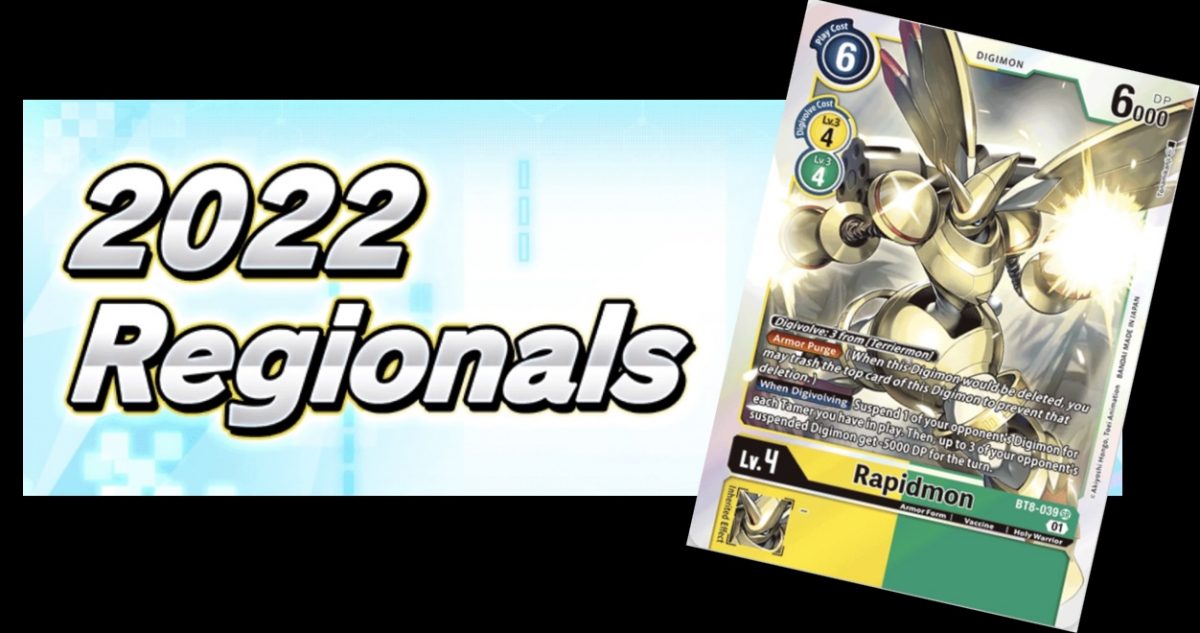 Hello, Zac from down under here. I’ve been asked to give a breakdown of my deck and tournament run for my latest BT8 regionals. To summarise I got 2nd in ranking with 5 wins, 0 losses and 1 draw, in doing so, solidifying my view that yellow hybrids are an absurdly strong deck. My following opinions and takes on the deck and matchups should be taken with a grain of salt based on your play style and how early we are into the new set 8. 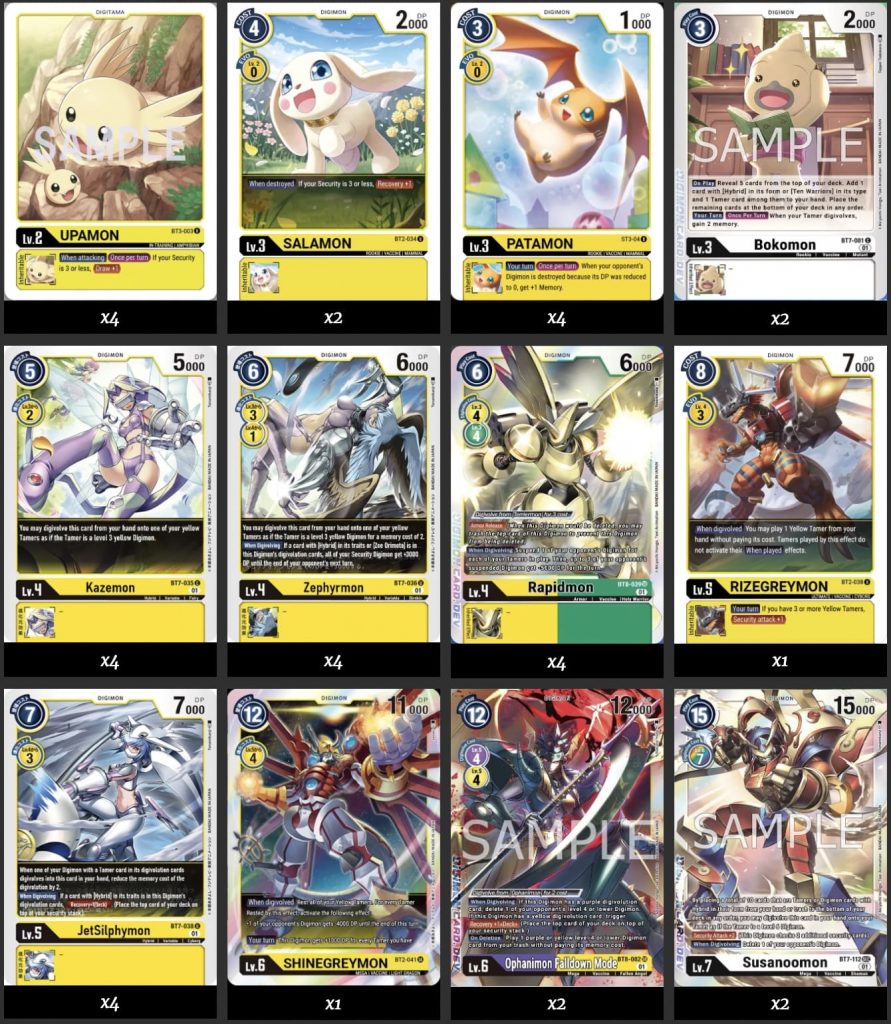 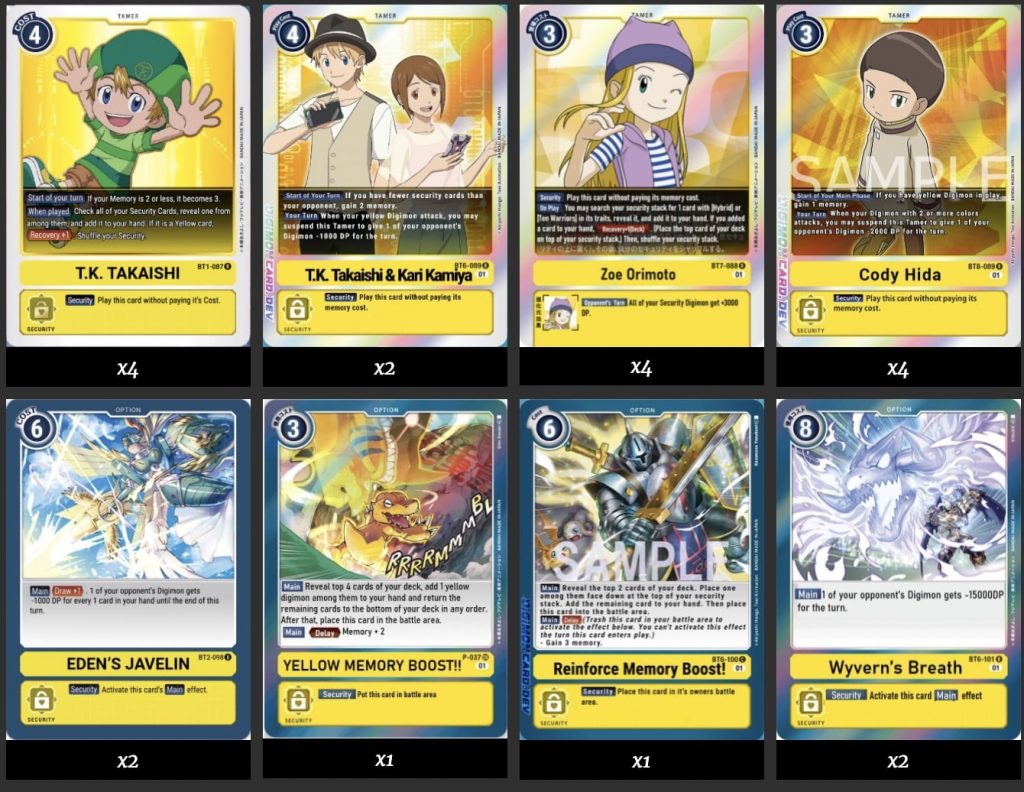 This is my general game plan for most match’s to power through any board and will help set the context for card choices and strategies. This involves chipping over the course of the game and undoing damage dealt back with recovery and answering board states as necessary.

The core of the deck, little to be explained except for Bokomon. I couldn’t understand other lists taking Boko out when it’s a top 5 search for arguably your most important cards and allows for free extensions to help chip your opponent without passing turn.

At this time, this slot seems rather contentious between Upamon and Cupimon. One excels late game, the other early. Cupimon is a great option to push out rookies to swing and start seeing more cards to help slow the opponent into your range. I have seen success with Upa as the format is still very aggressive, in combination with how I play into Rapidmon (which I will discuss in a bit). This one is a personal preference slot (I prefer my foiled Upas).

The rookies are a tiny part of the decklist but are very impactful. The Salamons play the part to be the catchup recovery late game and a great little teaser to play off Ophanimon:FD deletion effect. The Patamon is the important key to maximising Rapidmon’s devastating entry, therefore a must 4 of. Cutemon may be a viable option here into a heavy Mastemon or Hybrid format but personally, I did not feel this was necessary.

This card is insane. Rapidmon is a level 6 Shinegreymon but he’s level 4 AND can use armour purge to stick to the board if answered. Using Rapidmon sparingly to maximise his impact whilst juggling the rookie in the raising area is what makes the deck have a chance against decks like Imperial and what dictates winning the mid game. When the board is lacking threats to yourself, I will push the rookie out of raising to chip at the opponent. Else, if the opponent is building tall or wide, pushing out a stockpiled Patamon in raising and Rapid in hand for the follow up will generally answer any board. The only drawback is Rapid will require you to have tamers to suspend targets to resolve the minus to DP, but given I use the early game to establish the as many tamers logistically possible this is less likely to be a problem.

This is a relic from the BT7 formats build and is completely optional spicy tech. I found relying only on Jetsilphymon as the bridge to level 6s was not consistent and fragile. In combination with how I use Jetsilphymon to get in cheeky chip damage prior to evolving into level 6s I’d find myself running out. Rizegreymon pairs best with the TK and Kari Dual Tamer but as shown in my list I rely on this less for large memory gains. So a good consideration would be if you like the dual tamer, running more Rizegrey is beneficial and vice versa. A comedic interaction emerged during one of my games in which I had evolved up to a Susanoomon whilst Rizegreymon was underneath, leading to Susanoo checking 4 Security instead.

Like most other Yellow hybrid lists, I ran the new dual colour Ophanimon, for its simple but strong effect. Its recovery on evolution and paired with its on deletion make it a tricky card to answer whilst passively threatening 1 check for the opponent even if they kill the card once. This card is a great mid game tool to end your hybrid line to recover till you’re out of your opponent's kill range. The one of Shinegreymon is another optional spot. Throughout my matches, it resolved when it needed to clear problem cards that Rapidmon couldn’t or wasn’t in a position to. The best option I believe I should have run in this spot however would be the BT1-Seraphimon for a cheap recovery and 2 security checks. His 10k attack however feels riskier given BT8s taller security, leaving this spot entirely to preference.

The big Susan fills two simple but key weaknesses for the yellow hybrid game plan, decking out and mirror matches. Susan stops deck outs as the deck draws a lot and stalls till they’re winning, enough said. His key role in closing the game and making headway in mirror matches. My approach for the mirror match will either maximise hybrids evolves to chip aggressively like normal (hand permitting) or build for a large OTK on the back of Susan’s 15k Dp and triple check. This is run as a two of as in every mirror match, if they play Susan, you’ll have to answer back with your own to keep your momentum.

Given the introduction of BT8 Kari tamer, most other hybrid lists include this card to get extra memory from recovering, however, they were making a sacrifice. Ol’ reliable TK in my opinion is too strong to cut, for the latest Kari. TK provides the utility to look and take cards within your security, essentially turning your security into a second hand (Allows me to scope security for options to check if I can be aggressive). Taking away this utility for a potential one memory in a deck that gains a lot of memory while reducing costs and refunding memory, Kari might be overkill. To emphasise this, the more reliable memory gain is generally covered by my remaining tamer choices of Cody and TK&Kari. Both tamers synergise heavily with Rapidmon’s Dp reduction to close out the gap of really tall Digimon.

Both memory boosts serve the same function within the deck to help consistency and extend turns. These are efficient ways to stockpile the necessary memory to enable Susanoomon plays as discussed before without passing turn. I’m future lists I would consider more of the Yellow Memory Boost but I couldn’t source extra for this tournament. The remaining cards are the flex spots. Both of these choices for me were to ideally answer Paildramon from the Imperial decks and other tall Digimon during security checks. As described, they are security bombs to blow up Digimon to regain some momentum. Wyverns hit hard but cost a lot, while Edens was the cheaper but has a smaller reduction to compensate. These ratios can go up or down depending on how much you want to rely on security or removal to win games. For my tournament experience, they came up as needed. (Twice during the tournament, Paildramon Swings into my Security, Hits Edens, I only have 7 cards in hand, Pail lives with 1k. Probably a decent reason to just play wyverns instead)

Cards that weren’t included but might be worth considering:

Cupimon – Patamon generally sits in raising until rapid is worth going for, may not resolve too many draws on higher security

Purple Kari Tamer – Better at staving off aggro rather than tall decks, may be required to enable the dual colour options above.

Throughout this breakdown I have mention “chip” damage consistently. This my overall approach for the deck as Jetsilphymon is unrivalled in chipping security while healing your own. This mindset allows you to play at a quicker pace than normal and less time fumbling around in a game mindlessly recovering. This mindset also transfer to Ophanimon:FD and Rapid in which you can swing and chip freely whilst they are on board and do not mind if they die during their checks as they both leave a Digimon on board for your opponent to deal with while not checking your own security. This stratagem is obviously match up dependant given piercing and decks like BT8 Blackwargreymon. My final thoughts being especially when paired with Bokomon the deck can win games quickly in both amount of turns and time, both of which seem to be a problem for players in the meta.

In closing, I’m proud of how the deck performed and how I played most matches. The deck is great at adapting for the meta or personal preference. I would not take anything I’ve stated as gospel as the English Digimon community will always innovate even knowing the Japanese meta ahead of time and I hope to do the same. Thanks to my locals and friends for being competitive and reliable testers.

I play tamer. I play jet. You lose.