With BT-10 Cross Encounter release, we got the long waited first Evolution Cup since in Asia region it was delayed. Since it’s early in the meta there have been variation based on the new BT-10 cards. There’s the Mixed/Xros Heart, Blue Flare, Dark Knightmon and we even still see deck from the meta before such as GrandisKuwagamon, Blue Armor, and Yellow Hybrid.This time I don’t have time to prepare for the tournament since I just got back from vacation.

After observing the winner of the early weeks of BT-10 release, I decide to try Magnamon X to the Blue Flare deck since there’s a lot of aggro in the meta and many of the deck have low DP Digimon such as Xros Heart with X5 only have 10K DP and Blue Flare with Metalgreymon with only 8K DP. While Dark Knightmon can devolve Magnamon X, they don’t have the rush like the other deck. This deck can even handle mirror match against Blue Flare better because Magnamon X with X-Antibody option doesn’t even care with the stun from MetalgGreymon or DeckerGreymon, Magnamon X can still redirect the attack. 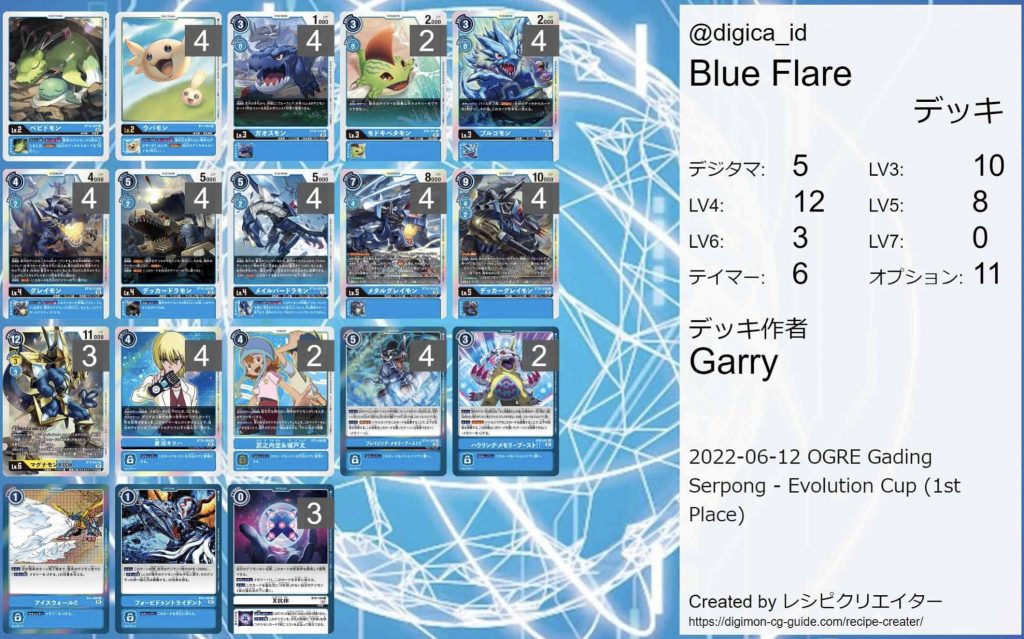 Upamon is still the best Digitama for most of the blue deck right now, since the deck have ways to discard the enemy’s evolution sources and there’s a lot of Digimon without sources (literally the Xros Heart with their free play Digimon from Tamer). You can also run the new Digitama, Bebydomon in this meta with a lot of Digimon in the battle area it’s easy to get the draw effect.

For the Rookies, I have seen a lot of variation such as Veemon (combine with Chibimon to get draw) and Jellymon (to remove enemy’s rookie). While Gaossmon is a must in Blue Flare Deck, I find that Bulucomon from the promo is really helping the deck. Since the deck relies on the new mechanic DigiXros, we don’t get a draw by evolution or effect like ShoutmonX4, sometimes hand size feels really small. ModokiBetamon also still good to block the enemy delay effect from memory boost.

As for Champion, I use all the Blue Flare Digimon. Ideally we want to play MailBirdramon from Gaossmon effect to play Kiriha for free, but if I have Blazing Memory Boost and already play Kiriha for free, Greymon and Deckerdramon is the best choice. Usually if there’s more than 2 Digimon on the enemy’s side I play the Deckerdramon. Remember to recycle MetalGreymon when Kiriha on the battle area by playing Mailbirdramon or Greymon if needed. I think if you can find the slot playing the red Greymon (Security Atk+1) and one or two Hybrid are also good. Another notable thing is Deckerdramon ESS does not required your Digimon to be a Blue Flare and sometimes when the opponent have 2 Digimon Magnamon X DP can get boosted to 12K. Becareful though Greymon and Mailbirdramon ESS need your Digimon to be a Blue Flare to activate it’s effect.

I only play 3 copy of Magnamon X no more no less, I find it to be the best at 3 you won’t have too many since it cannot be search by all the searcher in the deck. Remember to play the X-Antibody option or Magnamon X redirect effect won’t activate. 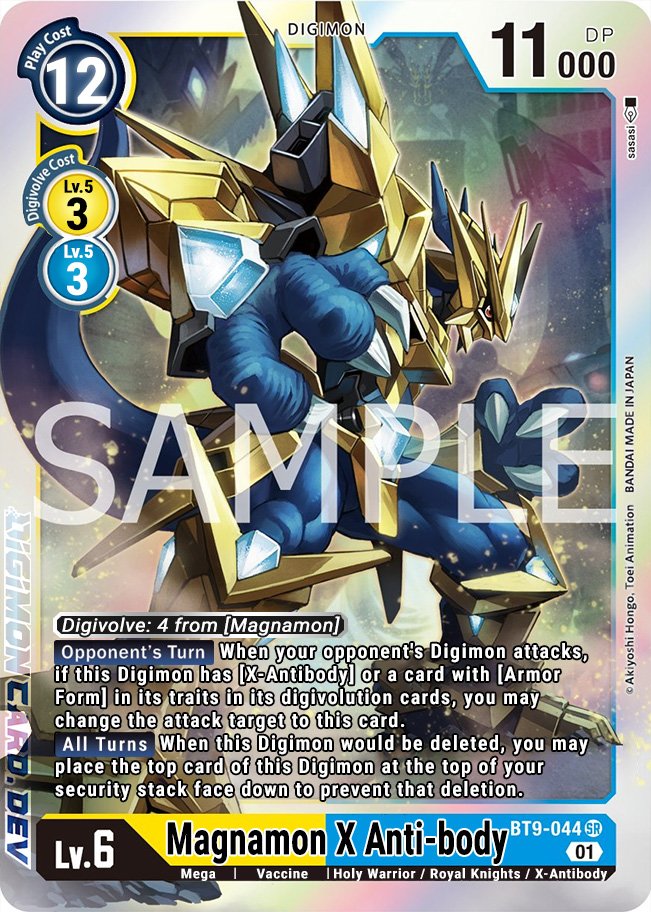 Playing 4 Kiriha for consistency is great but same as DeckerGreymon if you confident you can play it from MailBirdramon or Blazing Memory Boost easily you can play it at 3. Sora & Joe is a great tamer this set since the enemy will play their Digimon without sources (Xros Heart and other rookies such as Psychemon, Solarmon, etc) and it help you to reduce the enemy source as well, you can experiment more with this card to find the comfortable copy of it, for me it was 2.

4 Blazing Memory Boost is a must, this card is just too good might be the 2nd best memory boost after Reinforce Memory Boost from the Yellow Deck in game right now. Howling Memory Boost is also a good card to stun your enemy when you can’t play the MetalGreymon or DeckerGreymon. Because I play many memory boost I need to find the way to use it when it block by ModokiBetamon, Gazimon, and Terriermon my answer for it is the Forbidden Trident (alternatively you can evolve to level 4 if your rookie is Jellymon but I find this hard for the consistency). Forbidden Trident is also good to remove Solarmon, Psychemon, Chikurimon, Pillowmon and Pomumon (since Gaossmon effect of playing Digimon by effect won’t activate if there is Pillowmon or Pomumon in the field). Ice wall is just always broken when the timing is right, bring 1 copy of it will never hurt your deck (hell I know people will bring 4 copy if it was not limited).

Last but not least is the X-Antibody option to activate Magnamon X redirect effect (you can also just use it so your Digimon to have sources to negate enemy extra memory from Sora & Joe Tamer). 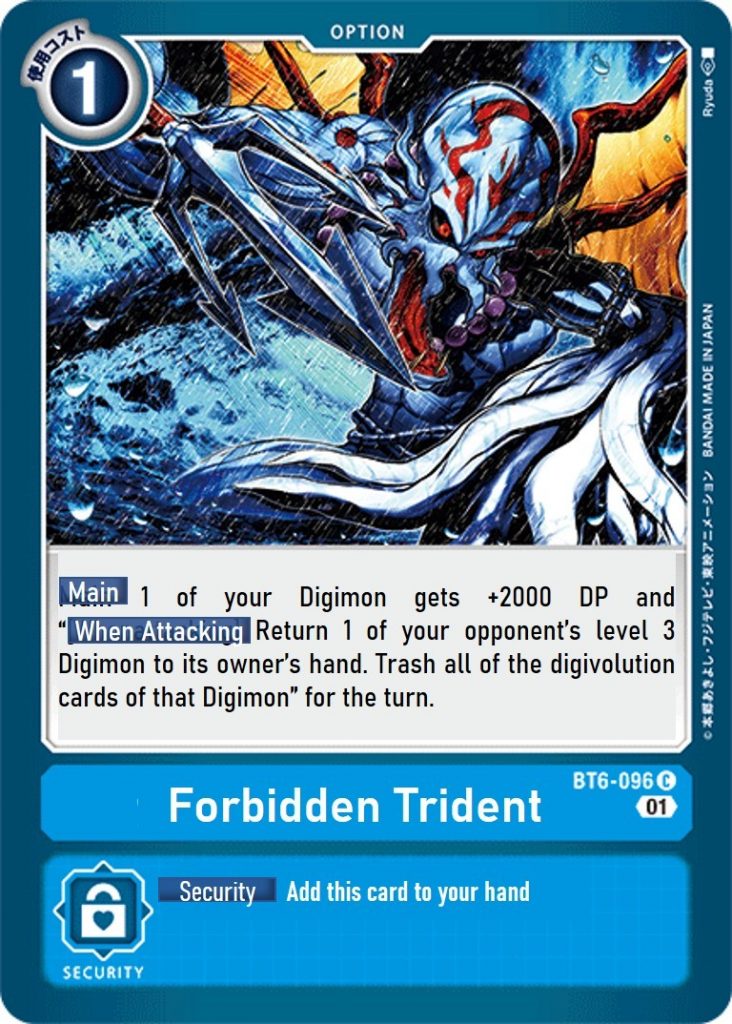 First Opponent is a mirror match between Blue Flare. In this two game the enemy find it hard to attack my security since I have Magnamon X early in the battle area. While I’m winning the aggro game, the enemy also can’t remove my ModokiBetamon that lock 2 of his Blazing Memory Boost delay effect making me lead more. Of course, the stun game between us is crazy but once again Magnamon X save the day.

Second Opponent use the Dark Knightmon deck. I find this to be annoying since Dark Knightmon can De-Digivolve my Magnamon X or worst it can De-Digivolve my MetalGreymon and delete Greymon instantly. The first game is a bit slow since I brick and can’t find my MetalGreymon until half of my deck drew. But by evolving Deckerdramon into DeckerGreymon I can hold the enemy well until MetalGreymon comes to play and finish the game. The second game I have a better hand and with the momentum from Gaossmon and MetalGreymon rush I lead the game far ahead early. Before I can finish the game I even defend my security and field with Magnamon X.

Third opponent use the GrandisKuwagamon deck. This is the same opponent I faced in the Final Community Regional before (Previous article in Digimonmeta cc: https://digimonmeta.com/2022/03/24/garry-yeung-bt9-armor-rush-deck-blue-players-last-hope-in-dc1/) . In the first match, I hit opponent’s Mimi in first security, I thought the game gonna go bad after that but with Blazing Memory Boost I can also play Kiriha. After that he don’t have any lvl 4 in hand and hard play an Okuwamon for 7 cost. From there I always stun his Digimon using MetalGreymon and DeckerGreymon and giving him no chance to clear my security with OTK. The second game is also a bricky game for the GrandisKuwagamon player therefore I always play with a lead and end the game 2-0. For me DeckerGreymon and MailBirdramon is the MVP in both of these two match since the enemy can play X-Antibody option and always have the upper hand in number of sources so its hard to use only MetalGreymon stun effect.

Fourth round I finally meet a Xros Heart deck (probably the most popular deck in this meta). In game 1, while we both have a slow game I find it hard to use Greymon restand effect and aggro the game therefore I evolve Magnamon X early to counter the enemy’s aggro. But my enemy run Sunrise Buster and immediately delete my Magnamon X. After losing the aggro game and without a second Magnamon X in the hand I lost the first game. The second game I had a chance to chain stun three Dorurumon since its hard for him to remove it from field to DigiXros (well its all Dorurumon he have to digixros three times to remove it from his field) I have the lead with Greymon’s ESS and win the aggro game. The third game is a close one because I misplay in the turn I can stun both of his Digimon, I dumbly attack with Greymon and got block by Ballistamon (both dead thefore he only have 1 Digimon now) but because Magnamon X is early on the field I can hold the enemy aggro well and seeing his sunrise buster goes down while searching using Taiki I won the game.

Final round is also a very intense one because I know the Xros Heart deck can aggro faster than me and probably end the game before I can chain stun his Digimon. It’s even harder when you already stun the enemy and he use it for Shoutmon X4 Aggro and save all of his sources. At first I thought I had the first game in my hand while I have 2 security left and the enemy only have 1 security left. I have a rookie in hatching area and I can play MetalGreymon to end the game next turn. I pass the turn by giving my enemy 1 memory. Then I got surprised by his Gravity Crush and he end the game (Atk by Rookie and 2 times Shoutmon X4). Since I know he running gravity crush this time I play it more safely by always giving him a little memory and playing Ice Wall and ModokiBetamon in the right timing after a while I lead and finish the game. Third game is the most intense game by far in the tournament, I think we both have our best hand at start. The enemy aggro me very early I lost my first 3 security before I even touch his. But by stunning his Digimon I also hit back with MetalGreymon. There also a moment where I can stun his Shoutmon X5 and throw all his sources using Sora & Joe and Howling Memory Boost. At that moment I’m pretty sure I can hold the game with Magnamon X and get the game. At his last turn I got surprised by him using 2 Gravity Crush at the same time but he don’t have the DP to get pass my Magnamon X and I won the game by holding that round.

I think Magnamon X probably the best mega so far for Blue Flare but I remind you that this is still early in the meta and I find it that my enemy have many solution for Magnamon X. I might be experimenting with other Mega or probably joining the other player by not playing any mega and just focusing on aggro, but for now this is the deck that I comfortable with and thankfully I won Evolution Cup at Ogre Gading Serpong with it. Hopefully I can win more since there is still a lot Evolution Cup this time around. Goodluck for all of you and hopefully you can also get the Omegamon or Agumon Prize from Evolution Cup, Cheers!