Today we take a deeper look at these 2 tamers to see if they are worth their hype!

The most expensive tamer to play to date, Mirei is the first tamer to grant +1 memory unconditionally at the start of turn. However, she may pale in comparison to dual-tamers which gives +2 memory when a simple condition is met (such as [BT6-089] TK & Kari) or the newer +1/+1 memory when one or two conditions are met (such as [BT8-088] Davis & Ken). In fact, we also have tamers (such as [EX3-065] Hina) that grant +1 memory at the simplest conditions but only 3-cost to play! 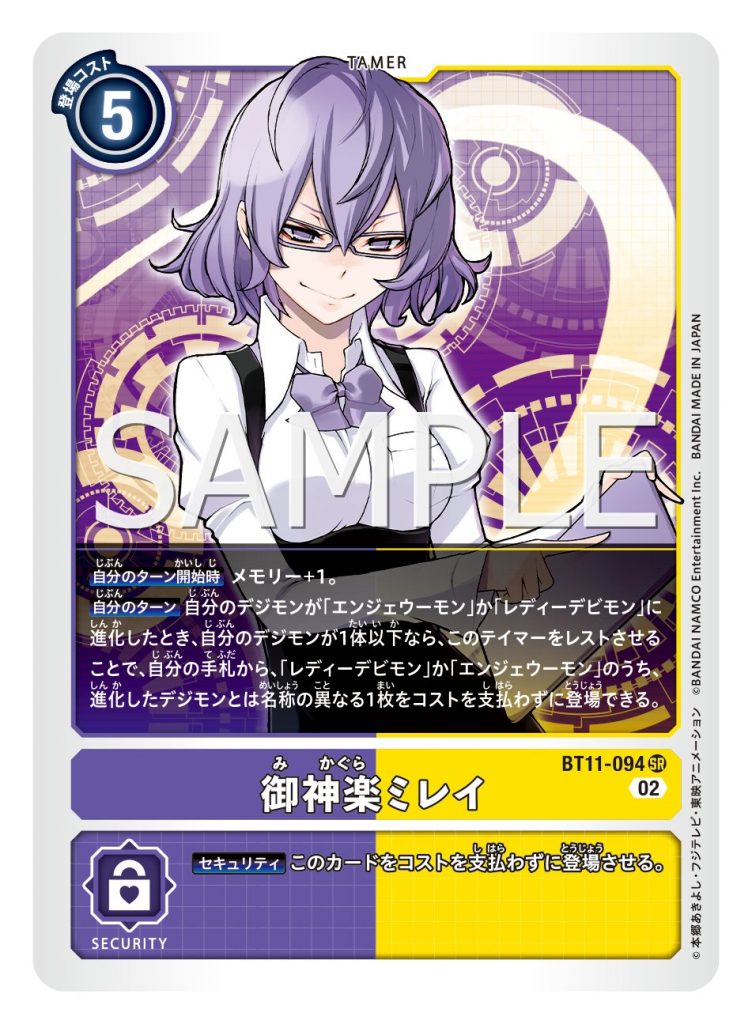 [BT11-094] Mikagura Mirei
– [Start of Your Turn] Memory +1.
– [Your Turn] When your Digimon digivolves into [Angewomon] or [Ladydevimon], if you have 1 or less Digimon, you may suspend this tamer to play a [Angewomon] or [Ladydevimon] from your hand with a different name from the digivolved Digimon without paying its cost.
– [Security] Play this card without paying its cost.

Mirei's second effect is perhaps her best, allowing you to play a reciprocal Angewomon or Ladydevimon from hand. However, do note that the only Digimon in this roster that has a [On Play] effect is the [ST10-05] Angewomon.

While she is by no means a bad card at all, she is 6 cost to play, and synergies with Flame Hellscythe. Also, since she is mainly played in Mastemon decks, 6 cost to pass the turn for Jogress gives you a lot of freedom for not needing to setup and to be able to promptly react to the opponent's board at any time (given you have [ST10-04] Tailmon's inheritable effect of course).

With Mirei Mikagura, you will need some setup by first investing 5 cost for this tamer which does almost nothing, then digivolve into Angewomon or Ladydevimon in order to trigger her effect to play the other. While this does relieves some reliance on [ST10-04] Tailmon, playing a 5 cost tamer in the BT-11 meta in turn-1 or turn-2 may put you within firing range of the likes of Blackwargreymon. 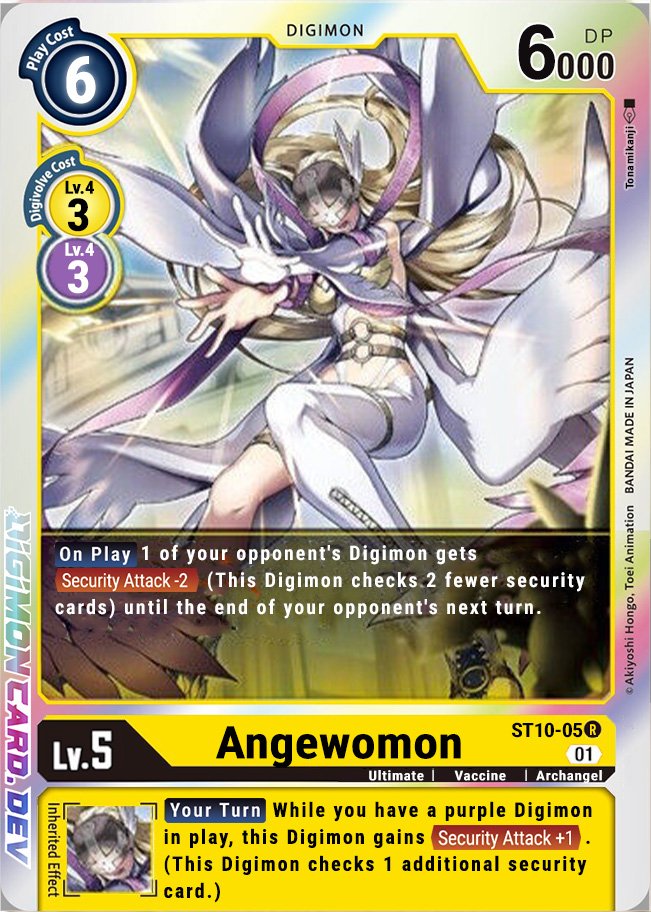 However it is possible to play Mirei effectively using option cards like [BT9-099] Sunrise Buster and [BT7-079] Cherubimon so that opens up possible deck building ideas. The Sakuyamon Maid Mode – Sunrise Buster combo can be an appealing engine here, since Maid Mode can digivolve from LV6 Mastemon.

However, do note that Mirei's effect has one very restrictive condition requiring you to have exactly 1 Digimon in play to trigger. This means that multiple copies of Mirei in play will not stack and bring any additional benefits (at least not immediately). 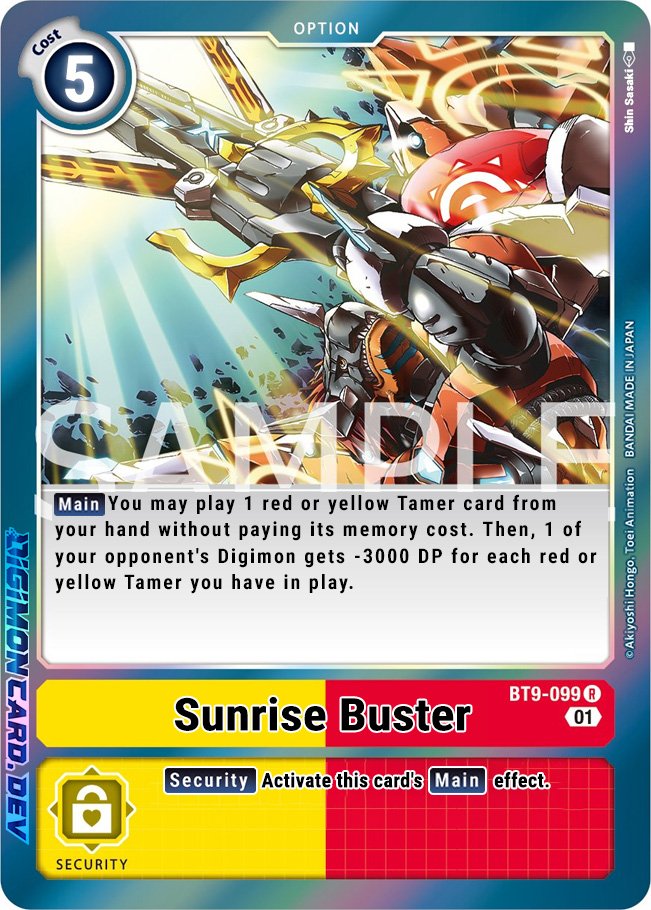 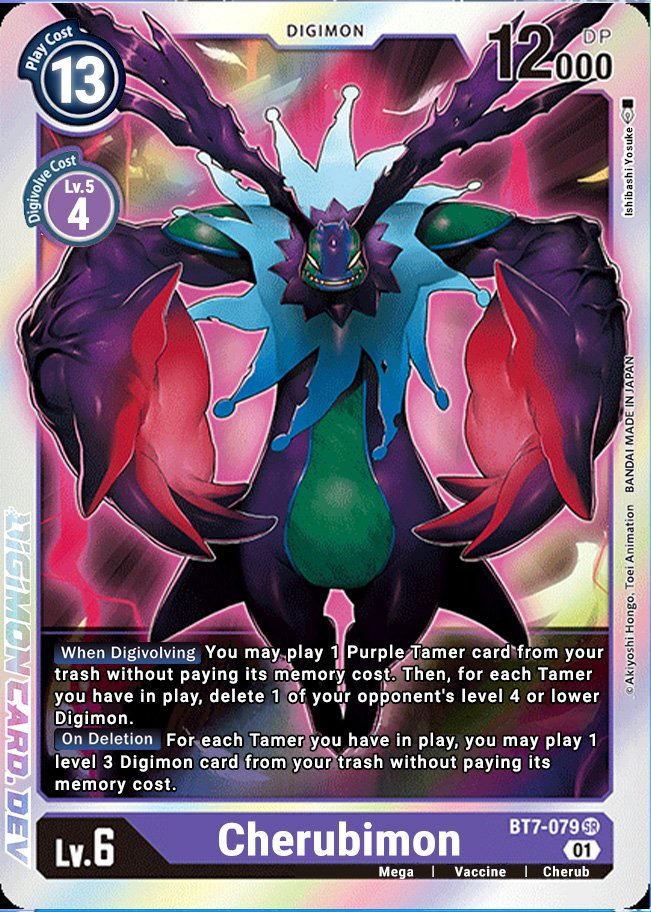 Also interesting is that with Mirei, the Angewomon and Ladydevimon engine relies less on "negative memory". While in the past it is almost necessary to jogress into Mastemon when turn passes to the opponent, it is not so much the case now.

If Tailmon digivolves into either Angewomon or Ladydevimon at 1-cost, you can play the reciprocating LV5 Digimon for free and you will still be at your turn. This opens up some new possibilities such as Angewomon X-Antibody and other LV6 Digimons other than Mastemon (such as Ophanimon?)

This card is just downright special right now. Not only is she the first SEC tamer card, but also very beautifully illustrated with borderless art (we cannot confirm whether this is the alternate-art at this moment). 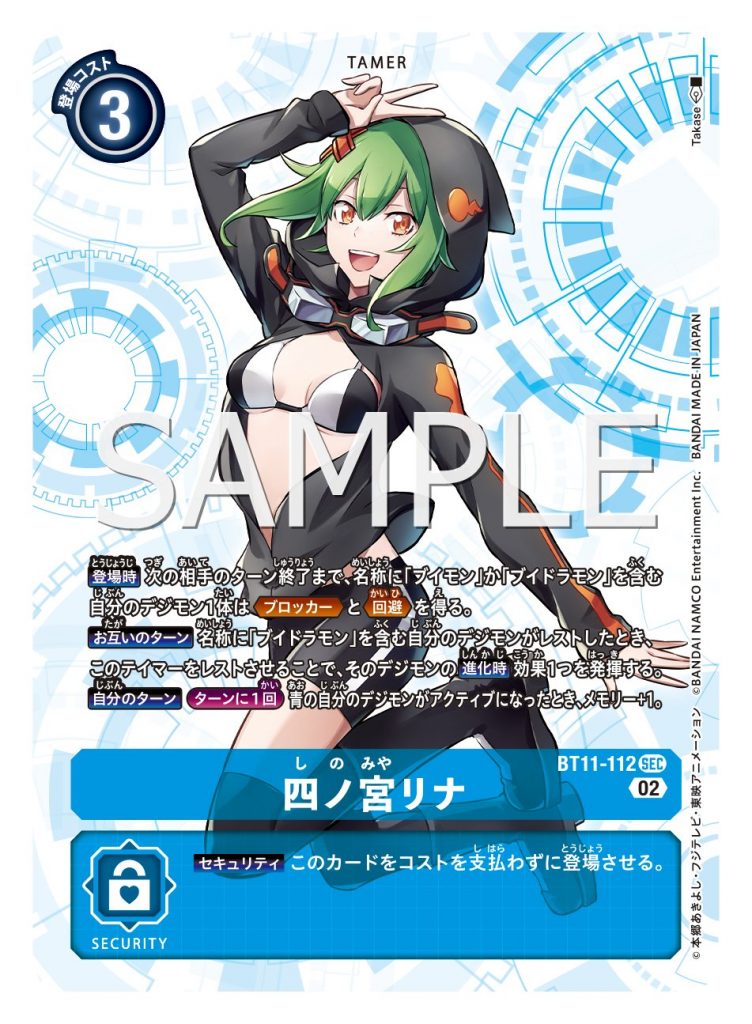 [BT11-112] Rina Shinomiya
– [On Play] 1 of your Digimon with [Veemon] or [Veedramon] gains [Blocker] and [Evade] until the end of your opponent’s next turn.
– [Both Turns] When your Digimon with with [Veedramon] in name is suspended, you may suspend this tamer to trigger 1 of that Digimon’s [When Digivolving] effect.
– [Your Turn][Once Per Turn] When your blue Digimon is unsuspended, gain +1 memory.
– [Security] Play this card without paying its cost.

Rina is a very simple and powerful card. At mere 3-cost she grants so much buff to your Vee(dra)mon line. With her second effect, an immediate combo cannot be ignored. 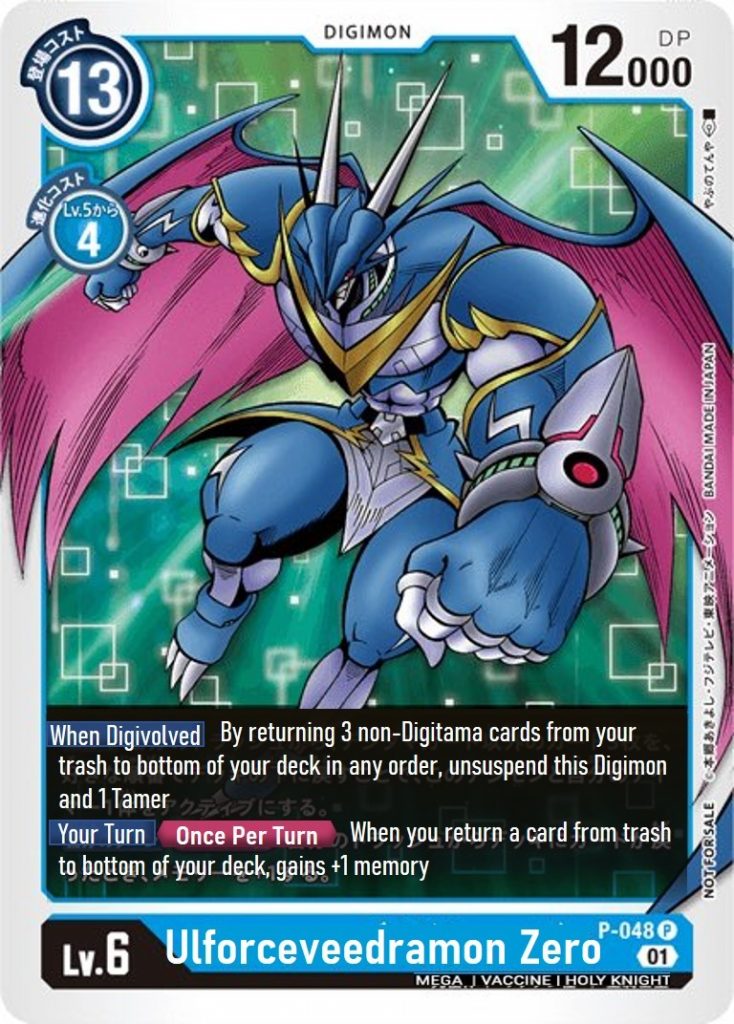 An OTK scenario is found with [P-048] UlforceVeedramon Zero, where an attacking Ulforce Zero will trigger Rina's effect, suspending Rina to trigger Ulforce Zero's [When Digivolved] effect to unsuspend both Zero and Rina, and repeats.

This is a game scenario so strong and unfair that it literally calling Bandai for a ban, but until that happens, this is a very powerful and viable combo and has seen Ulforce Zero sold out in Japan within minutes of Rina's official reveal today.

An OTK scenario is found with [P-048] UlforceVeedramon Zero, where an attacking Ulforce Zero will trigger Rina's effect, suspending Rina to trigger Ulforce Zero's [When Digivolved] effect to unsuspend both Zero and Rina, and repeats.

This is a game scenario so strong and unfair that it literally calling Bandai for a ban, but until that happens, this is a very powerful and viable combo and has seen Ulforce Zero sold out in Japan within minutes of Rina's official reveal today. 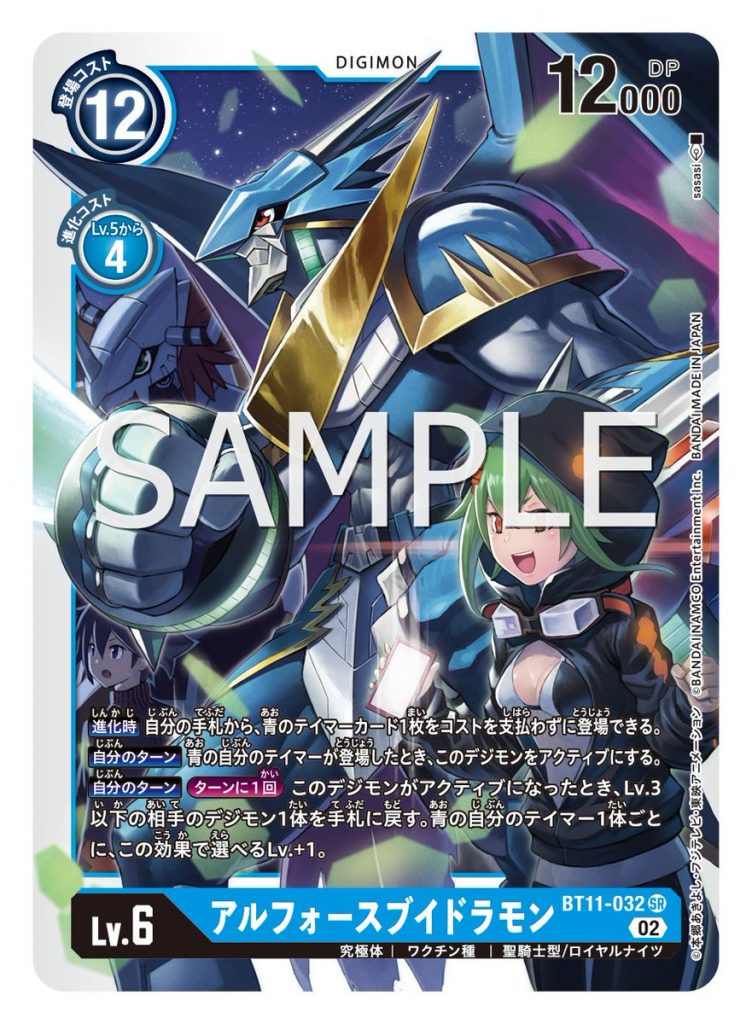 In the event that Ulforce Zero gets banned, Rina would fallback to her natural synergy with [BT11-032] UlforceVeedramon, which is very powerful in its own right!

He will gain [Blocker] and [Evade] when digivolved, thanks to Rina's [On Play] effect, and bounces an opponent's Digimon back to hand (for context, a LV5 when you have 2 tamers and a LV7 when you have 4 tamers). When attacking, Rina would trigger his [When Digivolved] effect to play another blue tamer. Good candidates are of course Rina herself, or Davis, Davis/Ken, or even Jeri Katou if you play a Leomon base.

UlforceVeedramon can also be played with a semi Examon line, for that synergy with Slayerdramon and the [Blocker] state that Rina grants!