Xros Heart has been dominating the tier list since BT-10, with many succumbing to its sheer aggressiveness and efficiency. However, the BT-10 Xros Heart roster was mostly considered as incomplete due to lack of bigger Digimons such as OmegaShoutmon, ZekeGreymon, and X7.

In BT-11 we finally have a much more complete roster, but is Xros Heart 2.0 truly better than 1.0?

A quick summary of Xros Heart 1.0

In BT-10 Xros Heart (aka 1.0), the game plan is very close to rookie rush. In addition to the 12 copies of LV3 Digimons, Dorurumon and Ballistamon can be played by tamers Angie Hinomoto and Jeremy Tsurgi. Each of these Digimons will swing security and become DigiXros material for Shoutmon X4 (for draw power) and X5 (for aggression), both to inherit Shoutmon's [Rush] effect.

The abundant tamers provide necessary draw power (from Angie and Mikey) and memory (from Jeremy) to sustain heavy DigiXros-ing, but the true MVP here is undoubtedly Mikey (Kudou Taiki) solely for his ability to use materials under your tamers as DigiXros materials, which helps to sustain multiple single-turn DigiXroses into X4 and X5.

As all the Digimons in this deck are somewhat lacking in board control, especially against bigger Digimons, Sunrise Buster and Dexmons are usually included for this episode. In a way, Sunrise Buster becomes an essential component of this deck thanks to its compatibility with the sheer number of tamers in deck. 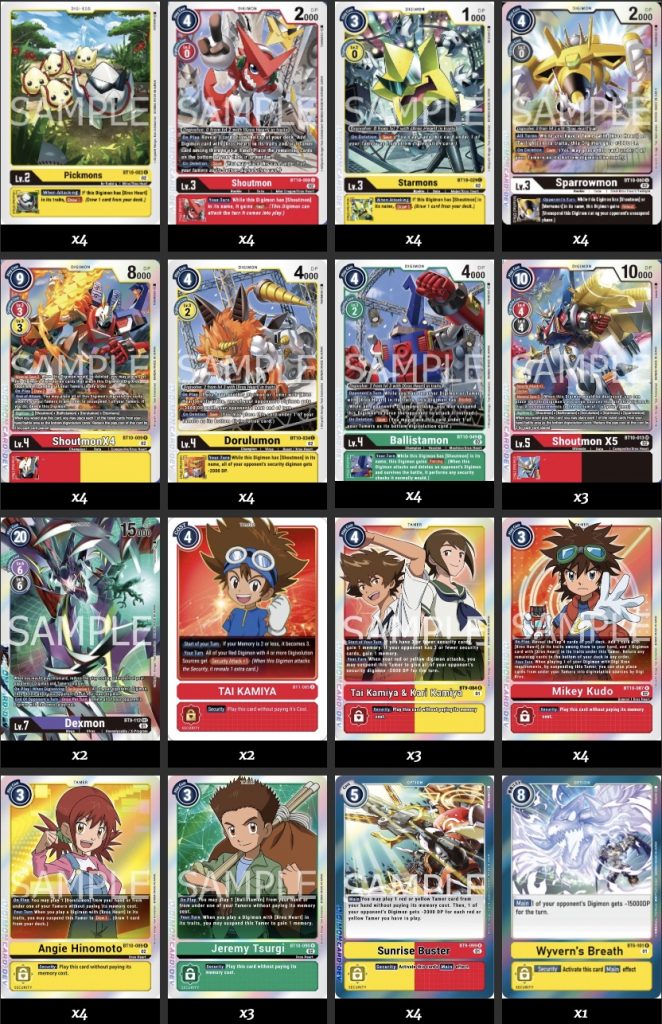 In BT-11 we finally have the new OmniShoutmon and ZeigGreymon cards, Running both cards in the same deck would mean a different composition from Xros Heart 1.0 (since there is simply no space for these new digivolutions).

Judging from their effects, these cards focus on board control rather than the aggressive rush mechanic from 1.0. 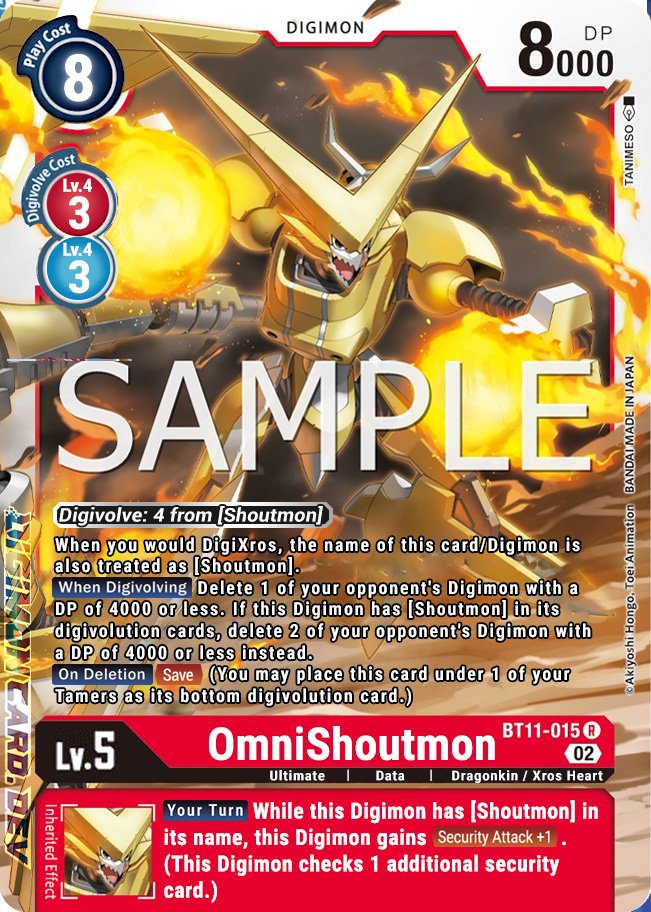 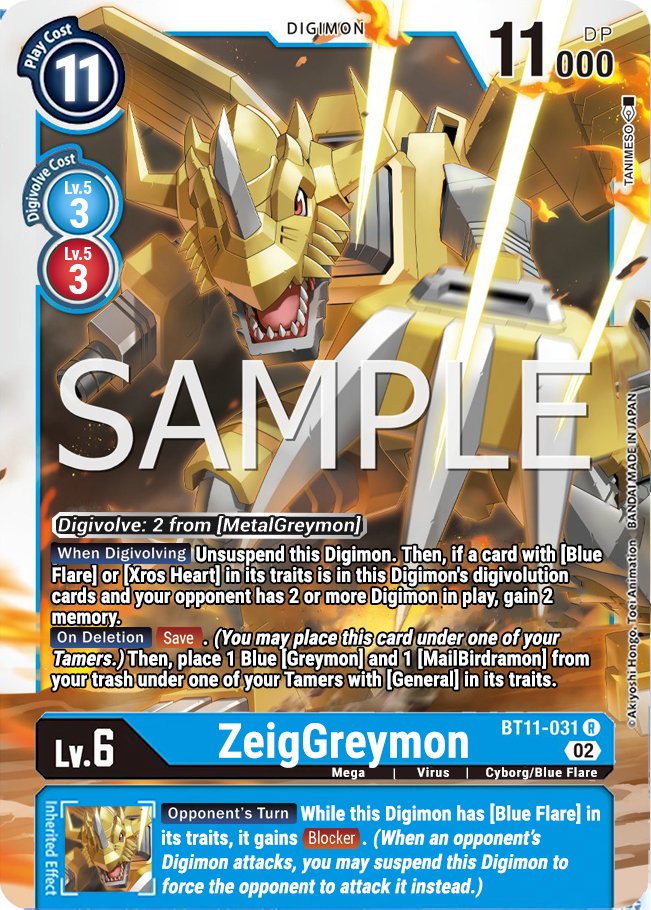 The new Shoutmon DX is an expensive DigiXros between the 2 cards above, requiring a huge 7 cost even with both materials. However, if we look in another perspective we see a 7 cost card that deletes an opponent's LV5 while freezing another for a turn, while setting you up for a bigger X7 in later turn.

In a way, DX also helps gel the odd pieces of Taiki's Xros Heart with Kiriha's Blue Flare roster, since the deck may not have space to run the incompatible digivolution lines of Shoutmon and Greymon. With DX, we can run either a Xros Heart or Blue Flare as base, and throw in the other OmniShoutmon or ZeigGreymon to make things work. 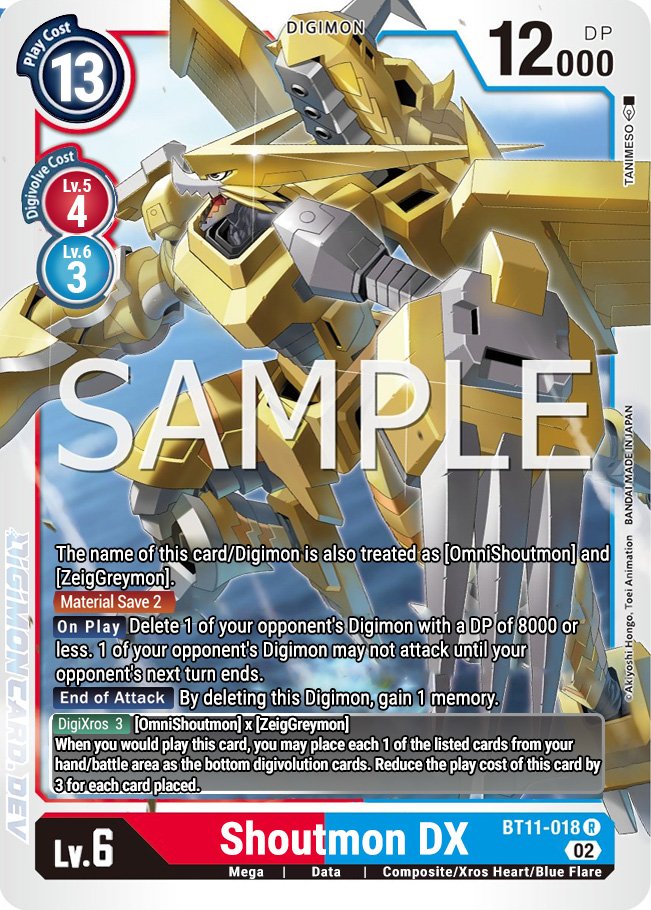 And why play 2.0 if not for Shoutmon X7, BT-11's new badass fusion Digimon. Shoutmon X7 is essentially 2 cost to play when you DigiXros with 6 materials, and deletes an opponent's Digimon when played. Apart from that, his list of effects are very similar to the old X5 (assuming both are ideally DigiXrosed), having [SecurityAttack+1], [Blocker], [Rush], [Piercing], and [Reboot].

So in other words, in X7 we are paying an additional 2 cost for his deletion effect. 2 cost is too much to pay when we are doing multi-attacks in 1.0, but cheap when we need board control. 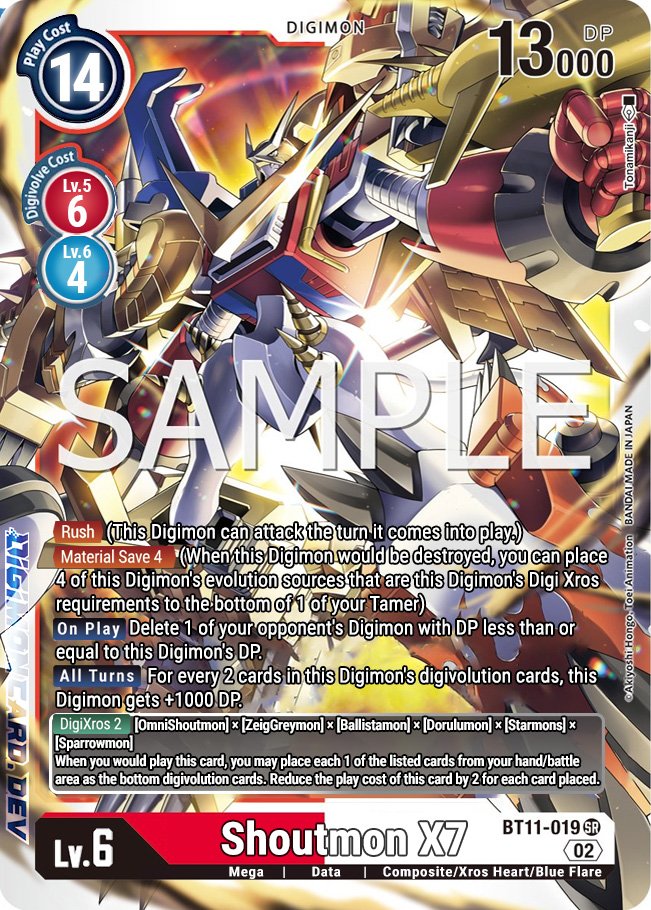 And since 2.0 will break free from the chains of Xros Heart 1.0 and Blue Flare 1.0, it has a new supporting tamer [Taiki & Kiriha & Nene]. This card is sort of a union of effect from all of BT-10's tamers, having Taiki's and Kiriha's effect of pushing materials from tamers, Angie's draw power, and Jeremy's memory gain.

By consolidating several tamer effects into a single card, 2.0 may try to deviate from 1.0 in terms of reliance on large number of tamers. In a way, this card becomes a superior version of BT10's Taiki and Kiriha, and may well find its way to replace them in those deck variants. 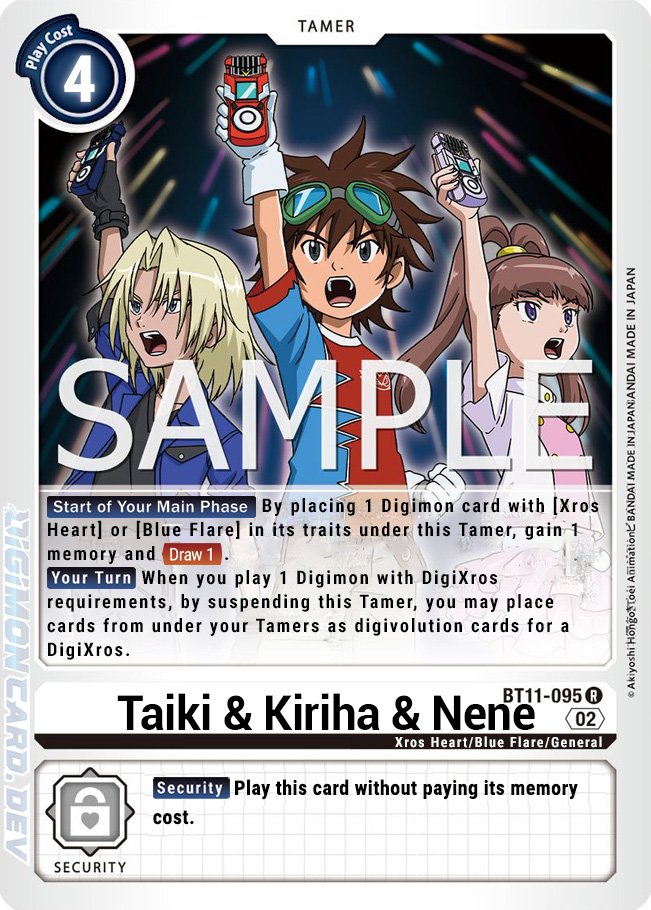 While the older 1.0 has seen huge success in competitive gameplay, it may begin to succumb to several decks in 2.0, namely the new Blackwargreymon and Phoenixmon decks. Blackwargreymon can cripple 1.0's huge reliance on tamers while Phoenixmon's sheer number of blockers can slow down offence, and the generic 1.0 deck may lack deletion cards to turn board state to their favour.

2.0 meanwhile can be tad too slow against many other decks, but trades off speed for better board control. This deck throws bigger Digimons at your opponent (such as DX and X7) and forces your opponent to react to them, and such decks typically can be more robust against a larger variety of matchups.

Personally I would feel that 2.0 frees up more deck space for cards that counter a variety of matchups, which is important given the many new decks and enhancements coming in BT-11 such as Blackwargreymon, Ulforce, Bagramon, and Ragnamon. A largely linear and predictable deck such as Xros Heart 1.0 may very well see its last days coming September end.