With the release of BT11, many archetypes had seen varying degrees of support, some more so than others (cough BwgX) while also introducing full evo lines that have synergies with their respective tamers. Be it a curse or blessing, these evo lines (Phoenix, Ulforce, Rusty, Miragegaoga, etc) do not have as tight of a synergy as seen previously in EX03 (Imperial, 4GD, Hina), which allows the pieces more flexibility.

Now, during the early days of release, I’ve personally seen how the new support for leomon: Panjyamon accelerates the spawning of Leomon via Juri, as well as other tamers that grant lots of tempo to your board. One of the iterations of the Leomon package is to use ST-09’s imperialdramon, to spawn both Leomon and Leomon X. However, from personal deck testing, its very hard to get both of them out and it kinda go against the leomon playstyle which is to attack the security as often as you can, die, and spawn a leomon from sources. 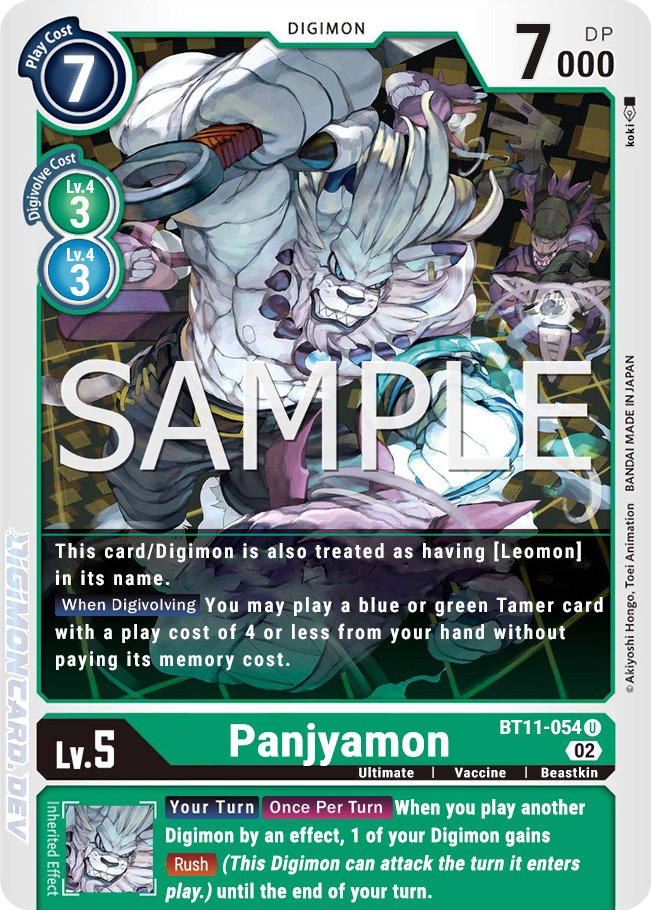 Another tricky thing about this deck is that due to high Lvl 4 count (at least 7 blue leomons, 4 leomon x and 2 hybrids), your ratios will be a little skewered. After much testing, this was most optmised list that I was able to come up with:

While theorycrafting this deck, one of my main objectives was that I needed a way to bounce absolutely anything and everything back to the opponent’s hand to capitalise on Miragegaoga’s OPT effect: when a card is added to your opponent’s hard by an effect, gain 1 memory for every 4 cards in opponent’s hand. With Mirage, you can bounce a security or a lvl 5 or lower card on evo, bibi thunder allows you to bounce a tamer and mega death bounces any digimon back, all being able to trigger the memory gain.

The reason for Jellys other than the use of bibi thunder is to deal with the annoying lvl 3 memory blockers or the dreaded pomumon that prevents the spawning of your leomons. However, the bouncing is rather memory efficient; as long your hand size increases, you can bounce a lvl 3 back, which is a good tempo move.

The leomons along with their X antibody counterparts are there to slow the game by serving as blockers that gain you two memory when they die, effectively limiting the plays that the opponent can do on their turn. Moreover, when evoed into leomon x, you can poke your opponent’s security with little to no repercussion. Same goes for Panjyamon where you can play a blue/green tamer for free, evo up into Panjya X, swing and hope to die (by battle). Of course, the optimal play is to evo up to Miragegaoga to bounce either a lvl 5 optimally or a security and ride that memory choking.

I find that playing 2 blue cards is essential in this deck where at times you may need to fish for panjya x or mirage since both are only at 4 copies in the deck. If triggered from security you can play a tamer for free. A well deserved spot in the deck in my opinion.

Cool boys and Analog Youth allows you to search for your missing links. Although I rarely am able to search for the X antibody cards I need with Cool Boy, the value gained from their side evos are too valuable to miss.

The Good: Decks that rely a lot on drawing (Maste, XH) will find itself getting memory choked every turn. Decks that have a heavy tamer reliance will also find that getting a level 4 and a tamer bounced will be very painful. Will fare reasonably well against decks that rely on battling as a form of removal (grandis etc)

The Bad: Decks that have a lot of hard remove and protection against bouncing. (Bwgx) Dex will also be rather annoying to deal with.

The Ugly: Dukemon will almost always win against leomon by virtue of being able to pop your leomon blockers and out gain the memory loss. Unless you get lucky in your security, its gonna be a rather tough match up if they manage to perform the full flourish

Jelly-Leo-Mirage in my opinion is an extremely fun rogue deck to play in the bt12 meta. With its unique memory control, it does well against certain match ups but less so against others. While it is rather unfortunate that the meta is currently dominated by BWGx at the time of this writing, I am remaining optimistic that once the dust and FOMO settles, this deck would be borderline competitive.