Since I’ll be playing in Super Tamer Battle South East Asia in November, from October I’ve been experimenting with various based of BWGX. I also noticed from the other countries in SEA, Grandis and BWGX has still greater number compared to other competitive deck such as X7. So, in my preparation as Super Tamer Battle Representative from Indonesia, I’m thinking about building a deck for tackling mirror battle and also Grandis.

For mirror BWGX, the BWGX weakness is the opponent has greater DP than the BWGX, also if the opponent can attack the unsuspended BWGX, it will give BWGX a hard time. That was why I prefer using Koromon (BT-9) than Gurimon or Koromon for draw. Because if, somehow I have BWGX and my opponent also have BWGX, I need the extra DP for attacking him.

As for Grandis, I realized my opportunity is not as big as a mirror match. Grandis can hit hard 18k DP. It needs 3 Yuuya Kuga To give my BWGX a 6000 boost DP to resist a full grown Grandis, and what is a chance for having 3 Yuuya in your field and activating in the same time ? a really slim chance. So I scrap the idea, I was cutting Yuuya to from 3 to 1. Grandis usually evolve for 1 to Lv 4, do I have a 1 cost Lv 4? Yes you have. Greymon BT-5 is still exist. 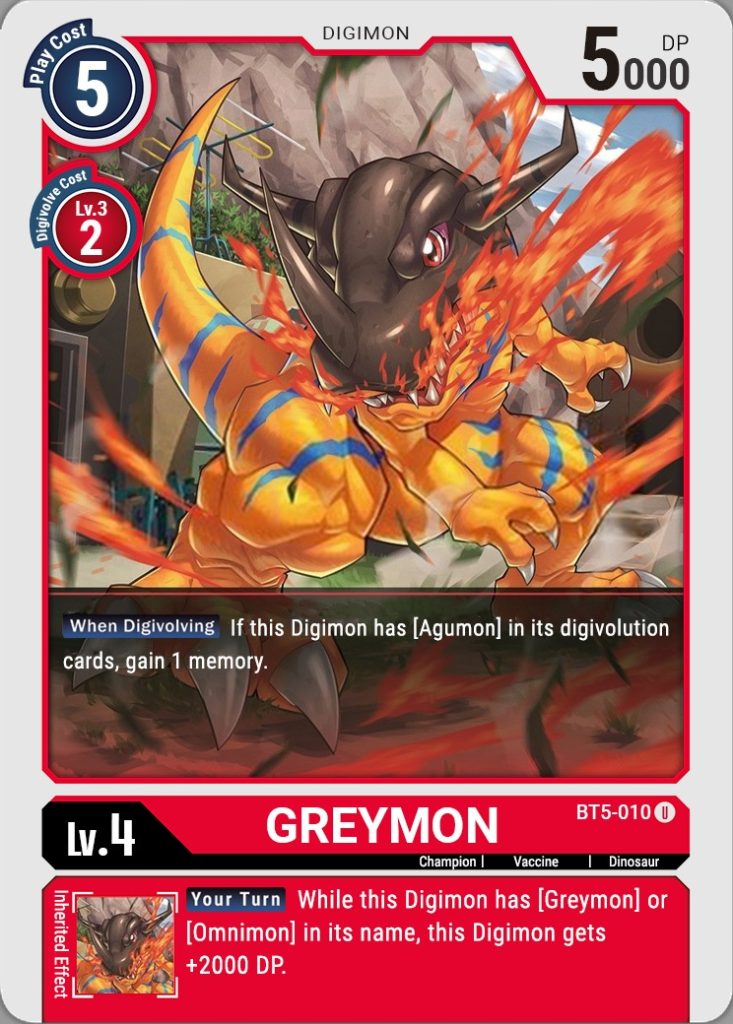 So as the conclusion of how tackling mirror match and Grandis, I think I need to play fast and hard. Way faster than Opponent’s BWGX and Grandis. That is why I’m bringing 4 Greymon BT-5 with me. It doesn’t matter to me come out to the field first and having a chance to die first, as long as I can perform 2-3 security checks before them and hopefully ending the game before their lv 6 exist on the field. That’s why I need a full evoline in my hand, so I need more searcher. What is a better searcher than a memory boost? Yes, 4 memory boost indeed. Because I need Greymon BT-5, I think im gonna using Red memory boost, so bye bye Greymon BT-8, say hello to Greymon ST-1

1st Round – Red Based BWGX

My 1st Opponent was Kevin from Malaysia. When he flipped the digitama I saw koromon and I was like (“What the- its mirror!!). Kevin was using Koromon BT-5 for draw. I happened to have a full evoline to Gaioumon and using Red Memory Boost for the 2nd turn. As for the 3rd turn, I was forwarding my Digimon form hatching area, delaying my memory boost and continue to evolve to Gaioumon, and checking 3 Security because I have Greymon ST-1. It was a smooth 3 checks with 14K DP Gaioumon* Chef’s Kiss*. Next turn his BWGX appeared, attacking and trashing my sec for the next turn. His BWGX also tried to delete my Gaioumon but prevented the deletion by returning X antibody to the bottom of my deck by using Greymon BT-11’s effect. This time, thank God I’m using Koromon BT-9 so I have a 14K Gaioumon with Metal Greymon BT8 Ess, attacking his BWGX and having control for the whole field because he didn’t have any Digimon in raising area, so I played memory boost to passed turn. And next turn, because he still didn’t have any Digimon in the field, I’m forwarding my Agumon from hatching, check his last 2 security with Gaioumon then swing with Agumon for the game.

My 2nd Opponent was Mark from Philliphine. He was using Grandiskuwagamon. This time, I hope that at least 1 of my 3 Hades Force is in the Security. In the early game he evolved to Snimon give me 2 memory, then I played Red Memory Boost giving him 1. This game I choked his memory so much, I always wonder how to pass turn and giving him 1 memory, to slow down him from evolving him to Grandis. He played Mimi Tachikawa BT-1, giving me 3 memory. I evolved to Blackwargreymon BT-8 for 4, deleting his Mimi and giving him 1 and so on. Until the point I’m at 0 memory, then I delay My memory boost to give me 2 memory, then I play again another memory boost to give him 1 memory*DJ Khaleed “Another One”*, while checking and trashing his security. After I trashed his last security I realized he maybe didn’t have any Grandis in his hand, in his last turn he evolved to Grankuwagamon but still in the raising area for passing the turn. So in my next turn, I swing for the game.

My 3rd Opponent was Han Yong from Singapore. When he flipped the digitama I saw Pickmons, although I have the Natural Ability to resist Xross Heart such as redirect and deleting tamers, I still need to be careful and not to greedy. In the early game I didn’t have any Lv 4s even after I used Red Memory Boost in the previous turn, so I delayed my memory boost for 2 so I at 5 memory and hard played Metal Greymon X BT-11 for 8 giving him at 3. He played a lot of tamers for preparations, fortunately gave enough time to evolved my hard played Metal Greymon x to BWGX with X antibody’s effect while attacking. Thank God I had BWGX this early so I could defend myself from X4 repetitive attack, well at least I could redirect 1 of X4 attacks per turn. I tried to choke memory him like I I did on the previous game but the new white tamer Taiki & Kiriha & Nene (TKN General) always gave him additional memory, and with only 1 memory XH can easily play X4 or even X5. In his last turn, my field had BWGX and Agumon, and 1 Agumon in the Raising area with total of 3 digimons. He played 2 X5 with blocker, but the 2nd X5 didn’t have complete material giving me 3 memory. I swing with my agumon from the raising area first, suspend 1 of his X5, and I used Hades Force to delete the unsuspended X5, the swing from the effect of Hades Force ended the game

My opponent at Final was Kelvin Klein Lazam from Phillipine. He was using Jesmon. I succeed in handling Mirror Match and Grandis in this tournament, what about Jesmon? Well frankly, I totally forgot about this deck. I didn’t have any strategies or plan whatsoever. I just hope I don’t brick, and you know what? I finally have fixer/setter tamer for the 1st time in this tournament, also the first 5 cards I draw were Agumon, Agumon X, Greymon, Greymon X and Yuuya. What a nice start! Then what? You may guess, I didn’t get any Lvs 5 for 3 turn Straight. I forced to hard played Greymon 2 times, then played Agumon and passed turn for 3 free memory for the opponent. Maybe my opponent thinks “oh what’s his strategy to keeping his greymon X for 3 turn straight in raising area?” Strategy? No, its full brick straight, when I finally had Lv 5, my opponent already had 2 sistermon, 1 Jesmon GX and 1 Jesmon X and I no longer had any Security. I evolved my Greymon x (finally) to Metal Greymon BT-8, devolving his Jesmon GX. Then I played Hades Force, deleting his 2 sistermon with the total playcost of 7, then attacked his security while digivolving to BWGX using X Antibody’s effect. Next turn I deleted one of his Jesmon X, and I gave him 9 memory for using hades and evolve to BWGX in the same turn. He attacked while summoning more sistermon, I had to redirect the attack sacrificing my newborn BWGX. Then he passed turn for playing more sistermon manually. I neither have Digimon on the fileld nor security, I evolve on the raising area, passed turn and he attacked for the game.

BWGX is all about control, redirecting, deleting while anyone unsuspend, trashing sec and blocking for bonus with the right Ess. If you play fast then you will do all the above faster (minus blocking). I’m not saying my build is the best BWGX build, but it’s a faster one. You can block faster, trash sec faster, redirect faster. And also having a Lv 6 faster than opponent is a bit intimidating for the opponent lol.

I think My MVP for this build is 4 Red Memory Boost followed by Greymon BT-5 in the 2nd place. My memory boost helped me to manipulate and choking opponent’s memory while my Digimon evolve cheaper. Speed up your deck while you slow down the opponent!

The SEA Super Tamer Battle ( SEA STB) consist 10 champions from 5 countries (Indonesia, Malaysia, Singapore, Thailand and Philippines)
Each of the champions is the winner from STB Qualifier Regional that held twice per country. Each tournament consist 20-32 participants.
The SEA STB held by Maxsoft one of Official Bandai Distributor in Singapore on 5th November 2022, online on Digimon Card Game Asia Discord (https://discord.gg/9DJHq3Ww)
The champion and the runner up of this tournament will join other 22 participants in South East Asia Finals (Not yet elected) to become The South East Asia Representative in Digimon TCG World Championship (only 1 from 24 participants)