I feel Beelstar has always been a silent powerhouse throughout the different sets with it only slowly falling off as the meta shifted to a more fast paced one.

The problem I feel with Beelstar is that it’s rather slow in building up its trash by relying purely on the draw and discard mechanic of Scattermode and Gabumon. With the introduction of ST-14, we are treated to two new cards that made a milling version of Beelstar more viable – Warring Shots and also the new Beelstarmon.

The strategy for the deck is rather straightforward – as milling is a notch faster than discarding, you mill as much as you can. Each 7 cost option and each card in your trash means a cheaper BT6 or ST14 Beelstarmon. If you accidentally mill any of your key pieces, you can also then recover them with the myriad of trash recovery cards that is in the deck. Once you have reached a reasonably high amount of cards in trash, that’s where the nasty side of the deck kicks in – you get to spam cheap level 6s in the form of beelstars which then goes into Shinegreymon Ruin Mode.

The following are some key cards that really synergises well with each other.

Warring Shots – As a 7 cost purple option, Warring Shots is an auto include in a Beelstar deck. However, it is it’s two Main effect that truly makes it shine. Firstly it destroys one of your opponent’s highest level Digimon if casted from your hand or triggered as a security effect – I see this as somewhat a compliment to Fly Bullet since it can delete a level 7 Digimon. Secondly, when the option is trashed from your deck it gains a delay effect where you can pitch it the next turn to return a purple tamer or Digimon from your trash. While the deck has other trash recovery cards such as calling from darkness or Yamato, warring shots is by far the best as it’s a free card recovery as long as it’s milled from your deck. This card can then be pitched to fetch any Digimon in your deck – be it an impmon if you are bricking, a beelstar to recur it’s effect or to loop a shinegrey Ruin mode to disrupt your opponent’s play next turn. The possibilities are endless.

Shinegreymon Ruin Mode: A good Digimon in shinegrey decks and an even better card in this deck that can spam cheap purple level 6s. Ruin Mode by itself is a tough nut to crack the -5k DP on digivolution/deletion disrupts pretty much all strategies on your opponent’s next turn – this is especially so if you managed to clear their board using your beelstar. Its end of attack effect where it deletes an opponent Digimon along with itself is devastating enough, but it also recovers 1 security for you. In this deck that’s chock full of removal options, a security recovery could mean yet another obstacle for your opponent when they are swinging for your life.

To top it all off, as a purple Digimon, Ruin Mode can also be recovered by most of the trash recovery cards that is in this deck

ST14 Beelstarmon: This card may not seem like much as first but it serves both as discount fodder for your BT6 beelstar, allowing you to run less options that might cause you to brick and to run this instead. As it’s cost reduce by 4 for every 10 cards in your trash, having 20 cards would mean playing this for 5 cost – a relatively cheap price to pay for a level 6. Its two other effects allows you to build your trash and also play an impmon with rush. Playing an impmon in this deck would either mean you mill 3 more cards, or you recover a Beelzemon or Beelstarmon from trash. Both very good effects to be getting for free!

BT2 Beelzemon: I run this as a one off due to the deck being able to recover it from trash rather easily. It’s good in this deck as it allows your impmons a chance to become a huge beat stick and also it’s ability to delete a level 4 on Evo comes in handy when dealing with Psychemon/Solarmon or Chikurimons which would otherwise lock you out of your Beelstars

Darkness Wave: At 1 cost, this card mills 3 cards from your deck, a cheap card to build your trash and potentially pop off a few effects. Also super useful if you are looking to memory choke your opponent

Eyesmon Scattermode: Although the deck centres around milling, this card is still integral as it allows you to cycle options or cards that you don’t necessarily want in your hand for new ones. Evolving this on top of impmon x also means you get 2 mills each swing regardless if it dies or not! (Shoutout to Gum for this suggestion!!) 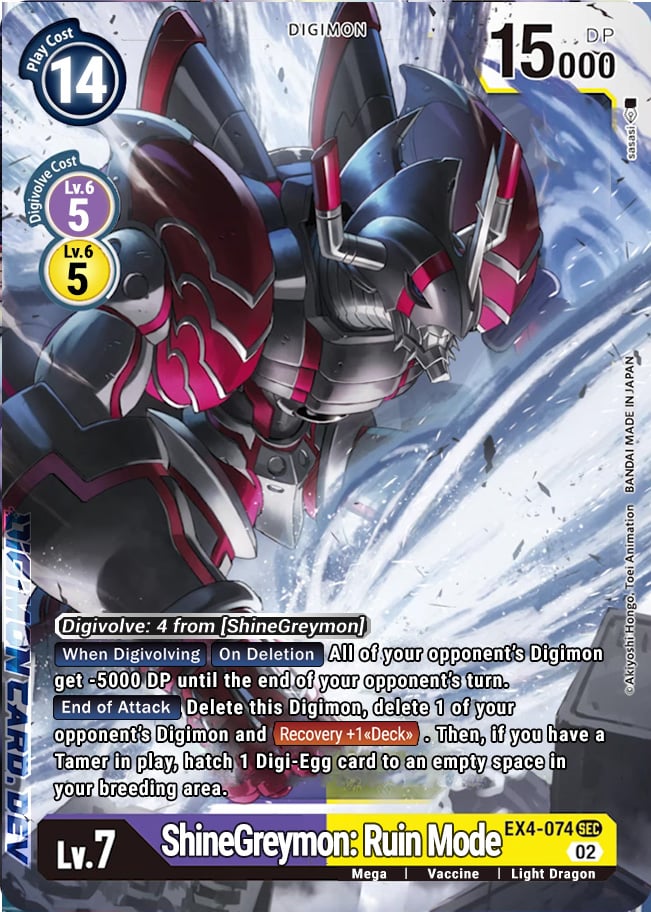 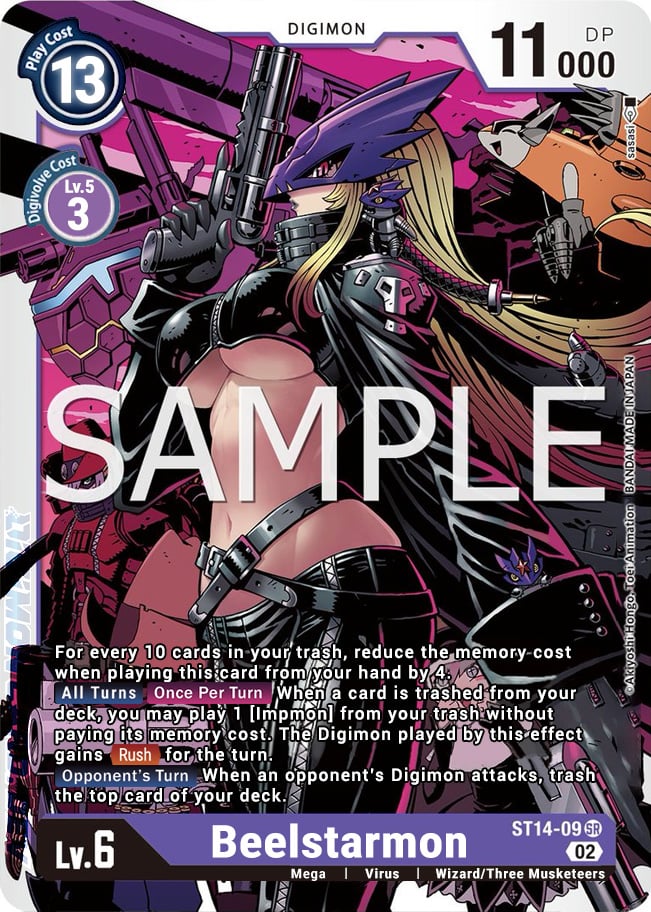 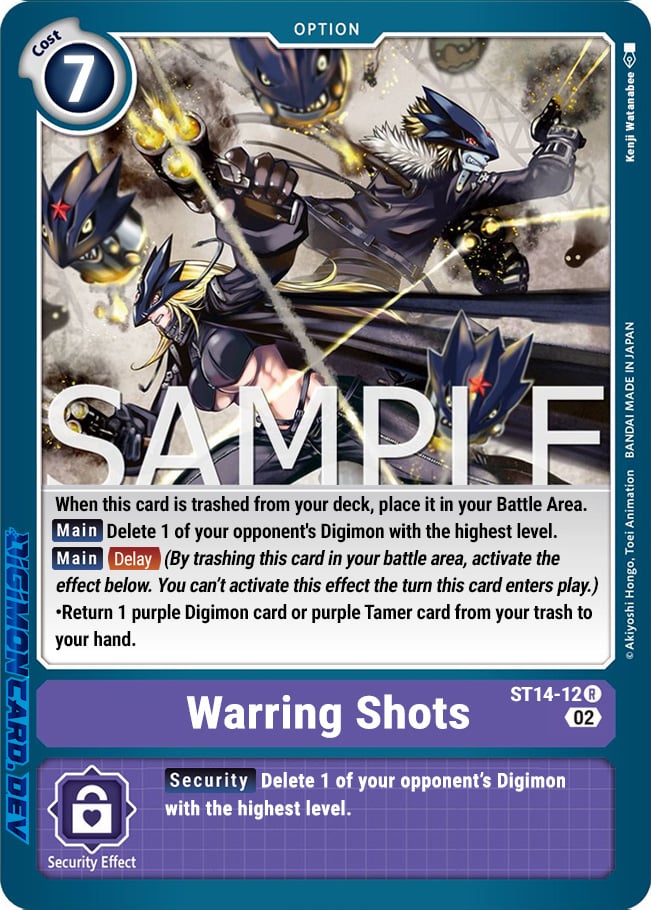 While this deck is a tad faster in terms of setting up and can compete with most decks, it’s still an unfavourable game against fast and aggressive decks like Greymon (especially if they have immunity with X antibody and greymon x) and the sheer destructive power of Grandis and beelze. Those games are usually decided by the power of your security cards which leave a lot to chance. Dedigivolution strategies like blue flare/twilight can also disrupt your ruin mode plays and also deny your ever important on deletion effects. But for the most part you can cruise through them as your Digimon usually are hard casted and so can’t be dedigivolved.
Round 1 vs Wargrey: My opponent started of strong and had a Blackwargrey x with x antibody immunity on board and left me with two security. However at that point in time I had build my trash to a sufficient enough level to play beelstar for 3 cost. I played two beelstar to clear off his Blackwargrey x, before going into ruin mode the next turn to stall him from pushing out his Digimon for a turn while I swarm the field to end the game.
Round 2 vs Shinegreymon: My opponent was not able to get a rookie so he played a level 4 from hand for the first two turns, each of these level 4s then were killed off with an option in my hand. In the second half of the game I sealed off his ability to build his board by killing off his shinegrey with beelstar and using my ruin mode to ensure that his Digimon stays in the nursery and his masarus remain as tamers. Once this was done, a combination of recycling my ruin modes and beelstars to both swarm the board and to close off his field won me the game.
Round 3 vs Xros Heart :My opponent played a X4 on his first turn, passing me to 3 memory. My had was horrible so I paid 13 memory to play ST-14 Beelstarmon, passing my opponent to 10 memory. While I thought this would be game, as it allowed my opponent to build up his tamers to a staggering 4 tamers on turn two, the effect of beelstar came in clutch when he swung into my security after setting his tamers up, milling a BT2 impmon which allowed me to play it due to beelstarmon’s effect.
On my next turn, I swung with my impmon which then milled 3 and this again recycled an impmon with rush due to my beelstar’s effect. This along with some good mills with darkness wave saw my trash reach a decent amount and allowed me to start playing bt6 beelstarmons to start wiping his board. And as usual once the board is all cleared, beelstar goes into ruin mode to further lock things down.

Tips when playing this deck:

1. When given the choice, always try to go for mills rather than drawing and discarding – most key effects of this deck only triggers when they are milled. Your Eyesmon exists as a backup and as a way to unbrick your hand
2. Don’t be afraid to pitch your warring shots’ delay effect early in the game to retrieve impmons or other cards that help to set up your trash
3. Always try to digivolve up to a ruin mode in the same turn that the first copy is deleted. This sets enormous pressure for the following two turns and will likely win you the game – this may sound hard but it’s easy to pull off in this deck if you use your cards at the right time
4. You can discard your beelstarmons if needed. You can always find a way to fish them back to your hand later