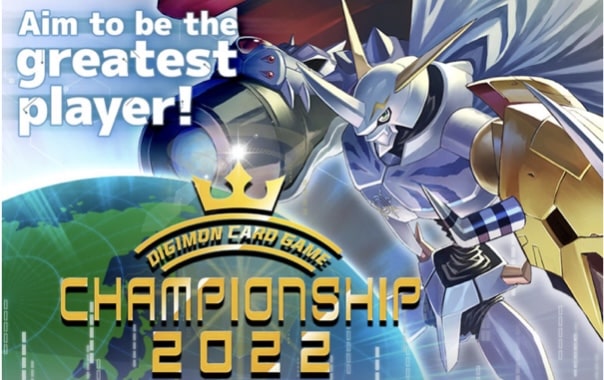 Hi everyone this is me again, Professor B, B for Biktory from the Philippines and I would like to share my tournament report and thoughts about ” The DigiXross Private Schoolbus”. Ok, just kidding. I’ll lessen my jokes for this article since this covers a High level tourney experience.

I, Mark Beloy was supposed to be a Grandis player for the 2nd round of Asia Qualifiers!

Putting some thought into it, Bwargreymon is the most popular deck right now because of the abusive combo of Greymon X, and Hades force. To counter it, Grandis is necessary. But what should counter Grandis while also holding it’s own against Blackwargreymon?

Why is Blue Flare strong in the current meta

It is already strong using the BT10 parts, but with the addition of EX04 Gaossmon, Kiriha/Nene dual tamer and another set of Greymon, Mailbirdramon and metalgreymon, it ensures you that ever card you draw or reveal using blaze memory boost is usable. 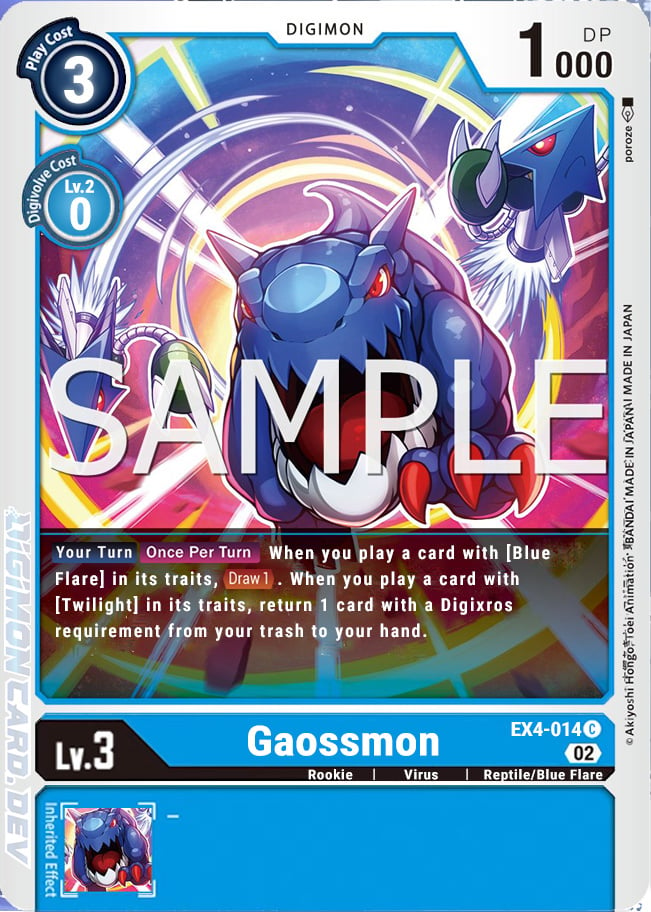 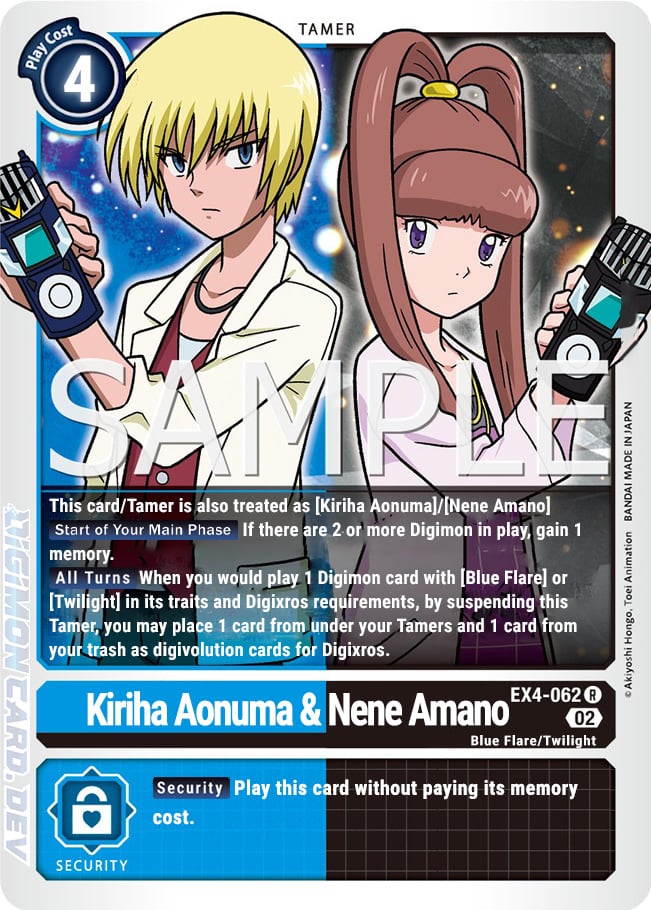 It is already strong using the BT10 parts, but with the addition of EX04 Gaossmon, Kiriha/Nene dual tamer and another set of Greymon, Mailbirdramon and metalgreymon, it ensures you that ever card you draw or reveal using blaze memory boost is usable.

Nene and Kiriha lets you gain 1 memory if there is 2 or more Digimon on the field, regardless of ownership. It also lets you be  more aggressive because you can use a Digimon from trash as a Digixross requirement. 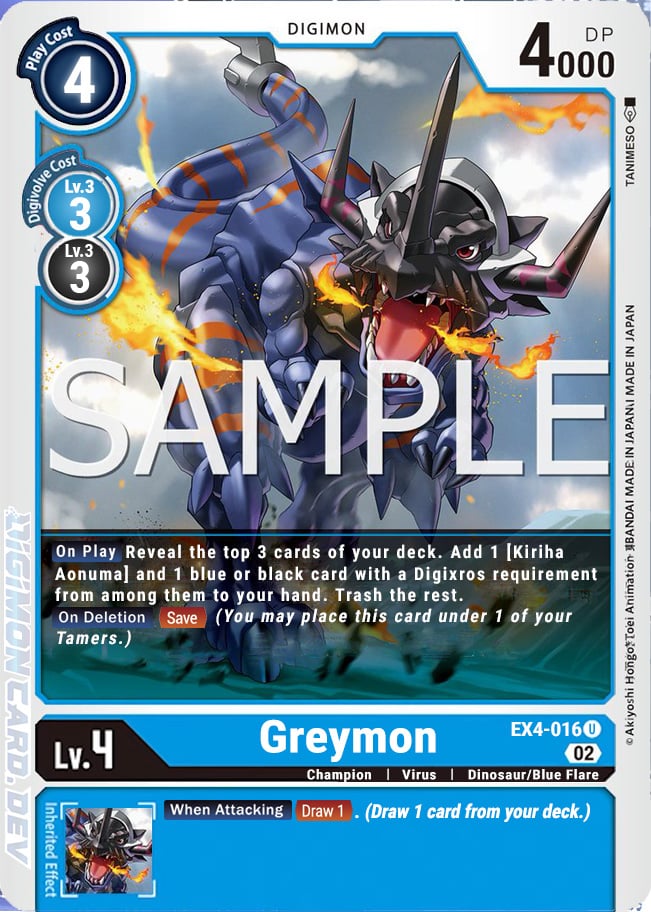 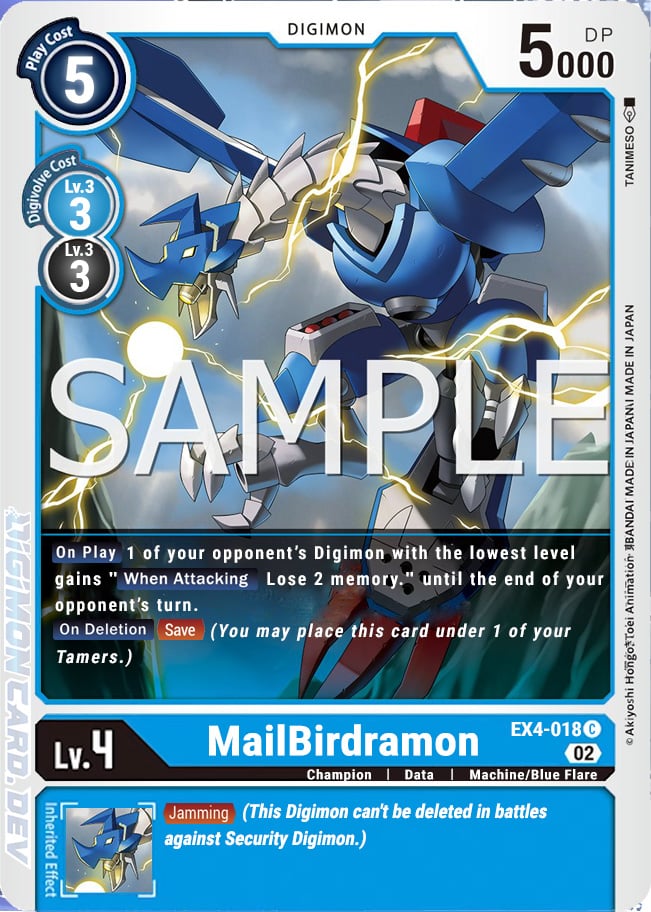 EX04 Greymon and Mailbirdramon adds jamming and Draw 1 to the existing arsenal of the inheritable effect. Jamming shoots up the tempo by ensuring that you get at least 2 checks whenever there are 2 digimons on your opponent’s field.

Ex04 Metalgreymon is such a strong card because it lets you choose which 2 sources to remove from a Digimon, imagine removing the lvl 5 and lvl 6 sources then playing dexmon to such a devastating effect.

With those current lvl3-5 you can already win the game, all that’s left are cards that give you a way out of certain situations. 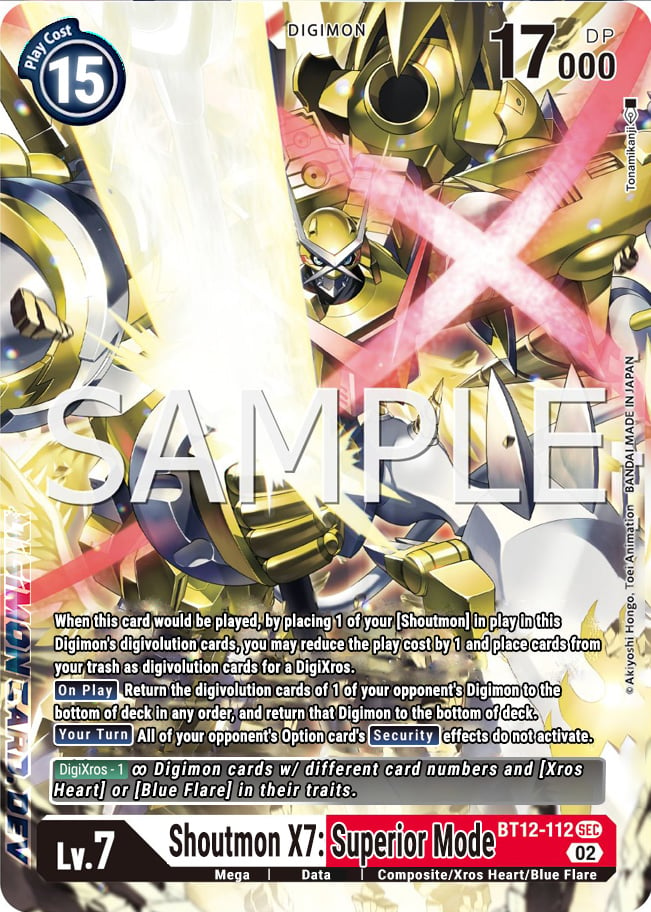 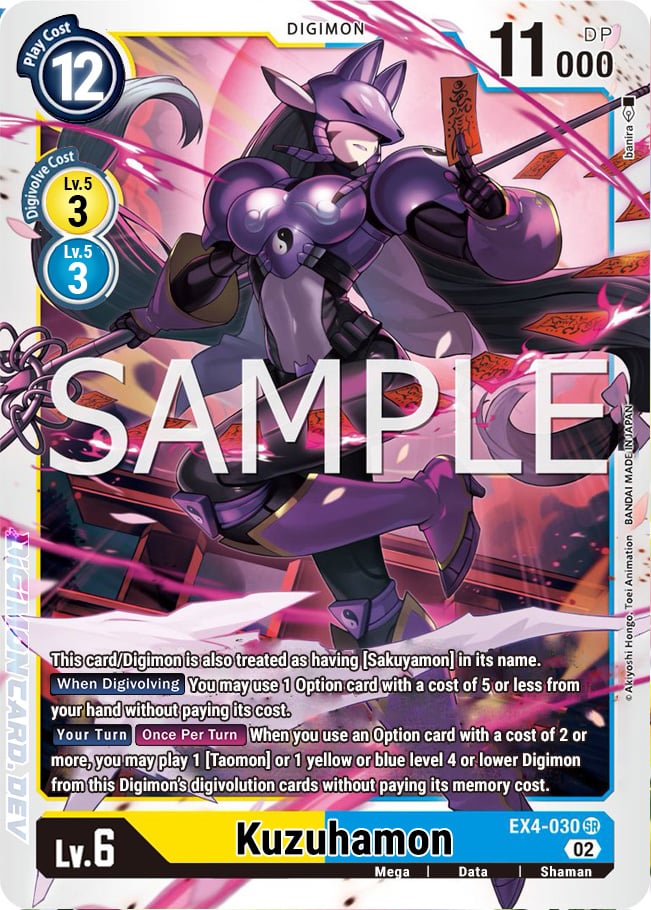 Shoutmon X7 Superior mode is your best counter for unmovable beasts like Bwargreymon, Alter-s, Omnimons and other cards that cancels on delete effect. Big problem is the high playcost, which can be tricked by placing it as a source using Metalgreymon Cyber launcher then playing Kaiser Nail.

Kuzuhamon is another great utility since on evo, it lets you play  a 5 cost or lower option card, perfect for kaiser nail and blaze memory boost. Then it plays a lvl4 or lower Digimon from it’s source. Perfect for X7.

Bt11 Zeig Greymon, the Immortal blocker. This card is perfect for Blue flare since it gives blocker, but imagine it being the last source of 3 Metalgreymon Cyber launcher stacked on top of each other. You get a blocker with 3 armor purge and a bonus lvl 6.

Sourai option card is such a strong card right now because there is a lot of red-hybrid and Hunters deck. Sourai stops Arresterdramon superiormode from abusing the end turn attack since the sources will now be insufficient.

This is a stressful tournament since you need to aim for consistency. B01 games translates to “who bricks first loses”

Started my opening hand by digivolving gaosmon in raising area then ended up having to play Blaze memory boost, I was forced to do so because I bricked. Luckily it reveals a tamer which was played, X7 and a greymon launcher.seeing that together with a kaisernail from my hand braced me for the incoming black wargreymon. Which he did. The abusive combo of digivolving from Greymon x to 1 cost metalgreymon, then play hades force deleted my tamers then he checks for security. Luckily, I got a memory boost from security so I was able to pull off my Metalgreymon BT10, digivolve to launcher, insert X7 then kaisernail. The Bwargreymon got bottom decked, and I now have board control.

Round 2 vs Beelzemon-x(tan jia chuang (MY))

I Bricked Hard!! I have 4 LVL5 in my hand. Luckily it was Metalgreymon cyber launcher, so the fight went on as he digivolved up to baalmon then ended up placing 2 impmons on the battle area. I was able to digixross cyberlauncher for 4 cost by stacking the 3 together. The impmons were bottomdecked. Opponent’s last effort got him to digivolve until Beelzemon-x but trashing security is not enough as I was able to rush his security down.

Round 3 vs Grandis(Robin Oh Reactor (SG))

He played a green memory boost without digivolving a rookie. So I used that opportunity to spam my board with Gaossmon which gives me a lot of draw power, while keeping the memory to either 1 or 2. To my surprise, he plays coolboy which also puts me at 1 memory, then I had this crazy idea to Digixros 3 Cyberlauncher and place Zeig greymon for a blocker effect. But still, he managed to go grandis combo on me, clearing my 4 security not even hitting sourai once! All security cards are level 4!! I was confident since he did not have a rookie or a hybrid for finisher, and my Digimon has 3 armor purge. but guess what!! He digivolved into a Quartzmon. Board Locked. Lucky for me, I have a metalgreymonEX04 which only left his sources at lvl3, then even with high memory to be given to the opponent, I called dexmon to dedigivolve + destroy that Quartzmon. GG

Round 4 vs Bwargreymon(William Teh (MY))

Stress is getting into every player right now so we get to be more cautious. We had to make sure that the decks are properly shuffled/randomized which led to a judge call. Then the fight continues as usual. Usual flow for the Bwarg to reach greymon-x hades force combo. But This time, I don’t have X7 to answer. Then we had another judgecall because we need to confirm which comes first, deletion effect of hades on my tamer and gaosmon(which will let me call a Digimon) or the additional attack of the hades.  Whatever happens, I ended up playing cards to stun lock his units. The exchange went on for eternity as the Bwarg Player is so good. Our last exchange was a battle between metalgreymon-x vs 2 of my security. I would have lost because of that 2 checks, but hell yea 1st check was 17k shoutmonX7. We eneded up having “double loss” because of times up, time would have also been extended because of our judge calls.

I got an early advantage with so many attackers, he also security checked more of my tamers which turns into a weakness when he digivolved into a quartzmon. I could not do anything whenever he attacks and trashed my security.

I’m getting fed up of all these Bwargreymon matchups. Luckily I got Syakkomon as my opening hand right off the bat. When syakkomon entered the field, the abusive greymon-x is now forced to digivolve from hatching.

I used that opportunity to relentlessly attack. With some spicy exchange, Sourai option cards here and there, hades force burning the tamers, etc I was able to win in the end.

Round 7 Vs Blue flare(Gan Jie Shen (MY))

Both players know how the decks work. So I kept my digimons to a minimum of 1. To my surprise, I think he ended up having a metalgreymonEX04 suspended, then 2 other lvl4 and below Digimon. I was able to use my own metalgreymonBT10 to attack his EX04, then digivolved it to launcher, and placed another launcher underneath to bottom deck his digimons. Then that sealed the deal.

The overall experience for the Asia prelims round 2 left a strong impression on me. The remote setup was stressful but the level of competition was very high. Out of around 64 participants We managed to bag 5 slots in the top 14, I got Top 10.